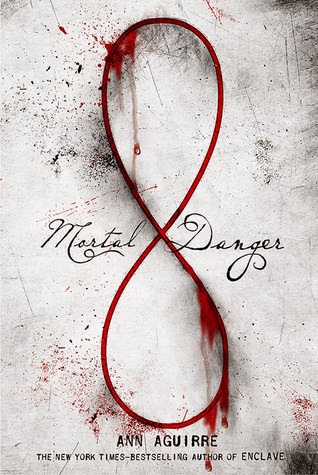 In Ann Aguirre's Mortal Danger, Edie Kramer has a score to settle with the beautiful people at Blackbriar Academy. Their cruelty drove her to the brink of despair, and four months ago, she couldn’t imagine being strong enough to face her senior year. But thanks to a Faustian compact with the enigmatic Kian, she has the power to make the bullies pay. She’s not supposed to think about Kian once the deal is done, but devastating pain burns behind his unearthly beauty, and he’s impossible to forget.

In one short summer, her entire life changes and she sweeps through Blackbriar, prepped to take the beautiful people down from the inside. A whisper here, a look there, and suddenly . . . bad things are happening. It’s a head rush, seeing her tormentors get what they deserve, but things that seem too good to be true usually are, and soon, the pranks and payback turns from delicious to deadly. Edie is alone in a world teeming with secrets and fiends lurking in the shadows. In this murky morass of devil’s bargains, she isn't sure who—or what—she can trust. Not even her own mind.

Um. In general? I don't think I was expecting this book to be what it turned out to be. At all. The summary isn't entirely indicative of the book, but in hindsight, this is a GOOD thing. I was a bit surprised when I reached some parts of the book, and discovered some things. Also, I didn't expect this book to be so... dark. Creepy. Not scary. But dark. Twisted.

Edie is about to commit suicide when she is offered a bargain she can't refuse from a gorgeous boy who seems to know her pain better than she does: she'll grant her three favors, she can get her revenge, but once her favors are granted, she is tied to the company for which he works. Edie takes the deal. She asks to become beautiful, so that she can get revenge on the beautiful, self-absorbed peers at Blackbriar. But things start to occur at Blackbriar, to the people she despises... but it's not her. It's not Kian, the guy who offered her the deal. Something dark is at work, a world in which Edie must find her way.

This book kind of has two parts: the first deals with Edie getting acquainted with Kian and her wishes and the whole bargain business. Also, it has to do with her going to Blackbriar, and feeling in control, for once in her life. The second part deals more with the dark occurrences at Blackbriar and surrounding Edie. Things she can't explain and doesn't understand start to unfold.

To be honest, the first half of this book was boring. I totally understand that Aguirre needed to lay the groundwork for the rest of the book - she did an excellent job of introducing readers to Kian and his deal, his boss, his enslavement. We get to know all about Edie's difficult life at Blackbriar and at home. She had a really hard time at Blackbriar - the "Teflon" crew, as she calls them, are a horrible bunch.

So I understand why the first half was slow, boring even, because the worldbuilding needed to be carefully constructed before the "real" stuff rolled around. And by "real", I mean DARK. The creepy, twisted stuff was more in the second half of the book, and that made things much more interesting. I was bored in the first half of the book, but I couldn't finish the second half/the book fast enough!

I like Edie a lot. I'm not saying I'm terribly ugly (which apparently, Edie was, she was horrible to look at, before the first wish Kian granted her). But in terms of nerdiness... yeah, we're both so there. Talk about physics/science/math nerdiness at its finest. I'm totally like her, in that sense. So I definitely felt for her, in that aspect. My parents aren't physicists, but I definitely felt the slavedriver regime they had me on when I was in elementary, middle, and high school. Now that I'm at Johns Hopkins University studying engineering... well, I've proven myself to them. I think.

Anyway. I liked Edie. I REALLY liked Kian. Kian comes off as perfect, but he isn't. He was also a kid on the verge of suicide, offered three wishes... and roped into the business. That explains his stunning good looks. It also explains why he isn't super arrogant or cocky, like many YA heroes. He's actually adorable and unsure of himself and cautious. I APPROVE.

I already mentioned the plot... let me tell you about the dark side of this book. Without spoiling things, of course. I seriously thought this book was all about Edie getting revenge on her peers. WRONG. That's scratching the surface of it all. Edie's life and wishes don't necessarily matter, in the grand scheme of things. Greater "powers" are at work here, and it gets bloody. Fast. Literally bodies flying everywhere. That's all I'm saying.

Despite my skepticism (after starting the book), I ended up really enjoying this book (as I seem to be doing with Aguirre's books in general). I definitely can't wait to read the next book! I feel like things are just getting started... like Aguirre is going to start blowing up things (figuratively and possibly literally as well).

I already mentioned this before, but the slow start to this book was a little painful, at times. But I understand why it was necessary. So maybe take this "dislike" in a positive light - if you're stuck in the first "half", in which it's all about Edie's makeover and her revenge, keep going. It gets better, more interesting, and creepier. Talk about dark. I don't want to say anything specific because the synopsis mentions nothing about the subject matter to which I'm referring, so I'll keep the "surprises" alive.

Definitely, if you're a fan of Aguirre's books. It seems like Aguirre is a natural storyteller, and this book is no exception to her talent. It's so great that she all but churns out so many books, and they're all really good (in my opinion)! I'll definitely be catching the sequel to this book, as soon as possible. In the meantime, I guess I'll have to be content with reading her other upcoming novels. What a hardship that is, LOL.

4 stars. An excellent start to a new series! This book doesn't just have an awesome cover, but also, an amazing story!