Review: Servants of the Storm by Delilah S. Dawson 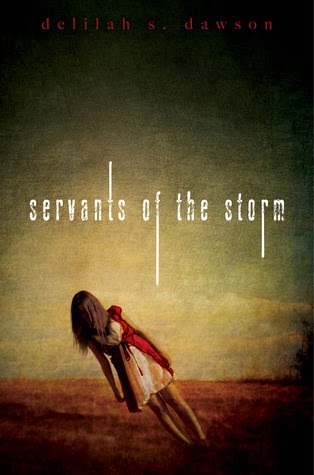 A year ago Hurricane Josephine swept through Savannah, Georgia, leaving behind nothing but death and destruction — and taking the life of Dovey's best friend, Carly. Since that night, Dovey has been in a medicated haze, numb to everything around her.

But recently she's started to believe she's seeing things that can't be real ... including Carly at their favorite cafe. Determined to learn the truth, Dovey stops taking her pills. And the world that opens up to her is unlike anything she could have imagined.

As Dovey slips deeper into the shadowy corners of Savannah — where the dark and horrifying secrets lurk — she learns that the storm that destroyed her city and stole her friend was much more than a force of nature. And now the sinister beings truly responsible are out to finish what they started.

Dovey's running out of time and torn between two paths. Will she trust her childhood friend Baker, who can't see the threatening darkness but promises to never give up on Dovey and Carly? Or will she plot with the sexy stranger, Isaac, who offers all the answers — for a price? Soon Dovey realizes that the danger closing in has little to do with Carly ... and everything to do with Dovey herself.

Oh boy. This book and I did NOT get along very well. I really wanted to like it. I really wanted to get into the story. Like Kresley Cole and Gena Showalter, Delilah S. Dawson, an adult romance author, was venturing into the YA world. And like with Cole and Showalter's YA books, I had hoped that I would enjoy Dawson's YA debut. That was not the case, unfortunately for me.

Dovey's best friend Carly is killed when Hurricane Josephine sweeps through Savannah. At the funeral, Dovey doesn't see her best friend in the coffin though, and for a year, Dovey is put on antipsychotic pills - or what she and her parents think are antipsychotic pills. In reality, they're pills to make her stop seeing demons and demon-related activity. Truth is, Carly was taken by a demon, Kitty, as a distal servant. A year after the hurricane, when Dovey stops taking her pills, she starts seeing demons and Carly. She sees Isaac, and eventually, she figures out what she must do to free Carly.

In the first half of the book, I was genuinely curious. I wanted to know what Dovey saw in Carly's casket, to make her scream and go "crazy" (she wasn't actually crazy, she just saw things that the other humans couldn't see). We don't find out immediately what she saw. And why is she seeing things, now that she is off the pills? Shouldn't she have been seeing them all her life? Will she try to free Carly? I really did want to know these things! Dawson did a great job of keeping the mystery and the questions alive - in the first half.

The demon aspect of this book is kind of cool. I don't read too many books that deal with demons - incubus, succubus, etc. That definitely gave this book an original feel. I also really liked the setting in Savannah, because I don't read too many books placed in the South (for whatever reason, it's not like I avoid them, I just don't think many exist in YA). Dawson does a great job of making sure the Southern setting is known throughout the story (whether with the accent, or collards, etc.).

I'm not a fan of Dovey, or Carly, or Baker, or really anyone... except Isaac. Isaac got this book one of the two stars I'm giving it (the other star is from me being so invested in the first 50% of the book). Isaac isn't a demon - he's human, ish - but he actually has a very good explanation for being freakishly good-looking (read: SEXY) and compelling. I really like Issac, despite his hawtness. He is loyal and protective and intelligent and he's too good for Dovey, or anyone.

That's about it. Read on, brave reader, read on.

I. Hate. Dovey. And this story. And the ending. And basically everything in the second half of the book (except Issac). Things went straight downhill right around, hmm, when Baker gained access to knowledge of the demon world. NEVER INCLUDE HUMANS. Bad deal. Anyway, let me get started.

I don't think I liked Dovey from start to finish. In the beginning, the story starts with the hurricane. Dovey is like a robot or something - does she not have a sense of self-preservation?! While the hurricane is doing its thing, she's kind of just rooted to a spot. CARLY has to DRAG her to the bathroom, and then out of thhe bathtub to the attic. It's really pathetic how Dovey doesn't try and save herself or do anything for herself at all.

And then, as the story goes on, Dovey magically grows a pair and starts acting tougher. I think the author wants to attribute this to her being angry over losing a year of her life due to the pill fuzziness. But it's such a radical change from what she used to be - from spineless to feisty. In my opinion, it's totally fake. I love it when characters are fiery and tough and kickbutt. But on Dovey, it just comes off as pathetic, weak, and trying too hard.

Ooo, how I dislike Baker. That boy needs to learn his place. I totally understand that he wants to be a good friend to Dovey (and the fact that he is totally crushing on her), but he is so stupid and blind and idiotic, it's unreal. It's so hard to like him when he's doing stupid things that he (and the author) thinks are "noble" or whatever. I think it's reckless and DUMB. The scenes at Riverfest, or whatever the demon amusement park is called? All his fault. Total bulls***.

I wasn't a fan of the plot, after a while. The whole story is based on Dovey trying to get Carly free of the demon. Honestly? I'm not that nice. I'm not that good. I would NEVER put myself in deep s*** like that, to free a friend. The friend would NEVER want me to give up my soul for them. What's more, it took forever to get to the climax of the book. I feel like the author put together all of the pieces of the story for readers by about 50% of the book, and then spent the next 40% fluffing up the book for the climax. And then the climax is rushed... ugh, the pacing was just really poor. The part after the first 50% of the book and before the climax probably could have been cut - it was just pointless pages with no real means of furthering the plot.

THE ROMANCE IS HORRIBLE. We know Baker has a crush on Dovey, but it seems like Dovey doesn't feel the same way. Fine by me, because along comes Isaac... and, well, I really like Isaac. He and Dovey are similar in many ways and characteristics. The two of them are more built for the demon world than Baker... ugh, I dislike Baker so much. And I dislike Dovey for many reasons, but especially for allowing him to let himself get entangled in her messes.

Back to the romance. Well, turns out that Dovey *might* like Baker as more than a friend, and that while Isaac is a hot piece of hotness, and Dovey totally likes him, how can she trust him?! Oh, after he basically gives up everything for her to keep her safe, BEFORE THEY EVEN MEET, you can't trust him? UGHHHHH, Dovey.

And the ending. The ending is SO BAD. I don't think I read too many books with endings that are just AWFUL, but this is probably one of them. I don't see any indication of this book being part of a series, but I sure hope for the author's sake that it is a series. Because that ending was poor, for a standalone novel. Not that I'd read subsequent novels, if there would be any. This book was just bad. And the ending was terrible. I don't even want to think about it too much.

Nahhh, I wouldn't recommend this one at all. Read it if you have a copy for review, but DON'T go and buy this one - not at first, at least. Maybe borrow it from the library if you're so excited to read it. But honestly, just skip it. It's not worth it when there are like a bajillion August and September releases that look SO GOOD.

Never trust the pretty, "haunting" cover, you all.

2 stars. Because ISAAC. Because I was actually interested and really wanted to like this book. But 2 stars, because this book was not at all exceptional or "good", and did not leave me pleased or even remotely close to wanting more.