Review: Strange and Ever After by Susan Dennard 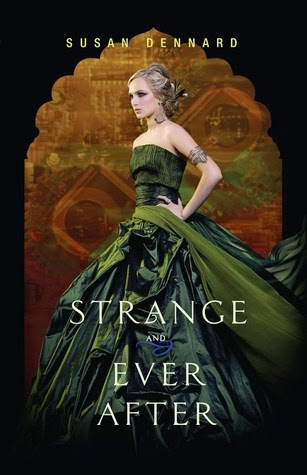 Strange and Ever After by Susan Dennard
Book Three of the Something Strange and Deadly series
Publisher: HarperTeen
Publication Date: July 22, 2014
Rating: 2 stars
Source: eARC from Edelweiss

In the conclusion to the trilogy that Publishers Weekly called “a roaring—and addictive—gothic world,” Eleanor Fitt must control her growing power, face her feelings for Daniel, and confront the evil necromancer Marcus...all before it’s too late.

He took her brother, he took her mother, and now, Marcus has taken her good friend Jie. With more determination than ever to bring this sinister man to justice, Eleanor heads to the hot desert streets of nineteenth-century Egypt in hopes of ending this nightmare. But in addition to her increasingly tense relationships with Daniel, Joseph, and her demon, Oliver, Eleanor must also deal with her former friend, Allison, who has curiously entangled herself in Eleanor’s mission.

With the rising dead chomping at her every move and Jie’s life hanging in the balance, Eleanor is convinced that her black magic will see her through to the bitter end. But there will be a price. Though she and the Spirit Hunters have weathered every battle thus far, there will be consequences to suffer this time—the effects of which will be irreversible. And when it’s over, only some will be able to live a strange and ever after.

Susan Dennard will leave readers breathless and forever changed in the concluding pages of this riveting ride.

I literally just finished this book, so it's still very fresh and raw in my mind. I'm very upset right now, to be honest. This book - and series - was so disappointing. The series started off really well, and picked up speed... in the wrong direction. The second book was a dud, and this book? Disappointing, to say the least. I love historical fiction, I love uniqueness of the series, but I'm not at all pleased with this third book, or series.

In this final novel, Eleanor and the Spirit-Hunters must leave France travel to Egypt to stop Marcus from gaining control of the Black Pullet and immortality, or something (I'm honestly not very sure, haven't been from the beginning). Marcus must pay, revenge is nigh, blah blah blah.

I'm drawing a blank at what I actually liked in this book...  hmmm. I LOVED the new setting. Egypt is literally perfect (and a little cliche) for a zombie-related book. All the mummies! I thought that was cool. The imagery is very rich and potent - I could practically see the murals and corridors and expanses of dust and pyramids.

Oh! I really liked Oliver. Like in the second book, I enjoyed his personality, his humor, even his brooding temper. I loved his relationship with Eleanor - it wasn't always easy, but it seemed like they were friends. They shared a very deep bond, and not just because of magic.

I'm grasping at straws. Moving on.

From the beginning of this book, I had a feeling that I wouldn't enjoy the book. I just *knew* that it wouldn't work for me. I knew that two bloggers I followed LOVED this book. They raved about how good a conclusion novel this was, that the ending of this book was excellent. Honestly, the ending was one thing, but it was by no means the only thing I did NOT like. No, from the beginning, I had problems with this book.

I seriously do NOT like Eleanor, at all. I liked her in book one, not so much in book two, not at all, anymore, after this book. She's whiny, selfish, thoughtless, and this is basically consistent throughout the series. Less in book one. Maybe consistent as soon as she realizes that she has magic. But I really wanted to strange Eleanor more than one time throughout this book - and that's not a good sign.

I didn't like how Eleanor pushed everyone away. I didn't like that in book two, and I hated it in book three. Literally she could not STOP getting mad at Joseph or Daniel or Jie or even Oliver. It was so infuriating, that she couldn't see their side of things, why they wouldn't trust Oliver or even her. It was pathetic how she expected them to love her and coddle her though.

Don't even get me started on Eleanor's relationship with Daniel. It was so on-and-off, back-and-forth, hot and cold. It was the EXACT SAME THING as in book two. I HATE that indecisiveness, the inability to make one's own decisions, to go with something and stick with it. I couldn't stand how Eleanor twists Daniel and bends him to her will, without actually doing anything. She hurts him so much, she doesn't deserve him.

I feel like in general, the second and third books in this series were missing something. The magic of book one was lost in the next two books of the series. I didn't find Eleanor to be as likable, I didn't find the romance tasteful at all, the zombie thing didn't seem as interesting or pertinent... books two and three could have been condensed into one book. They were basically the same book anyone, just in different countries. Please tell me someone else thought this?

The overall series plot is so pointless. Revenge revenge revenge, punish Marcus, stop Marcus. It's so cliche, that Marcus would be looking for something that would make him immortal. Can we be a little more original, please? And the WHOLE SERIES is all about killing Marcus and getting revenge. To me, this particular plot is soooooo boooorrrrrrrrrrrrringggg. Again, books two and three could be condensed into one book, because all the characters are doing is trying to stop Marcus. Book two doesn't set up for an epic showdown, it just sort of drags out the final showdown. Yawn.

And the deal with magic - Joseph's magic, Eleanor's magic, Elijah's magic - I don't understand that at all. I was hoping it would be more explained in books two and/or three, but it never really was. Why do they have magic? Why electricity? Explain things to me, please!

Anddddd the thing I've been avoiding: the ending. Like I said before, I already had a feeling, upon starting this book, that I probably wouldn't like it (this was mostly due to Eleanor's antics alone). I hadn't heard any spoilers or any positive or negative things about the ending. But let me tell you... I HATED the ending. It was so unnecessary. I can't believe that's how the author wanted that particular part of the story to be executed. I can't say anything specific, but dang. If I didn't already dislike the series in general, the ending would have ruined it for me. Straight up.

If you've read the first two books in the series, READ THIS ONE. Finish the series. Get your closure. Most reviews I've seen for this one are positive. You might read this book and love Eleanor and the plot and the ending and be fine.

If you haven't started the series at all, don't. Save yourself the heartbreak and irritation and wasted feelings.

2 stars. This one hurt. And not in a good way. What an awful way to end a perfectly great and original series. I AM SO SAD AND IRRITATED. Hugs and chocolate needed.