Review: I Adored A Lord by Katharine Ashe 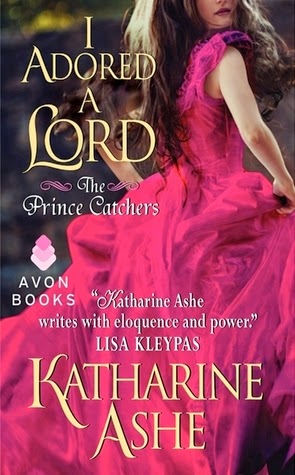 Three very different sisters beguile society with their beauty and charm, but only one of them must fulfill a prophecy: marry a prince. Who is the mystery Prince Charming, and which sister will be his bride?

All that clever, passionate Ravenna Caulfield wants is to stay far away from high society's mean girls.

All that handsome, heroic Lord Vitor Courtenay wants is to dash from dangerous adventure to adventure.

Now, snowbound in a castle with a bevy of the ton's scheming maidens all competing for a prince's hand in marriage, Ravenna's worst nightmare has come true.

Now, playing babysitter to his spoiled prince of a half-brother and potential brides, Vitor is champing at the bit to be gone.

When a stolen kiss in a stable leads to a corpse in a suit of armor, a canine kidnapping, and any number of scandalous liaisons, Ravenna and Vitor find themselves wrapped in a mystery they're perfectly paired to solve. But as for the mysteries of love and sex, Vitor's not about to let Ravenna escape until he's gotten what he desires...

This series is so great! I really enjoyed the first book, featuring Arabella, and I really liked this one, featuring Ravenna! Each book in this trilogy features each of the three sisters. Ravenna is the youngest, and the most spirited. She was sent to live with a vicar at a young age, and they adopted her. This particular book start with Ravenna being invited to a party for a prince, in which the prince is trying to pick a bride. Arabella is sending Ravenna there. Ravenna thinks she is waiting for Arabella, the newly married Duchess of Lycombe, but Arabella is trying to match Ravenna with the Prince Sebastiao. Of course, it doesn't work out that way.

A murder occurs in the castle during the party, and Ravenna takes it upon herself to find out who did it, since she found the dead Mr. Walsh. She and the devilish Vitor Courtenay team up to unearth the assassin. Ravenna doesn't know that Vitor is the prince's half-brother (but not a prince himself). She has no intentions of falling for anyone, but falling for Vitor proves to inevitable and thrilling.

I love the dual parts to this story! We have a whodunit mystery, which actually becomes very interesting and puzzling, and we have Vitor and Ravenna's relationship. Oh, and the prince and his choosing a bride - that is quite funny, in my opinion. There are so many ladies there, vying for the prince's attention. It's like The Bachelor! Ravenna has no interest in the prince (other than friendliness), so she finds the whole deal hilarious.

Of course, she has more important things to worry about, like the murder, and Lord Courtenay's flirtatious advances. The investigator doesn't want her (a woman) involved in the investigation, but Ravenna has a knack for details and discovering things. I like the way her mind works.

I really like Vitor - he is honorable, sincere, noble, kind. Ravenna doesn't seem to understand that he doesn't care that she isn't in the same social circles as him. Heck, he's brother to the prince, but he chooses to be a lord, not a bastard prince. Vitor is extremely intelligent, caring, and considerate. I like him a lot!

The romance in this book takes time, but I love how Ashe builds up the chemistry, and each protagonist's feelings. Vitor is very sure of his feelings, whereas Ravenna is convinced that as nobility, he just wants her for a bit of fun. Which is not the case, but it's understandable. In the end, I love that Vitor never gave up on Ravenna, but also, that Ravenna never gave up on the hope of a relationship with Vitor (even though everything was in her head, all of the doubts and whatnot).

I feel like I haven't said much about this book in general, but it's a whodunit mystery with romance! I've said a lot about the romance, but I can't say much about the mystery, that will ruin things. All I can say is that I LOVE this one line from the book reminds me of this one line in a certain Disney movie.  Tweet at me if you're curious as to what I'm talking about - I don't want to spoil it in my review.

I think the only thing I wanted more was more scenes between Vitor and Ravenna, in which Ravenna wasn't telling him to back off, even though it was quite obvious that she really didn't want him to back off. *winks*

4 stars. Quite a good one we have here! I have much admiration and respect for Katharine Ashe - she is very talented! I cannot wait to read Eleanor's story - will she be the one to marry a prince? Arabella married a duke, Ravenna married a lord (the brother of a prince)... we're getting closer!