Review: Faces of the Dead by Suzanne Weyn 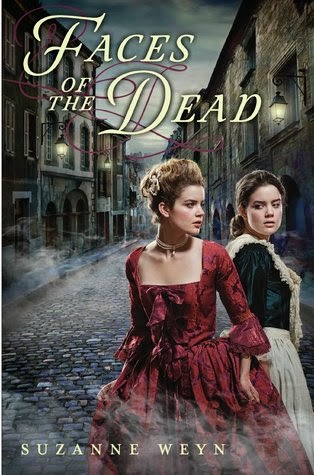 When Marie-Therese, daughter of Marie Antoinette, slips into the streets of Paris at the height of the French Revolution, she finds a world much darker than what she's ever known.

When Marie-Thérèse Charlotte of France learns of the powerful rebellion sweeping her country, the sheltered princess is determined to see the revolution for herself. Switching places with a chambermaid, the princess sneaks out of the safety of the royal palace and into the heart of a city in strife.

Soon the princess is brushing shoulders with revolutionaries and activists. One boy in particular, Henri, befriends her and has her questioning the only life she's known. When the princess returns to the palace one night to find an angry mob storming its walls, she's forced into hiding in Paris. Henri brings her to the workshop of one Mademoiselle Grosholtz, whose wax figures seem to bring the famous back from the dead, and who looks at Marie-Thérèse as if she can see all of her secrets. There, the princess quickly discovers there's much more to the outside world - and to the mysterious woman's wax figures - than meets the eye.

Marie-Thérèse is the French princess of this time. She lives in complete contentment with her father, mother, little brother, and friend Ernestine. She and Ernestine have eerily similar physical features... which always them to swap places. Ernestine becomes the princess for the day, and Marie-Thérèse runs around the palace, enjoying freedom she wouldn't as a princess. One day, Marie-Thérèse decides to leave the palace. Soon, she sees what France REALLY is - a poor country, its citizens starving, destitute, and calling for revolution. Marie-Thérèse stays with Henri, a kind boy who takes pity on her, and Madame Grosholtz, a woman who models faces and sculptures of wax - among other things. The country's situation deteriorates, and the royal family is captured. Marie-Thérèse doesn't want to flee when her family and Ernestine will be killed...

This book is super short, but A LOT of time goes by. It takes us from Marie-Thérèse's childhood all the way through the French Revolution, I believe. Because it's pretty strictly historical fiction, in which it's historically based on a time in France's history, we know what's going to happen to France, to the royal family, etc. But I enjoyed the ride.

I love the vividness of the scenes in this book. Weyn has really brought to life the realness of what was the French Revolution, the starvation, the poverty, the guillotine. The luster of the palace and Versailles and the royalty was easy to imagine. The writing style of this book is pretty awesome, and the imagery is even better. I was impressed!

Even though I'm very familiar with the French Revolution, I was still hooked on the story, and couldn't wait to see what happened next. Especially with the paranormal aspect - I kept wanting to know how that would factor into the book (see below). Knowing the outcome didn't ruin the journey for me!

There is a touch of romance - it's not very subtle, because you know it's Henri and Marie-Thérèse, as soon as Henri is introduced. But it's not insta-love, because they don't "get together" until late in the novel. Nevertheless, the romance isn't overpowering or dominant, which was nice.

Overall, I liked this book. I'm a huge fan of historical fiction, so I couldn't say no, when I saw this one.

This book is getting three stars (versus four or five) for several reasons. For one, I was heavily disappointed by the promised paranormal aspect of the book. Oh, it's there. We know Madame Grosholtz and Rose is up to something. But it was disappointing, once we get to know what it was. I was like, that's it? That's all? And its influence of the story... wasn't all that awesome. I was expecting so much more, in terms of the faces of the dead, the death masks, the "magic", etc. The author just didn't deliver!

That being said, I found the ending to be rushed and hasty. The ending is dependent on the paranormal aspect, as it changes things for Marie-Thérèse. I kind of rolled my eyes at the end, because OF COURSE xyz thing would happen (no spoilers here). And OF COURSE this one thing with Henri would happen too, at the very end. I spoil things, but while I was happy with the ending, I wasn't necessarily satisfied. Everything ended... too perfectly and merrily. In the actual French Revolution, that wasn't the case. But this is fiction, of course.

I would recommend you read this book if you already have it, or were already interested in it. If you've never heard of it, or the author, then it's totally fine to keep going on with your life and pretend you never read this review or saw this book.

3 stars. I'm happy that I had the chances to read this book! Hopefully future novels by this author will be just as impressive, in terms of the imagery, and maybe fleshed out, in terms of the plot and things.