Review: The Arrow by Monica McCarty 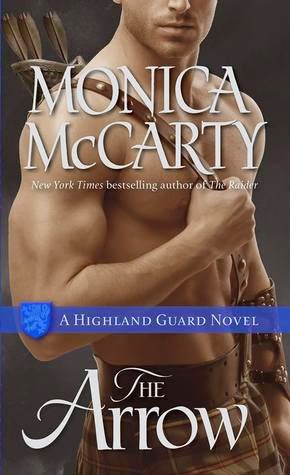 As King Robert the Bruce of Scotland plots to retake his English occupied castles, he needs the stealth and skill of his elite soldiers, the Highland Guard. Fearless and indomitable, no men are more loyal to their king, or cherished by the women they love.

The talents of legendary marksman Gregor “Arrow” MacGregor are crucial now, as Bruce moves to reclaim his Scottish holdings. Gregor is considered the most handsome man in Scotland, and his fame as an archer is rivaled only by his reputation with the lasses as a heartbreaker. But when his infamous face is exposed during a covert mission, Gregor is forced to lay low. He returns home only to find a new battle waiting: a daring game of seduction involving his now very grown up and very desirable ward, Cate of Lochmaben.

A born fighter, Cate was clinging to life when Gregor rescued her after a vicious English raid on her village left her mother dead. But five years later, the once scrappy orphan Gregor took under his protection has become a woman. Brave, strong, and skilled in warfare, Cate is determined to lay claim to the warrior who refuses to be trapped. The heat in his eyes tells her she has his attention . . . and his desire. But will Gregor allow his heart to surrender before danger finds them, and the truth of Cate’s identity is revealed?

First - thank GOODNESS they changed the cover. This new one is MUCH better than the first one. If haven't seen the original cover, be glad you didn't. It wasn't that great. Ab-licious, but not that great, aesthetically. I'm loving this guy's biceps. Arms are seriously important for "The Arrow" - Gregor, the skilled archer of the Phantoms.

Gregor saved Cait when she was fifteen and trapped in a well. She was hiding after seeing her mother brutally raped and murdered by a lord that she has been trying to locate for the past five years. At twenty, she's still in love with the man that saved her, even more so than before. When he returns home for a break, she is determined to show him how she feels, and that he feels the same way about her. But Gregor doesn't want to do wrong by his ward. He feels very strongly towards her, but love? It would be easier to rid himself of her wonderfully distracting self, and marry her off. But more is at stake - Gregor's identity as a Phantom may have been compromised, and the man that killed Cait's mother may be after Cait - and Gregor.

I really, really wanted to enjoy this book. Of all of the Phantoms, the Arrow is probably my favorite. I totally have a thing for archers, especially pretty ones. Blond hair, over-muscled, roguish attitude, arrogant - and an archer. Gregor is a perfect mix of the "best" qualities of a Scottish warrior. I had only read two of the eight books published in this series (before this one), but I was highly anticipating this one, because The Arrow is supposed to unattainable, impossible to ensnare. I just knew his love story would be epic.

Well, it wasn't. You already gathered that I really liked Gregor - I do. He doesn't trust women, and for good reason. Because he's so good-looking, women throw themselves at him all the time, and while he doesn't mind the, um, company (so to speak), he could never trust one to care about them, or more. I love his confident but cautious nature. I also love his perfect physical being, but that's neither hear nor there.

I also really enjoyed the story of this book, minus the romance. Of course, the romance and the story are intertwined, but I really liked how McCarty wove a story into the romance, and an interesting, surprise-filled one at that. I didn't see one of the twists at the end coming. Genius!

I love this series, guys. I've only read three of the nine, but I really enjoyed books seven and eight, and was really excited for book none (the Arrow)! But now, read on.

She's overbearing, bossy, and annoying, and not in a "cute" way, as Gregor and others see her. Gregor took her in when she was fifteen, taking her off the battlefield, away from hurt and ruin. Years later, Cait takes it upon herself to "borrow"/invite in four random "orphans" (they're not orphans, they have families), and surprise Gregor with four new "children". Literally, she says, he's your father, you're their father, the children are yours. She even believes that biologically, they could be!

Right then, from the start, I knew that I would hate her. How dare she dump four children on her guardian's lap, like it's his job to take care of children that he's never seen before, that aren't his responsibility, that HAVE FAMILIES?! And she - she's not even his daughter or sister or cousin - how could she try his patience with her, when he doesn't even owe HER anything?!

It gets worse and worse with her, honestly. Her indolence and stupidity are ridiculous. Apparently she's strong and courageous and clever and intelligent - I saw none of that. I saw a coward, who forces children into a man's hands. I saw a fool, who forced a man to notice her, just like all of the other women were trying to do, always. I saw an idiot, whose feelings were hurt even though it was HER FAULT that Gregor walked away from her - SHE broke his trust. SHE knew what she was doing, trying to "trap" him, which is basically what all of the other women were trying to do. How was he supposed to know that she really loved him? As readers, we see it from her perspective, but looking at things without her perspective, she seems just like a brazen, irritating hussy, trying to catch a handsome, powerful lord.

Hate hate hate her. Sooo much.

Honestly, I hated the back-and-forth in this book. Gregor realizes that he indeed loves Cait about 50% into the book, which is totally fine by me. But then things get to be like a see-saw. Cait does something to try Gregor's trust, Gregor thinks the worst, they make up. Gregor misinterprets a situation, Cait does nothing to disprove it, HER feelings are hurt (God only knows why, since it's HER fault), his heart is broken, life sucks. Back and forth and back and forth.

Basically, I hated Cait, and I really didn't like the romance. The male protagonist and the actual story were great, but not enough to save this one. This book was definitely a disappointment, since I expected so much more for Gregor. I expected his love story to be amazinggggggggg. Like, who could this girl be, that slays the dragon (so to speak). No one remarkable, apparently. I expected better, but Cait made me want to vomit everywhere, honestly.

Hmmm. Read it if you're loving the series, but seriously drop your standards and expect a pile of poo. I'm being totally serious and straight-faced right now. And no offense or disrespect to the author, publisher, etc. But readers, you might enjoy this book more if you weren't super excited to read it and expected little to nothing. I know, it's hard, because we're all like OMG GREGOR'S STORY, GREGOR'S STORY, THIS IS GOING TO BE GOOD.

Get that out of your head right now, and you *might* enjoy this book. Enjoy Gregor, at least. He is magnificent!

2 stars. I'm so disappointed... but I still want to keep up with this series. And I still want to read the first SIX books of the series (must find timeeee). I seriously hope this wasn't the last book in the series? The epilogue kind of made it sound like it is... that would me so sad. Why end on such a horrible note? Sadness.