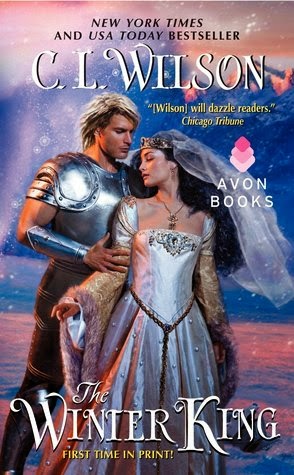 Wynter Atrialan, the Winter King, once lived in peace with his southern, Summerlander neighbors, but when the prince of Summerlea steals Wynter’s bride and murders his young brother, Wynter calls upon a dangerous Wintercraig magic called the Ice Heart and marches against Summerlea.

After three bitter years of battle, a victorious Wynter arrives at Summerlea’s royal palace to issue his terms of surrender. The prince of Summerlea stole Wynter’s bride and slew Wynter’s Heir. He wants the loss replaced. The Ice Heart is consuming him. Wynter hopes holding his own child in his arms will rekindle the warmth in his heart before he becomes the monster of Wintercraig legend, the Ice King.

The Summer King has three very precious daughters whom he loves dearly. Wynter will take one of them to wife. She will have one year to provide him with an Heir. If she fails, he will send her to face the mercy of the mountains and claim another princess for his wife. And so it will continue until Wynter has his Heir or the Summer King is out of daughters.

The plan is perfect—except for one small detail. The Summer King has a fourth daughter. One of whom he is not so fond. And she is a fiercely passionate creature, with a temper as volatile as the forces of her weathergift, the power of storms.

I'm just going to come right out and say it: I really don't like the cover. Yes, that has nothing to do with the content of the book itself, but if you take into account the COVER before reading the synopsis or something, please ignore it. Don't judge this book by its cover. Unless you find the cover stunning, in which case, love the heck out of it! Read this one! Yes yes yes!

I read this book on Friday (July 4th), re-read it on the same day, and then re-read it again on July 5th. And July 6th. Yes, this book is nearly 600 pages. Yes, I read and re-read it in its entirety four times. Yes, I am in love with this book. HOLY CRAP. This book was made for me. Literally perfect, totally made for me. It's an epic fantasy novel (epic fantasy is my favorite), a romance novel (oh my word the romance was AMAZING!), and I loved just about everything about this book. Be prepared for me to flail around and not do this book justice at all because AHHHH, IT WAS SOOO GOOD!!

Khamsin is the fourth princess of Summerlea, the disgraced daughter of the Summer King. She's a legitimate daughter, legitimate heir, but she "killed" her beloved mother, so her father hates her (it wasn't her fault though). Her sisters are known as the Seasons - Autumn, Summer, and Spring. Her brother, Falcon, stole the Winter King's future bride, as well as a really important book. When the Winter King comes to Summerlea to write peace negotiations, he takes a bride - one of the princesses. But he gets duped by the Summer King, because the Summer King gives him a daughter, but not one of the Seasons. Khamsin - Storm - becomes the Winter King's bride by deception, and while he isn't pleased about that, there is nothing he can do. But sparks more than fly between the summer princess and the Winter King, with intense power and sizzling chemistry between the two of them. So much more is at stake though, with Khamsin's brother looking for a legendary sword to defeat the Ice King. Where will Khamsin's loyalties lie?

Okay, I'll be honest - at first, I thought this was going to be a love story that was really just Stockholm Syndrome at play. Yes, Khamsin married Wynter willingly, but it seemed like only because she wanted to save her sisters from the fate, and because marriage to the Winter King was most likely better than being beaten and tormented by your own father and his servants. Poor Khamsin. HOWEVER. In my honest opinion (as always, heh), I don't think this was a Stockholm Syndrome case at all. Khamsin and Wynter fall in love slowly but surely, and trust me, all 600 pages of this book is SO WORTH IT, if only to follow the romance.

And there is so much more to this book than the romance! It's an epic fantasy novel. Wynter is a powerful king, in possession of the Ice Heart (which basically makes him virtually impossible to defeat, with enhanced power, but not immortal or anything). He has a kingdom and vast territories to manage, as well as Falcon and that book to find. Raising the Ice King would be seriously bad. Add on top of that a new wife and an Heir to sire within a year... this book is quite busy!

This book is written in third person, alternating perspectives. I especially LOVE this, in this book. It totally WORKS. The thing is, we know that Khamsin is the innocent princess, thrust into the hold of the big, bad Winter King. So we see Wynter as this villain, the enemy king, the Wolf in a wolf's pelt (literally, this guy is from the Snow Wolf clan of Winterfolk). The Summer King is also a villain, since he beat his own daughter within an inch of her life. But I really love Wynter's perspective, because we get to see inside his mind, the "villain's" mind. He's no villain at all, once you start seeing this his way. His manner seems cruel and unfeeling, but he has reasons, he has ways. I wish I could be more specific, but I won't.

So you know I really like Wynter. He's a total alpha, both physically and mentally, but I absolutely love his subtle compassion. The way he stood up for his new wife, after he had just learned that her father, her sisters, and even she deceived him. That was probably my favorite scene - the frozen hand scene, that's what I'll call it. The way he cared for her when she was sick in the carriage. When he took off his armor, despite the danger of that, so that she could ride comfortably with him. When she was completely broken, sitting in the balcony drenched in rain, completely lifeless. He's insatiable when it comes to some matters, and a total bonehead when it comes to others (you'll see, when they get to Gildenheim), but I didn't expect him to have such compassion. I honestly didn't expect to like him so much. I really do.

I really like Khamsin as well. She's fiery, quick-tempered, jealous, unpredictable as her storm powers, cautious. But she's also honorable and kind. She never betrayed Wynter, never deceived him (except the marriage bit, ha), never did completely stupid, reckless things or wasn't justified in her actions. She's smart, broken, compassionate - just as he is. The two of them are such a perfect match, like moths to each other's flames, or gold and silver. Literally, opposing powers attracting, but that's not it entirely.

I already mentioned that I LOVED how the romance wasn't the only thing in this book. The fantasy is huge, and I just loved how well Wilson constructs this fantasy world. It really is so unique, despite seeming like the typical epic-fantasy-kingdoms-kings-and-queens kind of story. Wilson did a beautiful job of creating and portraying her fantasy world to readers.

I can't seem to say enough about the romance. The romance was breathtaking, in my opinion, as well as it was intense. There is a lottttt of chemistry between Wynter and Khamsin, right from the start. The physical aspect of their relationship is very big, and very crucial. It seems like sex is the only thing that draws Wynter to Khamsin and vice versa, but eventually, that just isn't it. I love this. I love how the physical aspect of their relationship is thrown out there with a crash and bang, and then the mental and emotional side is built up slowly. Usually, I'm cautious when it comes to that order of things, but it worked so well in this book.

The ending was extremely fast, but not excessively so. Like, you won't get lost, but things snowball quickly. I liked the ending a lot. Wynter and Khamsin go through a lot, especially in terms of trust. Wynter's right-hand man Vallik is convinced that Khamsin is a spy for her father, right up until the ending (and honestly, he isn't to be blamed for trying to protect his obsessed king/best friend). But the ending is literally a perfect way to show Khamsin and Wynter's feelings for each other, their trust, and their relationship. Love!

I hope I've at least done this book a fraction of justice. I feel so so so strongly for this book, and I'm not entirely sure that I'm expressing that into words very well. I've read/re-read this book FOUR TIMES, people! Do you know how hard that is, as a book blogger? I have so many other review books, but I was in a total book hangover because THIS BOOK WAS SO GOOD!! *cue flails*

I have nothing to say here! La la la I loved this book a lot, and yes, no book is perfect, but this book is so flipping awesome so we can pretend that it basically is!

If you're put off by the cover, don't be. I dislike the cover, but I LOVE the book.

5 stars. Actually, let's make that infinite stars. This book deserves it. It's rare that my rating of a book is higher than the overall rating of the book on Goodreads. It's rare that I give a book five stars. But that is the case here! I regret nothing, because this book is so worth it!