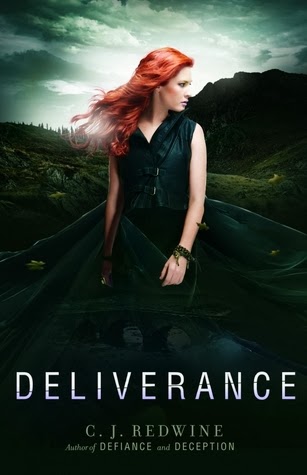 Wow. Just... wow. This book was incredible. I was speechless, when I finished. There was no way I could write my review minutes, hours, almost days after reading it. You know that feeling when a book is so powerful, it resonates within you? Like watching The Lord of the Rings trilogy, and reaching the end, and you're swept away, caught up in the moment, the very powerful moment. That was how I felt, after finishing this book. I knew, I just knew, after reading the description of the first book, reading about the author, seeing its cover, reading it, reading book two, reading book three... that this would be one of my favorite fantasy series. A powerful, remarkable one, at that.

Rachel has been taken by Ian, who is dragging her to Rowansmark. There, James Rowan will punish her for not turning over the device. Logan has been imprisoned in Lankenshire. He pleads his case with the officials of Lankenshire, and forms uneasy alliances with Lankenshire, and the Commander. Logan and his group travel from city-state to city-state, building an army to defeat James Rowan and Rowansmark. But the journey isn't easy for Logan, or Rachel. Trackers, tanniyn, betrayals, secrets, and failures stand in the way of being reunited and and seeking justice.

For once, I wasn't scared to read this one. I have a problem with conclusion novels, just like I have a problem with sequels. Sequels often have cliffhanger endings (like this one, with Rachel being taken by Ian, and Logan being captured in Lankenshire), so that makes the third book really tense and frightening to read. What if everything DOESN'T work out?! What if they never make it back to each other?! What if everyone dies!? The struggle is real.

But Redwine has a way of weaving a tale without making readers go crazy. Or maybe I was actually going insane, but in a controlled chaos kind of way. I just KNEW that Logan and Rachel would find their way back to each other. Even if it took nearly the entire book.

Even if both of them were basically in pieces by the end.

I promised myself I wouldn't peek at the ending of the book, and I didn't. I'm not in the habit of doing that (gosh, what an awful way to ruin a book! You have absolutely no context whatsoever!), but I was so tempted! But I didn't. The storytelling of this book is SO well-done. It's like there's another story within the series in this one book. Redwine is a natural storyteller, so it was easy not to peek at the ending. I wanted to keep reading and reading, not skip ahead.

And to be honest, a lot happens in this book. It's nearly five hundred pages, but it never FEELS that way. This book feels like a TV show or something, in my opinion - meaning, it's highly engrossing and keeps your attention. Also, the descriptions are extremely vivid. Or maybe my imagination is highly active. But I could totally SEE this book happening, in my mind. I love the Redwine didn't just drag us through the mud. Rachel is struggling to escape, trying to stay alive, dodging Ian's temper and vengeance. It's literally life or death for her - if she wasn't wanted alive in Rowansmark, Ian would have killed her. And Logan - all of the unstable alliances that he has to make are tested. His decisions about the tech are constantly questioned. And he often questions himself, if he's doing the right thing by leaving Rachel to rescue herself, essentially.

One of the things that I really enjoyed about this book was Rachel's character development. I really liked her in book one, though I did think she was irrational and impulsive. In book two, she was extremely emotional, unstable, and bent on exacting her revenge on the Commander. I liked this raw side to her, but I wasn't a fan of what I thought was wallowing. In this book, Rachel is tested so much, in terms of survival. There is no room for feeling sorry for herself, or being in shock, or making excuses, or giving up. She has to save herself, and she has to help Logan destroy Rowansmark and the Commander. I LOVE that she wasn't all like, why isn't Logan coming for me, I'm more important than the whole world!? No, Rachel took matters into her own hands, and made decisions to protect herself. Her character development has been carefully spun throughout the three books. Redwine did this masterfully.

The same can be said about Logan. Logan is fiercely protective, always has been. But by the third book, he no longer has the one goal of protecting Jared's daughter. Protecting his people, his family, his girl, his life, holds much more significance. I love that Logan realizes that it's okay to be unsure, to be imperfect, to not always know.

The cast of supporting characters is wonderful! I especially like how much page-time Willow gets. I'm not sure if I liked her or not in the other books, but I REALLY liked her in this book. Same with Quinn. Frankie, Smithson, Nola, Adam... I even felt for the Commander, and Ian. It's amazing how you'll feel, so conflicted, when you get to know the villains of a story. Because to the villains, they are the heroes of their own story.

This is an extremely powerful novel, in many aspects. I love how this book focuses so much on choices, plans, survival, pain, healing. Rachel learns that revenge isn't everything. Logan understands that not be able to save everyone, or plan for everything, or shoulder all the burdens, doesn't make him a horrible leader. The implications of this book are so powerful and noteworthy. I wish anyone and everyone could read this book (series), to understand what I mean about pain and healing and overcoming.

I didn't really mention the world-building or the fantasy aspect because chances are, I covered that in book one or book two's reviews. But I guess I kind of had an epiphany in this book - this story is post-apocalyptic, so it happens on Earth, in our contemporary world, after a disaster. So it is fantasy, but post-apocalyptic. Neat!

Basically... I think this book is awesome. The series in general. Fantasy is my favorite genre, so naturally, I'm very hard on fantasy series. This one is amazing! Go read. *shoos*

Hmmm... I mentioned that I wanted more scenes between Logan and Rachel - and I'm not necessarily referring to the romance aspect. Their relationship is very solid, despite how much they've endured, and I wanted to just see them interact more. I don't think I'm explaining what I wanted very well... but maybe you understand what I'm saying.

Other than that, I'm doing the "feeling" thing with this one, not the "calculating", and it's a four-star read from me. No good reason, it just *feels* that way. Actually, 4.5 stars, but Goodreads and Amazon and Barnes & Noble don't do half stars.

And if you haven't started the series at all... you should fix that. Definitely binge-read the series, now that the series is (almost) over!

4.5 stars. Technically, I'm leaving it at 4.5 stars and not rounding down to 4 stars. A satisfying and thrilling conclusion to a stunning series! I cannot wait to read Redwine's next books. If all of her books are so beautifully, brokenly written, laced with power and infused with pain and endurance, then I'm all about that!