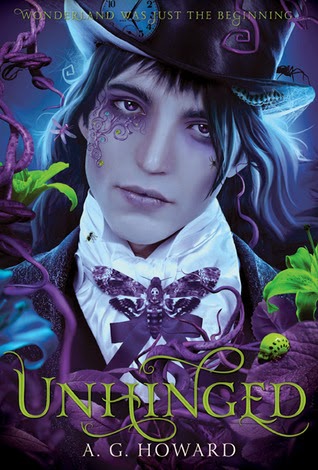 Alyssa Gardner has been down the rabbit hole and faced the bandersnatch. She saved the life of Jeb, the guy she loves, and escaped the machinations of the disturbingly seductive Morpheus and the vindictive Queen Red. Now all she has to do is graduate high school and make it through prom so she can attend the prestigious art school in London she's always dreamed of.

That would be easier without her mother, freshly released from an asylum, acting overly protective and suspicious. And it would be much simpler if the mysterious Morpheus didn't show up for school one day to tempt her with another dangerous quest in the dark, challenging Wonderland—where she (partly) belongs.

As prom and graduation creep closer, Alyssa juggles Morpheus’s unsettling presence in her real world with trying to tell Jeb the truth about a past he’s forgotten. Glimpses of Wonderland start to bleed through her art and into her world in very disturbing ways, and Morpheus warns that Queen Red won’t be far behind.

If Alyssa stays in the human realm, she could endanger Jeb, her parents, and everyone she loves. But if she steps through the rabbit hole again, she'll face a deadly battle that could cost more than just her head.

Purple is my favorite color ^_^

Anyway. You all know my story with this series - I've been following this series since before Splintered came out. I didn't even give myself the chance to read these books until I won a giveaway of both books earlier this year. I saw how popular the first book was, and how popular the second book was, and I was turned off by the hype. However, it's close enough to the release date of book three, and I won that giveaway, so there is no time like the present, to read the first two books!

I was very pleased with this sequel! Sometimes, I find sequels unnecessary, like fluff to the series. Some authors love to drag out the series' plot with the sequel, and "set up" for the big showdown in book three. That was not the case with this book. I really liked this book, and found it an excellent and necessary sequel.

Alyssa is back in the human realm. Jeb remembers nothing from Wonderland. Allison is home, recovered. But things aren't right in Wonderland - the world is deteriorating. Red is hunting, searching, and won't stop until she gets what she wants - even if that means that she will enter the human realm. Everything and everyone Alyssa loves is in danger. It all comes down to prom - can Alyssa, Morpheus, Allison, and Jeb face Queen Red and her army, and save Wonderland?

So this book isn't spent in Wonderland, like the first book is. I really like this. We get to explore Wonderland in book one, and we get to explore Alyssa's human world in book two. In book one, she adjusts to being not-so-human in a not-human world. In book two, she adjusts to being human and not-so-human in a human world. She struggles to separate her two selves - something she shouldn't be doing at all. Alyssa is stubborn, and doesn't want to accept the fact that she is a halfling, she is both netherling and human, and that she belongs in and to Wonderland.

I enjoyed the plot of this book - even if it's a little cliche (save the world! Or, worlds). Don't misunderstand: the plot itself isn't cliche, the general idea of it is. Alyssa must save Wonderland (and the human realm). But how she achieves this is very unique and original. Like book one, book two is fresh and creative. I love the amount of imagination and creativity that Howard puts into these books. I love how Howard bases many aspects of this book on those of the original story, but she spins them to her own use.

One thing I love (that I didn't expect to love) was the fairy aspect. I have to admit - I hate fairy stories. This ISN'T a fairy story though. Yes, Alyssa has wings and basically is a fairy. But this doesn't feel like a your typical fairy, and I like this. I like that Howard made the magic and fairy aspect and lore her own.

Which totally blows because I LOVE Morpheus, as a character, and as a love interest. Comparing the two, I am more intrigued by Morpheus than I am with Jeb. I honestly don't care about or for Jeb. He's great, the tortured artist, with a horrible past, blah blah blah, but I'm just kind of apathetic towards him. Morpheus, on the other hand, is twisted and deceitful and selfless and complex. I hate his guile and deceit, but I love his complicated being.

And as a love interest, dang. He's flirtatious and full of teasing. He's also very caring and kind when he wants to be, when he thinks no one is watching. Alyssa just doesn't get how much he cares. He's not human, so obviously he's not going to follow a human's guide to morals. Ugh, Alyssa. It's okay. THIS Alyssa likes you plenty, Morph.

As much as I hate love triangles, I'm not *too* invested in this one (probably because I resigned myself to the fact that Jeb is "winning" this one). So I don't care. I do and I don't. I don't want to care, but I do, but I can ignore the feels right? Ha.

Bring on book three! I can't wait to read Ensnared - it's going to be quite a showdown. This book set up the showdown really well - but it did so much more! Unhinged took Wonderland and Alyssa's queenly responsibilities and the ROMANCE to another level. Me wants more!

I've already complained enough about the love triangle in my review of book one... but seriously, ugh, love triangles. I don't care for this one because Alyssa really doesn't deserve Morpheus, and yet, she doesn't necessarily deserve Jeb (not that I really like him or anything). It's one of those things where I wouldn't care if Alyssa ended up with either guy or alone. Just not with both (like I've heard about Clockwork Princess?). Because that's just WEIRD. And I would be FURIOUS if that's the route this author would take. It's just... disgusting to think about. And weird. And twisted. In my opinion.

Otherwise... I'm really happy with this series. So far?

I would highly recommend this book, as well as this series. Unhinged is an EXCELLENT sequel to a brilliant start to this series, so if you enjoyed Splintered, you'll enjoy this book. And in my opinion, this is definitely a series to read! Of course, I haven't read Ensnared, so I can't speak for the entire trilogy. But so far, I'm enjoying the ride!

4 stars. It's officially official - I can't wait to read Ensnared! Thank goodness I decided to binge-read the series, because I can't imagine waiting so long in between books, and for the final book. Pure torture, especially for a book with such vicious love triangle. I NEED TO KNOW ALL THE THINGS!