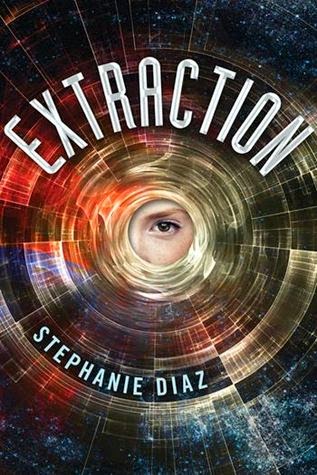 Clementine has spent her whole life preparing for her sixteenth birthday, when she’ll be tested for Extraction in the hopes of being sent from the planet Kiel’s toxic Surface to the much safer Core, where people live without fear or starvation. When she proves promising enough to be “Extracted,” she must leave without Logan, the boy she loves. Torn apart from her only sense of family, Clem promises to come back and save him from brutal Surface life.

What she finds initially in the Core is a utopia compared to the Surface—it’s free of hard labor, gun-wielding officials, and the moon's lethal acid. But life is anything but safe, and Clementine learns that the planet's leaders are planning to exterminate Surface dwellers—and that means Logan, too.

Trapped by the steel walls of the underground and the lies that keep her safe, Clementine must find a way to escape and rescue Logan and the rest of the planet. But the planet leaders don't want her running—they want her subdued.

With intense action scenes and a cast of unforgettable characters, Extraction is a page-turning, gripping read, sure to entertain lovers of Hunger Games and Ender's Game and leave them breathless for more.

Obviously, I didn't love this book. Or even really like it. I can't say I like it, either. I wanted to like it though - I mean, come on. Science fiction? Intense action scenes? Earth's Core? Lethal moon acid? This book sounded kickbutt! And science fiction, no less! And... it's a tour review book. My tour post was originally a review one - well, that got changed, because we can't have a 1-star review on tour!

Basically, Clementine is one of ten sixteen-year-old children to be chosen to be taken to the Core. These ten are the elite, the best of the best, the smartest or strongest (or both) teenagers of this year. Clementine's best friend Logan didn't get chosen last year. He'll be killed at age twenty, along with other rejects. But Clementine is chosen. She is taken to the Core for training. But she slowly realizes that the Commander has been lying to her, to everyone, and that there is so much more at risk than Extraction testing and training.

I was not at all impressed with the first half, hmm, three-quarters of this book. See the next section. However, in the last quarter of the book, I was interested. Or maybe desperate to finish because, dear God, this book is a carbon copy of Divergent. With the space aspect.

You'll say, oh, but the space/planets/moon acid thing is SO BIG AND DIFFERENT. Well, it is, but it's not. We really don't get to see much of this aspect until the last 25% of the book, in which suddenly the moon is super important. So, the last 25% was okay. Interesting, but ehhh, I really just wanted to be finished and be done. Sorry to say that (but not really sorry at all).

I actually made a list of things that I found were disturbingly similar to Divergent. Ready? *Possibly* spoilers. Maybe not though. Depends on what you think is a spoiler. Nothing major.

1. The simulations: Clementine is put under a simulation several times, for intelligence tests. She has to make decisions in the simulations, to show her character, her obedience to the government, her compliance. There is even a FINAL simulation, like how Tris had that last simulation to battle her fears. Eerily similar, eh?

2. Sam (Eric): in this book, there is a character named Sam. He is a ruthless young lieutenant, just under the command of the Core's leader (Commander Charlie, we'll get to him). Sam is bloodthirsty and unfeeling, and takes pleasure in showing off his strengths and picking on weaklings and acting smug. He is just like Eric, but there is one thing that he does that is just like Peter.

3. Oliver (Al): in this book, there is a boy named Oliver. He is weak, has bad eyesight, sucks at fighting, constantly needs people to tell him he'll make it...  and there are a few other similarities that I won't mention. HE IS AL.

4. Ariadne (Christina): if we have Al, we have Christina. Ariadne is feisty and tell-it-like-she-wants. She sticks with Clementine, and stands up for her. She fights her own battles and isn't too bad in training. Christina much?

5. Shots: there are monthly shots, to ensure compliance among Core citizens. In Divergent, the Dauntless were given "tracker" shots, which controlled theirs minds. Which is basically what the shots in this book did.

6. Clementine gets chosen/i.e. she is special (like Tris): Clementine is one of ten teens that get chosen per year. Yet, she has a mental fortitude (like Tris's divergence). Clementine has a clear mind after a certain intelligence simulation, whereas everyone else... doesn't. I say Clementine is divergent, yeah?

7. Ariadne telling Clementine that it's okay to be afraid: and I quote,

You have to understand the context of the situation, but this reminded me of everyone saying that Tris was fearless, of Four saying that fear wakes Tris up. This quote by Ariadne is basically saying that Clementine hasn't been afraid of anything (or shown her fear). Ariadne is telling Clementine to be vulnerable. Definitely a parallel.

8. Sam almost raping Clementine: this is the possible spoiler I was thinking of. It was kind of a drop in the bucket, in this book, and after it happens, we never hear of it again (like it doesn't affect Clementine AT ALL, though she fears Sam - for other reasons). Definitely something Peter would do.

9. Clementine beating everyone in the obstacle course and almost setting a new record: Clementine blows everyone out of the water at the obstacle course. Let me break this down for you: she isn't used to physical activity, but after her strenuous workout (several miles, pushups, etc.), she does this obstacle course in like four minutes. The record (held by Sam, after years of training) is around three minutes, and everyone else got like seven minutes. TELL ME THAT ISN'T RIGHT. An unfit, non-athletic, tired girl beats everyone on her first try, and almost beats Sam? Yeah right.

But the parallel with Divergent - it's like Tris with the simulations. Tris has record-breaking times (though her times actually make sense). Tris is marked when she starts putting up good scores - just like Clementine. Once Clementine starts achieving exemplary things (like the UNBELIEVABLE time at the obstacle course), she is marked.

11. Clementine living in a poor world with little food choice: basically, Clementine is an Abnegation. Except she's an orphan. But she lives in a poor, poor world on the Surface, and she hasn't seen most foods. So when she gets to the Core, and sees all of the food choices, she's like whatttt?? Just like Tris and the burger.

12. "Training" to be soldiers (though no one knows what/who they'll be fighting): they take the top ten most "Promising" teenagers of this year, and train them to be soldiers. Yup, you heard me. All of these nerds get some serious physical training, especially in guns. And what are they fighting? Who knows! At least in Divergent, it makes sense that the Dauntless would learn to fight and use weapons. In Divergent, no one knows who they are fighting (until it is revealed about Erudite and Abnegation). The parallel is very, very similar (I won't say more though, in case someone hear wants to read this book).

I could actually go on, honestly. I stopped listing similarities. This book is entirely too much like Divergent - you can't TELL ME that these are all coincidences. You can't tell me that the space/moon craziness aspect makes this book totally different. Yeah, okay. It's just another dystopian novel in which the poor, everyday people revolt against the elite, and try to destroy the intricate and larger-than-life system that the elite has created. *rolls eyes*

Talk about originality. But anyway, the similarities between this book and Divergent weren't the only things I didn't like about this book. Similarities aside, this book wasn't that great. It was kind of boring, totally predictable, and not that interesting. I didn't care for Clementine (good God, she is dumb. For such a "smart" girl, she is stupid. That stunt in the crowd, looking for Logan? WTF). I have no feelings toward Beechy, Ariadne, or Oliver. Or anyone. I guess I just didn't care. Unforgettable characters? HA! Give me two days, I'll forget all about them. And this book. Cross your fingers.

The romance is pretty horrible, too. Nonexistent, but it's kind of there. We know Clementine loves Logan, but in the end, they both realize they're in love with each other? Or it's adrenaline when they kiss? Honestly, it feels like bulls***. Everything Clementine did, she did for Logan. Which is noble and all... but she loses so much of herself. Like, I don't want to spoil it, but was losing SOME CERTAIN THINGS worth it? Nahhh. Not in my opinion. Maybe that's selfish, but also? Saving the world (in a general sense) is more important than one person's life. No matter how important that person is. In my opinion.

No. Not at all. And not just because it's Divergent. Don't misunderstand me - I LOVED Divergent. I hate copycats, carbon copies, etc. Don't bother with this one. It's honestly not that original, not that captivating, and not worth my time.

1.5 stars -> rounded down to 1 star, because what the heck. I want to say the space aspect might have saved this one... but not for me. In general, this book wasn't for me.