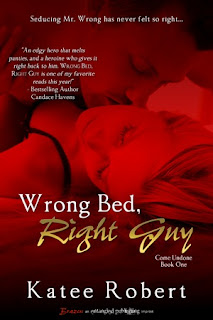 Prim and proper art gallery coordinator Elle Walser is no good at seducing men. Heck, she’s been throwing hints at her boss for months, but he’s completely clueless. Desperate to escape her mother’s matchmaking efforts, she comes up with a plan—buy some lingerie and climb into her boss’s bed. The plan goes brilliantly…until she accidentally seduces a sexy stranger instead.

Bad boy nightclub mogul Gabe Schultz just had the best almost-sex of his life. Too bad the smoking hot blonde thought he was his brother and bolted before he could finish what they started. Though her holier-than-thou attitude puts a serious damper on his mood, Gabe’s never been one to give up on something he wants. And he wants Elle. But does a man who lives on the dark side really have a chance with a proper lady?

What a fun read this was! To be honest, I read it a really long time ago, over the summer, and the way my review schedule is set up, this one and a few other Brazen titles were pushed back and scattered throughout the winter months.

But anyway! I really enjoyed this book! Gabe and Elle are an interesting couple - especially when they first "meet" in the opening scene of the novel. Best. Scene. Ever. But seriously. Imagine if you FINALLY worked up the courage to confront the man you loved head on - only to climb into his brother's bed. Yikes! Can you say mortification?

Well, Gabe wasn't too put off by the idea of a scantily clad female joining him in bed - nor was he too perturbed when he found it who it was, and decided to pursue her. The chase in this novel is hilarious - Elle tries to do everything to stay away from Gabe, physically and emotionally.

I really liked Gabe, and Elle, both separately, and as a couple. Gabe is the epitome of an alpha male AND gentleman combined. Elle is a control freak, but also a nervous wreck. The two of them balance very nicely, and it's so fun to read as they interact. They're a disaster, but they're not.

The steamy scenes are, well, steamy. I like how Robert puts the chemistry in the forefront of the novel, but you can still feel the characters falling in love. Of course, this means that there was a happy ending, right? Yes, it is a happy ending - but hopefully, Robert surprises you at least a little!

Short review, I know, but this book is short, and it was enjoyable.

At times, Elle got on my nerves. She acts so prissy and uppity sometimes! I mean, everyone has their flaws, but she's a bit of a drama queen in some scenes. Like, give the man a break! I feel like the man always has to work extra hard to hold on to the woman... it shouldn't always be so one-sided.

And Gabe's dark side? Not so dark, in my opinion. Don't make him out to be "badder" than he really is.

Sure! I liked this Brazen novel. Most of the Brazen books are pretty great - this one included! But seriously, this novel is definitely for mature readers. I'd say 18+, but I think I was still 17 when I read this one. You get the idea though.