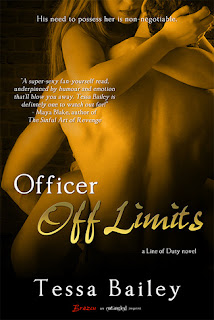 His need to possess her is non-negotiable.

Story Brooks’ fiancé just called off their wedding two weeks before the happy day. As if that isn't bad enough, her semi-estranged father, an infamous NYPD hostage negotiator, has suffered a heart attack. Not wanting to examine her lack of emotion over the broken engagement, she hops on a plane to reconnect with her father before it’s too late.

Playboy hostage negotiator Daniel Chase has never, not once, been refused by a woman, so when a debate over hospital snack foods with a delectable kindergarten teacher ends in flat-out rejection, he makes it his mission to seduce her. His only obstacle? She’s the daughter of his mentor who implicitly forbade Daniel from pursuing her.

Despite her father’s warnings and Daniel’s troubled past, Daniel and Story can’t resist their intense attraction to one another. But when the reason for her fiancé’s abrupt wedding cancellation comes to light, can Story and Daniel's already forbidden relationship survive?

I bought four Brazen books during their Brazen Bash back in July (I know, it's been that long since I read this book!), and of the four of the books, I think this one was my favorite. Maybe. I really liked this book! It was recommended to me by Jessirae from Words, Pages, and Books, so this one was the first of the four that I bought, and read. Back in July.

I absolutely LOVE how this book stars. Story and her soon-to-be ex-fiance are in a restaurant. A seafood restaurant. Story HATES seafood. Fisher is such a jerk. He takes her to a place she won't enjoy, forces her to sit through his little I'm-breaking-off-the-engagement speech, and doesn't even let her get dessert! I love how Story handles the situation... she is hilarious!

When Story and Daniel meet at the hospital, sparks immediately fly. It's almost expected that after they formally meet each other - as the boss's daughter, and the father's co-worker - and they are alone, things happen. Steamy things happen. Both of them seem to have zero control when they're around each other.

It's funny how they go through the entire story tip-toeing around one another - especially when they're around Story's father. I love how Bailey constructs the scenes where Story and Daniel get together. It's clear to me that they are completely physically attracted to each other; at the same time, I can see how they begin to care for each other.

That was something I really liked - the guy didn't drop everything for the girl. It was the other way around! Sort of. I don't want to spoil anything. There's a happy ending, just trust me.

This is something I'm going to complain about with all the Brazen titles, but I wish they were longer! I generally buy the longest one - the ones that are close to 200 pages or longer. But seriously! Full lengths novels would be fantastic.

Also, I was kind of annoyed with Story and her indecisiveness with Daniel. I'm glad that she made the decision that she did, in the end. But I seriously could not understand her expecting Daniel to make the decision. Poor Daniel... oh, well. Everything ended nicely!

Out of all the Brazen titles, I'd probably recommend this one the most! I loved it! Granted, I haven't read any of the newest titles yet. But this one was fabulous! But seriously... this is a very adult title. You are warned!

4 stars. I need to go back and read the other two books in this series! Good thing I don't have to read each one to follow the series. That's the beautiful thing about companion novels!