Review: After Eden by Helen Douglas 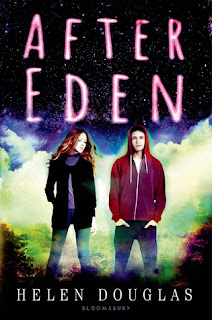 The day Eden met Ryan changed her world forever. Actually, not just her world. Ryan has time traveled from the future to save the world. In a few weeks, Eden’s best friend Connor will discover a new planet—one where human life is possible. The discovery will make him famous. It will also ruin the world as we know it. When Ryan asks Eden for help, she must choose between saving the world and saving her best friend’s greatest achievement. And a crush on Ryan complicates things more than she could have imagined. Because Connor is due to make the discovery after the girl he loves breaks his heart. That girl is Eden.

Well, this novel was certainly interesting! You all know how I feel about time-travel books - I'm generally not a fan. I love Kerstin Gier's Ruby Red trilogy, but outside of that series, I generally dislike the time-travel novels I read.

This one wasn't bad! I was not sure what to expect, when I started this novel, but for the most part, I liked what I got. Douglas carves out an interesting story that isn't too heavy on the science fiction and the time-travel, yet everything is about the time-travel. Everything in the story relies on the time-travel aspect of this book.

Eden and Ryan, and everything changes for Eden. Suddenly, things don't add up. Something isn't right about Ryan and his presence, and Eden isn't the only one who notices. Sure, he's beautiful, smart, old-fashioned, and all-around fabulous, but Eden knows better.

It doesn't take Eden very long to get close to Ryan, and to figure out his secret - he's not from the same time period as she is. Things begin to unravel, and Eden finds herself in the middle of everything. Throw in a jealous best friend, a Mean-Girls-esque crazy girl, and an upcoming ball... you've got quite the story.

This book is really short, and really simple. Eden meets Ryan, they grow close, Eden finds out, Eden helps Ryan, climax, ending. The plot is so so so easy to figure out, and you can totally see where the story is heading. The ending is predictable, and I kind of wished this book ended differently, ESPECIALLY since there will be a sequel.

Nevertheless, the plot was pretty interesting, despite me figuring out everything after reading, like, the synopsis. The novel is set in England, and not the United States, so that was kind of different and cool. There were a lot of differences in dialogue and terminology, which I liked. I mean, I read so many books set in the United States. I liked the change!

The romance is solely between Eden and Ryan, but there are some annoying secondary characters in this book that will probably piss you off. Their roles are understandable, and justifiable, but that doesn't mean I have to like them.

The ending... cliche. See below.

One word (which isn't even a word): instalove. Eden and Ryan don't gently progress into the relationship. They see each other and BAM! They're in love. At least, in Eden's case, that is true. The same could be said for Ryan, but we never get his point-of-view. But seriously, instalove is almost as bad as love triangles. Almost.

And Ryan just seems TOO perfect. He came across as very one-dimensional, as did Eden. I didn't connect with either of them very well. I understand Eden better when she realized what would happen with Ryan (not telling). That part felt raw and totally real. But Eden in general - and Ryan - not so much connection. They were flat and one-dimensional, in my opinion.

The plot was EXTREMELY predictable. I had no trouble figuring out what would happen, EARLY in the book. Like, reading the synopsis, just think of a bare skeleton for this book. That's your plot! The basics! No subtle foreshadowing, or plot twists, or anything like that. This book is very straightforward, and that made it a tiny bit boring.

Oh, and the ending? Cliche. I wish it had been the other way around, especially since a sequel is in the works. I'm not going to say if the ending was happy or sad, but I thought it was too wrapped up and shiny. There needed to be something different about the ending.

Eh. It's sort of up to you. I was actually really excited to read this book, and after reading it, I feel kind of let down. It's not the best science fiction (more specifically, time-travel) novel out there, but it was okay for me. I enjoyed reading it, and I don't regret reading it. It was a short read, so if you have time, read it!

But it's not a must-read.

3 stars. I do plan on reading the sequel!