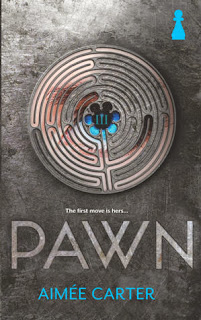 YOU CAN BE A VII IF YOU GIVE EVERYTHING.

For Kitty Doe, it seems like an easy choice. She can either spend her life as a III in misery, looked down upon by the higher ranks and forced to leave the people she loves, or she can become a VII and join the most powerful family in the country.

If she says yes, Kitty will be Masked - surgically transformed into Lila Hart, the Prime Minister's niece, who died under mysterious circumstances. As a member of the Hart family, she will be famous. She will be adored. And for the first time, she will matter.

There's only one catch. She must also stop the rebellion that Lila secretly fostered, the same one that got her killed, and one Kitty believes in. Faced with threats, conspiracies and a life that's not her own, she must decide which path to choose and learn how to become more than a pawn in a twisted game she's only beginning to understand.

One of my first thoughts as I started this book was, oh, the social class thing. That's nothing new. Didn't Kiera Cass do a similar thing, with The Selection? Her system went from one to nine - one being awesome, nine being not-so-awesome (if I remember correctly). In this book, the social classes go from I to VII - VII being the best, I being the worst. So, I was like, really?

And then, recently, I read a book called The Princess in the Opal Mask by Jenny Lundquist, which I rather enjoyed, mind you. In this book, there is a real princess, and then there is the girl who doubles as the princess, for the princess's protection. This book, Pawn, has that aspect in it as well. So, again, I was like, really?

Well, it's a good thing I kept reading, despite my initial thoughts - I totally thought that this book would be very unoriginal. I mean, the concepts aren't really new. I read The Selection. I've read many, many dystopia novels. And I read The Princess in the Opal Mask. So, everything in this book should have felt very familiar, and I didn't think I would like that.

Well, I'm glad I was wrong, in a sense. YES, the idea of this book is not new. YES, the concepts aren't new, the roles of the characters aren't all that original, and quite frankly, the general plot isn't new. BUT, the execution of this novel IS new and original. I thoroughly enjoyed this book, and I'm glad that I stuck with it.

Kitty has been given a second chance at getting a new ranking - a VII. Only the Harts, basically the royal family, get marked as VII. Which makes sense, because they want Kitty to became a royal family member: Lila Hart. All Kitty has to do is pretend that she is Lila, and she gets a life of luxury. But no freedom. No choices. And no Benjy (her boyfriend).

Believe me when I say that the plot of this novel is sooo not what I expected. It was a little slow at first, but once it picked up, I couldn't get enough. Yes, this book deals heavily with a rebellion and a tyrant and deception. But Carter throws plot twist after plot twist, which is really nice, because if she hadn't, it would be a typical dystopia novel, and I might have gotten bored and rolled my eyes a little. Just saying.

But anyway. The plot is superb, well constructed. The romance surprised me. I totally thought there would be a love triangle - there wasn't. At least, not really, in this book. There is one guy who holds Kitty's heart, and by the end of the book, you're sure of that. I like this. No love triangle, no shenanigans.

The ending isn't a cliffhanger, but it definitely leads into the next book. Like, this book could NOT be a standalone. Totally fine by me!

I already mentioned this above, but this book really reminded me of The Selection, and The Princess in the Opal Mask. The similarities weren't overwhelming or overbearing, but I definitely noticed them. For a while, I really thought this book would be just like any other dystopia novel - and it still is, with the rebellion and whatnot, but it's different, and different enough for me to keep reading.

I would! Don't miss this one - it's a great book! The action, high stakes, and different romance makes this one worth borrowing/buying/whatever (wait no, don't steal or pirate, please!). Do it!

4 stars. A really great start to a new series! I'll definitely be reading the sequel (and probably any other books to follow, if the sequel delivers).