Review: Scion of the Sun by Nicola Marsh 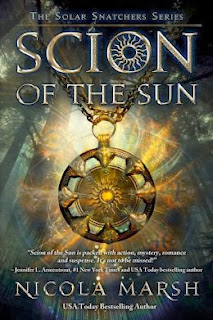 When she least expects it, sixteen-year-old Holly Burton’s unremarkable life is shaken to the core. A vision of the mother Holly never knew leaves her questioning everything she believes.

Eager for answers, Holly enrolls at a boarding school for highly gifted students in Wolfebane, New Hampshire. But Holly's complicated life worsens when she accidentally transports to a parallel existence where she's confronted by a dark and ancient evil.

With the help of Joss, a sexy alpha warrior sworn to protect her, and her new BFF, the equally swoon-worthy Quinn, Holly faces her fears and an unlikely adversary in a showdown that is worse than anything she could’ve possibly imagined …

I can't say I've read too many books based on druid mythology... or any, honestly. I'm drawing a blank, if I have. I love all things mythology, and books that are retellings, or based on a myth, are books that I am more than willing to read. Whether I'll like them or not is obviously a different thing. But I feel like there aren't enough stories based on mythology that isn't Greek or Roman, or even Egyptian.

But anyway. I really liked this book! I had a feeling that I would, judging by the premise, and of course, the lovely cover. I was totally sucked into Holly's world, her story, her problems, her situation. Holly is a character that I connected with, and I enjoyed watching her grow. It didn't hurt that the idea behind this book was very unique! Druid mythology isn't so common in YA literature, after all.

Holly is a student at the school for freak - ahem, I mean, the school for gifted students - gifted in the realm of parapsychology. Holly herself has the gift of precognition - she has visions. Other students in this school have gifts such as telekinesis, psychokinesis, clairvoyance, etc. Not every student has a gift, but all students believe in the idea of supernatural abilities.

Holly discovers that she has abilities beyond those at C.U.L.T. (the school). She's the Scion of the Sun - the one who is decided from a deity, who will find Arwen (it's a thing that could bring about immortality or something), and defeat Cadifor (bad guy). All she has to do is learn about this mysterious Innerworld, hone her abilities, start life in her new boarding school, keep her new friends at bay, figure out her feelings for one hot warrior who is bonded to her... sounds easy, right?

Well, it wasn't. Holly handles what is given to her with flying colors. No, she isn't the perfect heroine, but she never gives up. She accepts reality - her situation - and throws herself into preparing to save the world. Holly constantly provides snark and humor to the story. She always has a witty or sarcastic remark - which I love, because I am totally the same way (in my natural state of being, that is). I really liked Holly, which is important, because she is the protagonist and heroine of the story.

The book is based on druid mythology, so there is a ton of new information that must be brought out and explained to readers (and Holly, of course). In all honesty, most of the information went right over my head, but Marsh brings about the information in a way that it's there, but most of it isn't entirely necessary to know. Like, I went through the book, and I still don't retain most of the terms, but as I was reading, things made sense (despite me not remembering some of the druid terms).

The plot is definitely engaging. There is constant action, or slight plot twists, or something that keep readers guessing, or at least interested. I didn't have a problem reading or finishing this book. Marsh knows her audience well - the teenage voice is prevalent and authentic.

In terms of romance... oh gosh. There is Joss, the sinfully yummy warrior bonded to Holly. He is brooding and overprotective - a total alpha male teenager. I like him a lot - I think he is very grounded, and has seen the worst and best of the world. But then there is Quinn, who lives with Holly in the school. He has no abilities, and he doesn't know about the Innerworld or the Scion or Cadifor, etc. I didn't like him as much. There isn't anything wrong with him - I just see him as a friend to Holly.

This book reaches its crux with the final showdown between Holly and Cadifor. Will Holly reach her mom in time? Will Nan make it out of this alive? Who is the girl with the strange eyes? Why does Keenan want to help Holly's mom? Will Holly find Arwen? So many questions must be (and are) answered by the end of the book. And what an ending it was! I'll be sticking around for book two!

I really only had problems with remembering all of the druid-related terminology. I can't remember most of it - only the relevant terms. And even the relevant terms - like Beltane, or Arwen - I don't really know what they are. I know Beltane is like an initiation celebration for Holly. But Arwen... I have no idea what that is. I don't really know why it is so important (something about immortality?), or why Holly is the only one that can find it, or even what the role of the Scion is.

I'm hoping my question will be answered in the subsequent novels, because I feel like they are very necessary to understanding the series.

I would! It's a unique novel in YA literature, and I hope it won't be under-appreciated! An excellent start to a new mythology-based series, this is! Even if you're not a fan of druid mythology, or you don't know much about it, fear not! Marsh did her research (really well) for this book. And don't worry about the romance (I hinted at a love triangle). Just trust me! Or read the book. Or both.

4 stars. I will definitely be reading the next book! I hope it is as awesome as this book (or more)!