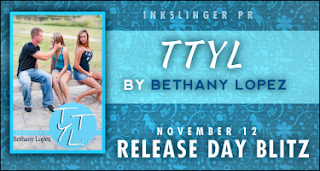 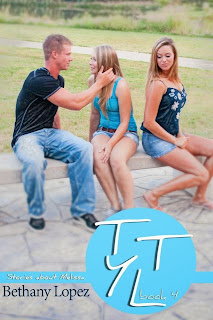 The last few months have been a rough road for Melissa. Her grades have slipped, her parents treat her like a prisoner, and her closest friends are too involved in their own lives to spend time with her. Desperate to escape her depressing funk, she starts spending more time with Layla, who introduces her to a new crowd...the wrong crowd. When Melissa starts to go down a dangerous path, can anyone get through to her before she does something she'll regret?

The club was pretty crowded already, even though the band hadn't started yet. There were people milling around talking, buying shirts and C.D.s from what appeared to be groupies. I was shocked to see that there were a lot of people drinking.

I looked around and noticed that most of the people there went to my school. I recognized a lot of them, although none of them were people I normally talked to.

Mo and Layla maneuvered through the crowd and stopped by a group of guys that looked like poster boys for rebellion.

I looked around the room nervously, then realized that Mo was saying my name, trying to introduce me to the group.

I smiled shyly and said, “Hi.”

One of the guys pushed up from his seat to stand. He walked toward me slowly, seeming to grow taller with every step. His dark brown hair was short on the sides and long on top, and styled in a faux-hawk. His dark chocolate eyes looked a little glazed and the smile he gave me was predatory.

He stepped up close enough to have me back up a step. He watched my movements and smiled down at me, leaning in closely to speak.

“Hey, Sunshine, I've never seen you here before. Believe me, I would've noticed.”

My throat went a little dry as his breath hit my ear.

“This is my first time,” I admitted softly.

He leaned back to look at me, his smile wide. “I bet.”

His dark eyes narrowed in on my face, then looked me up and down before breaking into a grin.

The words stuck in my throat momentarily as I looked at his lazy grin. His lips were full, and I realized I was staring when he chuckled softly.

I looked down, embarrassed, then said, “Hey.”

I looked back up and felt as if I was being sucked into his gaze. My heart pounded in my chest, and it suddenly felt hard to breath. He reached his hand out and spun a lock of my hair around his finger. I watched as he wound it round and round, and my palms began to sweat.

“Where ya headed to so fast?” he asked his voice low.

“Class,” I sputtered. My throat was suddenly bone dry.

“You could always ditch,” he said with a grin as he tugged on my hair. “We could go for a drive.”

Hawk shook his head and began walking backwards, away from me.

“Your loss, Sunshine. See ya around.”

I collapsed against the wall before my legs gave out, cursing myself for being so stupid.

You should have gone with him. Quit being such a baby.That was why, when Layla suggested the shopping trip, I agreed right away. I needed to change my image.

Award-Winning Author Bethany Lopez began self-publishing in June 2011. Since then she has published various YA and NA books. She is a lover of romance, family, and friends, and enjoys incorporating those things in what she writes. When she isn't reading or writing, she loves spending time with her husband and children, traveling whenever possible.