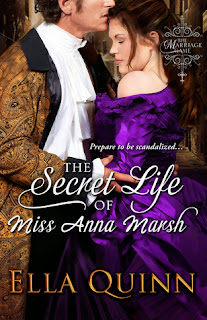 Since she was a young girl, Anna Marsh has dreamed of Sebastian, Baron Rutherford asking for her hand in marriage. But that was in another life when her brother Harry was alive, before she vowed to secretly continue the work he valiantly died for. Now as Sebastian finally courts Anna, she must thwart his advances. Were he to discover her secret, he would never deem her a suitable wife...

Sebastian has always known Anna would become his wife someday. He expects few obstacles, but when she dissuades him at every turn he soon realizes there is much more to this intriguing woman. Somehow he must prove to her that they are meant to be together. But first he must unravel the seductive mystery that is Miss Anna Marsh…

I read the first book in this series - The Seduction of Lady Phoebe, and was hopelessly disappointed by the novel. It was long and very boring, and I found the romance distasteful. I almost wasn't going to read this book, because its predecessor was so NOT my thing, but I decided to give this one a shot anyway.

Well, I can safely say that I liked this book more than I liked the first book... but not by much. I mean, yes, I gave both the same rating, but in reality, it's more like half of a star. There is something in general about Quinn's books that irks me, and I am more than happy to discuss it in the next section of my review. For now, I'll tell you a bit about the book, and what I liked.

Anna Marsh has loved Sebastian ( Rutherford) all of her life. As children, he was her older brother's best friend, and you know how it goes - she totally looked up to Rutherford, and fell in love with him. For Rutherford, he has always known that Anna is the one for him, but he doesn't fall in love with her until, well, the beginning of this book, it seems.

But the "secret" part of Anna's life is that she has taken over her brother's operation, an operation that has to do with the French and smugglers and spies. I actually don't really understand what she does (her role in her "secret" life), but whatever. Either way, Anna is quite certain that Rutherford wants a submissive wife - something that she definitely is NOT.

So, half of the book is about Rutherford convincing Anna that he loves her, and doesn't just want a wife. This is cute and all, but it is only slightly less boring than the first book's romance. At least the steamy scenes are actually steamy. The second part of the book has to do with Anna brother, and Rutherford's mother's goddaughter arriving, and wedding preparations.

AHHH, I HAVE SO MANY THINGS TO SAY HERE.

It's anachronistic. Men of this time period would NEVER let their wives walk all over them like that. As a woman of the twentieth-first century, I can appreciate the way Anna handles her man. But in the nineteenth century, and before that? Not so much. I totally get what Quinn is going for - a headstrong, free-thinking woman how doesn't want to be controlled. But it rubbed me the wrong way. Anna is TOO intrusive. She is too bossy, too nosy, too demanding. I did not like her, when she and Rutherford decided to tie the knot, and after that.

Basically, I didn't like the second half of the book, for several reasons - Anna's behavior being one of them. The other reason would be the fact that the story kind of diverts from the engagement between Anna and Rutherford. We're introduced to another couple, and another love story. This love story is mushed into the second half of the book... which is like, less than a month, or thereabout.

And the climax? Totally anti-climactic. In fact, I don't even know what the climax of the plot was. If you were to ask me, I would not know how to answer you. Climax? What climax?

And you all know how important plot structure is to me.

On the subject of anachronisms (we're not really there anymore, but whatever), there were a lot of dialogue and phrases that were used that were most definitely NOT nineteenth-century English. I think I know twenty-first-century American English when I see it... and not nineteenth-century British English.

And can I just mention how much of a struggle it was for me to actually finish this book? It is so frightfully long, and honestly, I usually have no problems with long books (I LIKE books around 400 pages), but not when the book is, um, BORING. I have not NOT finished a book yet, and I don't plan to do so, but I could have easily started with this one, unfortunately.

Erm. Yes and no. If you read and enjoy the first book, go for it. You're probably one of those people that enjoy the whole "I-am-woman-hear-me-roar" routine (in HISTORICAL fiction novels, that is) - nothing wrong with that! But if you didn't like the first one, don't bother.

2.5 stars -> rounded down to 2 stars. I probably will NOT be reading the subsequent novels - especially if they are anything like the first two novels, in length, plot, romance, etc.