Review: Legend of the Highland Dragon by Isabel Cooper 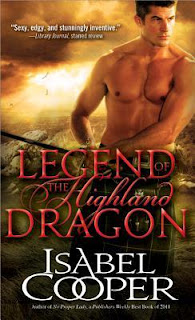 Descendants of an ancient alliance, they live for centuries, shifting between human and dragon forms. Some wander the earth; some keep to their lands in Scotland. And Stephen MacAlasdair, the newest lord of the family, must go to London to settle his father’s business affairs. He brings an object of great power and greater darkness. He finds an enemy from his past, whose wrath is still living and deadly. And he meets an ally he’d never have expected.

1894 London, doesn't provide an easy life for women of the lower class, but Mina Seymour has managed to work herself up to a position as the secretary of a famous scholar. When a tall, dark Scottish stranger demands to see her employer, Mina is irritated; when MacAlasdair's departure leaves the professor worried, she’s suspicious. Determined to figure out the situation, she investigates further - and finds a world and a man she could never have imagined.

Another awesome historical romance novel! But this one was slightly different - it involved fantasy elements! You all KNOW how much I love my fantasy. Historical fantasy (specifically, medieval fantasy) is my favorite genre, so I knew that when I downloaded this book, I'd most likely enjoy it. Historic London + ancient dragon shapeshifters = good deal, right?

TOTALLY RIGHT! I can't even begin to describe how much this book clicked for me. For one, it was thoroughly engaging. I was never really bored, and I followed the story easily. I finished this book rather quickly, even though it isn't short. THAT'S how engaging it is - you *want* to keep reading. I read it in two sittings, and it was two instead of one, because I ate dinner in between.

But anyway. This book begins with Stephen demanding to see Professor Carter, Mina's employer. Mina, the ever-loyal secretary, doesn't like Stephen's attitude. Stephen's behavior makes Mina suspicious, and she goes to his house to investigate (via his house staff) if he is usually so abrasive and demanding. She sees too much when she goes there. And thus begins our story.

Stephen is an immortal - more specifically, a dragon. Because Mina saw him, and other things, she has to stay with him, under his employment as his secretary. The two of them begin to work together to find the man (Ward) that is behind the attack that night (that Mina saw Stephen as a dragon). Sounds intriguing, right? I definitely thought so.

The plot moves quickly. Many small events occur, event after event. It doesn't seem like much is happening, because not many large events happen, but the small events make the plot go by quickly. There is the plot that involves finding Ward, the enemy of Stephen, and there is also the romance, of course. The romance is definitely secondary in this novel, but oh do we know it's there.

I kind of like how Cooper constructed the romance's plot. It's very subtle, so in the first half of the book, you probably wouldn't even think that this book had any romance to it. The chemistry and attraction are definitely there, and we know it, but it isn't ALL that the book is about. That's not all that Mina and Stephen think about - each other, sex, etc. I mean, when they DO think about things, and when things DO happen... well, then you *know* it's a romance novel. But Cooper keeps the steamy scenes down to a minimum, but they are very steamy. There just aren't as many, in comparison to historical romance novels.

Ahh, I love this book! The historical aspect and the fantasy aspect sold me, but the plot and the romance were so amazing. I cannot get enough of stories that involve dragons! And in a romance novel? Turn up the heat! Pun intended. *winks*

I know, I know, no book is perfect. But I really have nothing to say in this section. I love love love this book! I'll let you know if I think of anything later.

But most likely, I won't. Think of anything, that is.

YES!!! Historical romance + fantasy = AMAZING combination. My favorite for adult novels, by far. A wonderful job, Ms. Cooper! I am so impressed!

5 stars. Very well deserved! I'm so glad I read this one - it was exactly what I needed to read.