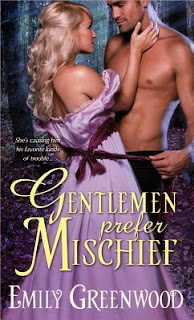 If it hadn’t been for the haunted woods, Lily Teagarden would never have spoken to her neighbor, Viscount Roxham. Known to the fashionable world as Lord Perfect, to Lily he’s a man she can never respect…and the careless rogue who broke her fledgling heart. But sightings of eerie lights among his trees are causing her trouble, and she needs his help.

Intrigued by this prim beauty who was once an ugly duckling, Roxham agrees to investigate, though hardly has he begun when she mysteriously undermines his efforts. The mischief she throws in his path awakens his sleeping heart, just as his touch stirs a passion she can’t accept. But Roxham is the last man to whom Lily would surrender, and it’s going to take everything he’s got to win her love.

What a fun yet bittersweet historical romance novel! I had zero expectations for this book, when I started it, since I didn't really remember the synopsis at the time, and I haven't read the previous book in the series, or any others books by Greenwood. So, I suppose you could say that I was pleasantly surprised by this novel! For the most part, I like the historical romance novels I read. I pick and choose the ones that I want to read, because I have a feeling that the story will be great.

Well, this novel was no exception. I thoroughly enjoyed reading about Hal and Lily. There was something about this couple that was so different from the other historical romance novels that I have read. Maybe because it was not really all about the high society, the ton, and so on. Those aspects were a part of this novel, but they weren't what governed the novel.

Lily is a different type of heroine, and Hal is a different type of rake. Lily has had an infatuation with Hal since she was a young girl. Four years later, at twenty, she is more sensible and hardened to such things. She has taken on so much more and does not care for romance, at that point. She has a shawl business to run, and  a school to fund and open. But she doesn't account for falling in love with Hal and his wicked charms. That wasn't part of the plan - loving someone unpredictable, not grounded, not genuinely pure and good.

This novel is set around Hal and Lily's budding relationship. They dance around each other, they collide mercilessly, they evade each other (well, that's mostly Lily avoiding Hal), and the dance continues. You might think, this would grow tiresome, right? No, not really. Greenwood has a way of setting up each scene that it isn't very repetitive. Each scene seems to reveal something new about Hal or Lily or someone.

I really like Lily. She is sensible and rational. She knows exactly what she wants, and while this makes her rigid, she has a mind of her own, and she doesn't let others govern her. She is fiery, but in a cool, calculating sense, not a spitfire sense.

Hal is playful and wicked, charming and sensitive. He isn't your typical rake - he has a good heart. He cares about his family, his position, Lily's feelings... under all of his naughty layers, he is truly a wonderful man. He is the stability Lily needs - a carefree type of reined-in stability. Lily is exactly what he needs - calm, collected grounding. They are so perfect for each other. Readers definitely get to see this when they interact, because they point out each other's weaknesses, dig deep, and cut right to the heart of what the other is feeling.

All in all, I really enjoyed this story. It is definitely a romance story first (though there is a subplot), and it is a great one. This will probably be one of my go-to historical romance recommendations.

There was one thing that bothered me. This book is about Hal and Lily. So, why did the author randomly start including scenes in the perspective of Eloise (Hal's sister) and Donwell (a suitor of Eloise)? Granted, Lily sort of played matchmaker with those two, pushing them together one time, under the guise of wanting a sketch of a lady and a gentleman, but still. It was so random. Like, all of a sudden, in the middle of the book, quite a few scenes are written in either Eloise's or Donwell's perspective. Weird. Totally unnecessary. I don't see how the firsthand account of Donwell and Eloise's courtship added to Hal and Lily's story.

I would definitely recommend this novel to historical romance lovers! Regular readers should try not to miss this one. You'll fall in love with Hal and Lily!

4 stars. I might just go back and read the first book! I'll definitely be catching other books in this series.