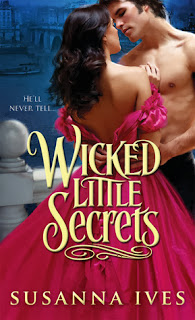 Vivienne Taylor has finally won her family's approval by getting engaged to the wealthy John Vandergrift. Vivienne is determined to uphold Vandergrift's rigid Victorian ideal of womanhood, but when she discovers a vicious blackmail scheme, she turns to her childhood hero, Hadrian, Viscount Dashiell.

Soon the two become pawns in a wicked game of art theft and revenge, forcing them to face their fears and acknowledge their most secret and precious dream—a life together.

Ahhh, so many things! I just finished this one, and I'm having a hard time focusing on what I liked, specifically. I mean, I very well can't say, I LOVED EVERYTHING JUST GO READ THIS ONE PLEASE! That wouldn't be very helpful, would it?

But anyway. I needed a good historical romance read. I've definitely been reading more than I had been at the beginning of the semester, but the books I've been reading haven't been AMAZING, or life-changing, or Earth-shattering. I'm not saying this one was, either, but I really needed a book like this, at this time. I didn't realize that until I finished it.

Vivienne's family is in dire need of money - and what better way to rectify that than to marry a rich, respected man? So, Vivienne miraculously gets engaged to John. Everything is looking up. Right? Well, yes, until Dashiell waltzes back into her life, moving back into the house next door, with his grandfather. Things get weird after that. Someone is blackmailing Vivienne's aunt, something is wrong with John, and inappropriate paintings seem to have more meaning than they should...

One of things I loved about this book was its complexity. It's not just a love story - in the first part of the book, it's barely that! This book doesn't just go into the depth of the attraction between Dashiell and Vivienne, throw a few situations at them, and then they're married. No. There is an actual plot that has nothing to do with the romance of the novel.

I'm talking about the blackmail, of course. The blackmail mystery is what really brings Vivienne and Dashiell together, despite them being in love with each other previously. Both of them know their duties - Vivienne's is to John, and Dashiell's is to stay away from the engaged Vivienne. But with the blackmail plot, the romance is intertwined. Brilliant!

So, this novel wasn't just romantic - it was very intelligent and complicated! And not in terms of romance. The romance is so sweet and subtle. I mean, we *know* about the chemistry between Dashiell and Vivienne, but that isn't what consumes the pages.

I know, you die-hard historical romance fans are probably thinking, so it's not much of a romance novel? Don't think that! It totally is! But it's not solely about the romance. The romance is a subplot, and is significant, but it's not EVERYTHING. The two plots connect at the end, and it's a nice ending.

I love love love Dashiell. Like, he is an awesome historical romance hero. He's not overbearing or uber masculine or whatever, but at the same time, you KNOW he's an alpha male. I do love alpha males, but only when they're not extremely controlling or aggressive, etc.

Vivienne is very fiery, and very intelligent. I like that she isn't the typical 19th-century female, who only cares about her appearance and whatnot. She has more depth to her. Occasionally, she does act that way, which makes sense, but annoys me a tiny bit. Ish.

Anyway. The romance is amazing, the plot is so cool, and the ending is superb. I really liked this novel! I almost wasn't going to read it, but I saw the word "blackmail" in the summary and I was like, heyyy, something different! Glad I took the chance.

As much as I like Vivienne, she is sooooo stupid sometimes. Like, she walks into a brothel on more than one occasion, and comes out feeling like a fool. Well, OBVIOUSLY you'll walk out feeling stupid! What were you trying to accomplish in the first place?! Like, she doesn't always think things through. It bothers me. I mean, way to live up to the stereotype that the fairer sex doesn't have as high brain capability/functioning as men. Sometimes, Vivienne is incredibly intelligent. Other times, she is SO DUMB.

4 stars. What a fun book! Exciting, complex, yet hilarious and enjoyable!