Review: A Little Too Much by Lisa Desrochers 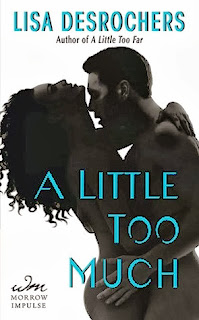 A Little Too Much by Lisa Desrochers
Book Two of the A Little Too Far series
Publisher: William Morrow
Publication Date: November 12, 2013
Rating: 3 stars
Source: eARC from Edelweiss

In the follow-up to Lisa Desrochers’ explosive New Adult novel A Little too Far, Alessandro Moretti must face the life he escaped and the girl he loved and left behind.

Twenty-two year old Hilary McIntyre would like nothing more than to forget her past. As a teenager abandoned to the system, she faced some pretty dark times. But now that’s all behind her. Hilary has her life on track, and there’s no way she’ll head back down that road again.

Until Alessandro Moretti—the one person who can make her remember—shows up on her doorstep. He’s even more devastatingly gorgeous than before, and he’s much too close for comfort. Worse, he sees right through the walls she’s built over these last eight years, right into her heart and the secrets she’s guarding.

As Hilary finds herself falling back into love with the man who, as a boy both saved and destroyed her, she must decide. Past or future? Truth or lies?

There were certain things about this novel that I absolutely LOVED. You all know about my constant problems with New Adult contemporary romance novels, right? All the sex, chemistry, bad boys, stupid girls, dumb decisions, and so on? Well, this novel didn't include ALL of those. Yeah, some aspects didn't change, but still. Let me explain.

This novel goes through several stages. First, Alessandro comes to New York, and visits Hilary. It takes a bit to break the ice (and Hilary's shield), but eventually, Hilary and Alessandro start to hang out. Every Thursday, they go exploring a less frequently visited part of New York. It's kind of a neat idea, actually. I so want to do that with Baltimore. I mean, I've lived in Baltimore my entire life, but there are sooo many pockets of undiscovered treasures that I don't know about.

Anyway. The novel progresses, and so does Hilary and Alessandro's relationship. As they grow more comfortable with each other, Hilary starts to get more scared. And crazy. She keeps thinking that Alessandra doesn't care about her, which is totally irrational. That girl has so many demons...

That could be one of things I really like about this book - the depth of EVERYTHING. I mean, Hilary is screwed up - TOTALLY BROKEN - but not in the typical New Adult contemporary romance way. She seems more real than 99% of the New Adult contemporary romance heroines I have read about. I don't like Hilary very much, but she seems real. The same goes for Alessandro. Yes, he is smokin' hot, but he's also a broken person, haunted by his ACTUALLY BAD past. He seriously made this book worth reading, just saying.

And there are certain things throughout the book, like motifs, or symbolism, that I really like. The butterflies, the Thursday outings, the priesthood thing, the boxing... you have to read the book to know what I mean, but basically, it makes the story seem more three-dimensional.

The romance is sweet, fiery, twisting, suffocating, blinding... it's a lot of things. I don't think Hilary deserves Alessandro AT ALL, and I think that Alessandro deserves better, but the heart knows what the heart wants. With that, I will tell you that the ending wraps up very, very nicely. Almost too nicely.

Ughh, there are so many little things that I didn't like. I wish I could have liked this book as much as I liked the first book. I so wanted to love this book, honestly. But some little things bothered me.

For example, Hilary's decision-making skills? Crap. I would use a stronger word than that, but when I go to post my review on Amazon, it won't let me because it's a curse word. Oops? Anyway. She's so bad at making responsible decisions. Exhibit A: she didn't go to college. Why? She didn't feel like it. That's a piss-poor excuse, in my opinion.

Exhibit B: she's with Brett, the douchebag. CLEARLY, he is using her. They only have sex, their relationship is purely physical, and yet, he lives with her. Are you kidding me?! You don't even like the guy, but you have sex with him all the time, and he lives with you. Hilary is only doing it for connections. Doesn't that make her no better than a prostitute? And the kicker - he doesn't even do a good job of getting her opportunities to act and sing. What an a**hole. But Hilary - what an idiot.

Exhibit C: the deal with Alessandro and Henri. No specifics here, I promise. But SERIOUSLY?! It was Alessandro's right to know, and Hilary took that away from him. She shouldn't have had the right to leave everything in the hands of Mallory and Jeff. YES, that was a good idea, but not for the right reasons.

Exhibit D: when crap (again, I want to use a stronger word, but can't) gets hard, Hilary just yells and screams and pulls into herself and pushes everything away. I HATE when people do that - in real life, or in books. She just hides (like a coward) behind a wall of aggression. She pushes away Alessandro, the sweetest guy in the world, when she finally spills The Big Secret.

Exhibit E: she doesn't attempt to get Alessandro back. He has to be the one to make the effort to come back, and not the other way around, EVEN THOUGH she is the one at fault. Does that make sense? She NEVER *really* apologizes to him about all of those things! I mean, she says the words, but HE is the one who really means what he says. And then they have sex. Yay. That makes everything better.

Exhibit F: she works at a bar, even though she doesn't want to do so. Has she ever heard of human potential? The humanistic approach of psychology? Striving to achieve the most in life, to become better? Probably not. I mean, I get it. Life in the group home was hard. That's no excuse for her crap decision-making skills. Or lack of, I should say.

If you read and enjoyed the first one, then you'll most likely enjoy this one. If you're new to the series, definitely read the first one. That book was AWESOME. This one, in my opinion, wasn't as good. The heroine was the big problem, for me.

2.5 stars -> rounded up to 3 stars. Not as good as the first novel, but not terrible either.