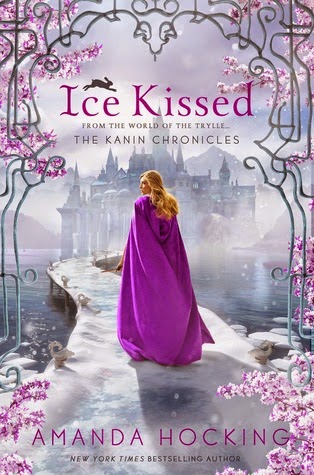 Three-star reviews are so difficult to write. It's hard for me to articulate what went wrong, but at the same time, what worked, and how that balance had me feeling like this book deserved three stars, as opposed to two stars or four stars. I feel like there wasn't a ton of specific things that I didn't like in this book, but at the same time, there weren't a lot of things that stood out to me as amazing.

In this book, Bryn and Ridley come back from Skojare with no answers, and no queen Linnea. Prince Kennet sends them back to Doldastam. But the queen contacts Bryn, and Bryn and Ridley find her. Bryn and a member of the Hogdragen, Kasper, go back to Storvatten with the queen. There is something eerie about Storvatten, and something that dangerous is plaguing the city. Bryn wants to complete her mission and serve her kingdom as a Hogdragen, but she's slowly realizing that she has no idea what she wants, or who she can trust.

This book is a bit slow, in my opinion, and there are so many questions that still have yet to be answered. I was planning on reading the third book no matter what, so I hope the answers to my questions are in Crystal Kingdom. This book focuses on finding Queen Linnea, and once found, protecting her in Storvatten. Not the most interesting plot, and it did little to further the overall conflict of the series, in my opinion. I mean, sure, the ending is really explosive. But it took the whole book to work up to that ending! Which didn't really work for me.

So I thought the plot was a bit boring. One thing that did really work for me was the romance. No love triangle, as far as I can tell. Something huge shifts in Ridley and Bryn's relationship, and it's really crucial. We get to see a little bit more in terms of how much they mean to each other, and how far they would go to protect each other, as well as how far they would go with each other. I think Hocking won't throw a love triangle in the series at this point, which is a relief.

I like Bryn. She spends the whole book trying to redeem herself, after Konstantin Black and Viktor Dalig escaped while she was bleeding in a dungeon (at the end of Frostfire). She works hard to prove to everyone that she deserves to be a part of the Hogdragon, sworn to the royal family. But as this book goes on, Bryn realizes that maybe she doesn't want to serve and protect the kingdom. Maybe she isn't cut out morally for some of the decisions she will have to make. Bryn's inner conflict is a very well-developed part of this book, and I like that.

We really get a feel for the Skojare, and Storvatten. Bryn's mother's tribe is just as icy cold as we would expect them to be. Prince Kennet is flirtatious, but the King is like stone, even with his queen reunited with him. Storvatten is creepy, to be honest, but in a good way, I think.

I really like the ending. It isn't what I expected, the last thirty pages or so. It crept on me and I didn't see it coming. I mentioned that I didn't necessarily like this structure, but I like the ending itself. It's a slight cliffhanger ending for sure, but not heartbreaking or eyebrow-raising. It definitely sets the tone for Crystal Kingdom though. Which I will be reading in the future!

I have so many unanswered questions! I knew that, in Frostfire, not all the questions that I had throughout the book would be answered. And that's fine, because that was the first book in the series. But very few questions were answered in this book too! For example - we get almost no more information on Konstantin Black! What's his deal? Who is he working for? Why does he keep calling Bryn "white rabbit" like he knows her? And Viktor Dalig - what's his role in everything? I don't understand the "villains".

I also don't understand how anything in this particular book relates to the changeling issue. In Frostfire, it seemed like Konstantin Black took issue with the changeling system, and wanted to eliminate it. But no mention of anything changeling-related appeared in this book.

Basically, I'm finding that the overall series plot is very lacking. Konstantin Black's name is constantly being thrown around, but he isn't even in this book, and his role is still not made clear. Same wit Viktor Dalig. There is no progress in anything related to the changelings.

And of course, there is the fact that I keep forgetting that these creatures aren't human - they're TROLLS. It's so easy to forget this because there is little distinguishing between humans and the trolls. It was more of a big deal in the Trylle trilogy. But in this series, it's easy to forget that Bryn and the others are trolls. They seem human, but with different tribes. Like humans. Hocking really should do a better job of distinguishing troll characteristics in this book. Like, physical appearance, or plop in some Kanin abilities or something.

I also had this overall feeling of boredom and meh, which was sad. I really liked Frostfire! But this book seemed like a filler of a sort. I feel like you could take about 75% of the content in this book out, and divide the remaining 25% of the book between Frostfire and Crystal Kingdom, and just have a duology. I hate it when sequel/second novels are disappointing like that!

Mostly, I think I just expected more, and this book/Hocking came up short. But hopefully Crystal Kingdom will prove to be a stunning conclusion!

I'd recommend this one if you enjoyed Frostfire and want to continue with this series. If you haven't read Frostfire, hold off. Frostfire was really great, but I can see this series tunneling really quickly. I'm hoping it doesn't, like the Trylle trilogy. I really liked Switched/Torn/Ascend. Overall, the Trylle trilogy and Kanin Chronicles are great, but this book is my least favorite of the five.

3 stars. Not the best book by Hocking, but not terrible enough to make me not want to read the third book. I just hope Crystal Kingdom doesn't disappoint! I remain optimistic.