Review: Heat of the Moment by Lauren Barnholdt 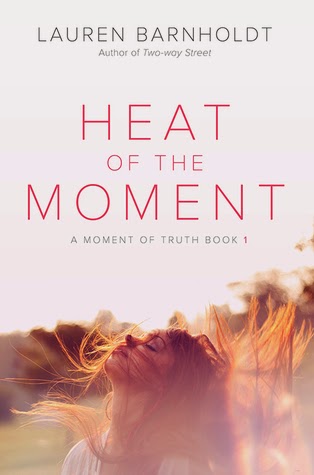 Heat of the Moment by Lauren Barnholdt
Book One of the Moment of Truth series
Publisher: HarperTeen
Publication Date: May 12, 2015
Rating: 3 stars
Source: eARC from Edelweiss

Before graduation, I promise to...learn to trust. In the first book in the Moment of Truth series, Lyla discovers that trusting her head might be easy but trusting her heart is a whole other matter.

Each book in this paperback original series is told from the perspective of a different girl—Lyla, Aven, and Quinn—former best friends who wrote emails to their future selves back in freshman year about one thing they hope to accomplish before they graduate. When the emails get delivered on the first morning of their senior trip all three girls will spend the next three days trying to keep the promises they made to themselves four years ago. While each book follow’s one girl’s life-changing adventure, you have to read them all to get the whole story, including why they’re no longer friends and whether they can get their friendship back on track.

Lyla McAfee had all but forgotten the email that she wrote to herself freshman year and scheduled to be delivered right before graduation—the one promising that she’d learn to trust by the end of senior year. But when she receives it the first morning of her senior trip to Florida her life is sent into a tailspin. Soon she’s questioning her seemingly perfect relationship with her boyfriend, Derrick; her attraction to the school player, Beckett; and whether ending her friendship with Aven and Quinn, her former BFFs, was one of the biggest mistakes of her life.

The first book in a captivating summer trilogy, Heat of the Moment flawlessly balances romance and humor as Lyla embarks on her totally reluctant but completely irresistible journey of self-discovery. And readers will have a chance to discover whole truth about the fight that ended Lyla, Quinn, and Aven’s friendship in the next two installments of the series, coming out later the same summer!

Well, this book was interesting. Super light, fluffy, not deep or heavy or heartbreaking or draining. These days, when it comes to contemporary, I can't seem to handle the heavy stuff (given my own personal life), so I prefer the cute, light reads. This was definitely one of them. Though I definitely took issue with some aspects of the book, overall, I enjoyed the book and am likely to read the other companion novels in the series.

Lyla and her boyfriend Derrick are a perfect couple; she cares about him, he cares about her, they look good together, they get along well. The senior trip to Florida is a golden opportunity for Lyla and Derrick to (finally) have sex. Except that things aren't so perfect between Derrick and Lyla. After many encounters with Beckett, the boy who could have any girl he wants, Lyla starts to realize that her relationship with her boyfriend isn't quite what she wants. Meanwhile, she's forced to room with her two former best friends, which is uncomfortable at first. But perhaps the girls need to hash out things. In any case, senior trip isn't going according to any of Lyla's plans.

I can't decide if I liked Lyla or not. In some ways, she and I are very similar. She's totally neurotic and has a touch of OCD. She has everything planned, with backup plans and contingency plans and built-in cushions. Her mom is relaxed and blissfully ignorant, which is how Lyla misses the bus to the airport for senior trip. And gets a ride with Beckett, a boy she knows only by reputation. Sparks fly from the very first meeting, but Lyla is completely clueless and hopelessly devoted to her boyfriend Derrick. The boyfriend who didn't answer his phone when she needed him, didn't wonder if she was stranded or not, didn't give much thought to his OCD girlfriend who wasn't on the bus.

From the start, you can kind of tell that Lyla lives in a fairy tale world, and that her relationship with Derrick isn't all that perfect. It's not obvious or clear, but it seems like Derrick doesn't pay her much attention, yet she is super into the relationship. Only when she tells him that she wants to finally have sex with him (after like, two years, I believe) does he really sit up and take notice. But Lyla begins to develop feelings for Beckett, so it's kind of weird situation.

I liked the story, though I found it a bit short. I read this book really quickly, which could be seen as a good thing (hence why the comment is in this section). There could have been more to the story though, more development of Lyla and Beckett's relationship.

I liked Beckett, but he seemed a bit one-dimensional to me. He's hot, he's arrogant, he's got a sweet side, all the girls love him, but despite all of that, my felt one-dimensional. There was not much distinguishing him from your average bad-boy hero. But I liked his archetype and role in the story.

I was pretty happy with the romance. It was clear from the start that Derrick and Lyla were together, but they weren't in love, or in lust. Also, Derrick had his own situation going on, so Lyla and Derrick's relationship wasn't as solid as Lyla wants us to think, in the beginning. Lyla and Beckett are pretty explosive together, as she's constantly irritated or yelling at him. The banter is pretty funny.

Overall, I liked the book, even if I didn't love it. I'm more curious about the other girls' stories!

There is an important friendship aspect to this book. Lyla used to be friends with Quinn and Aven, until they broke her trust years ago, and now none of them are friends with each other. The friendship aspect is what ties this series together, but I was feeling kind of meh about it. Perhaps I'll like it more in the next books. The books are parallels of each, written in each girl's perspective.

I was also kind of weird about the romance - don't get me wrong, I really like Lyla and Derrick together. And really, there is no love triangle. However, Lyla does fall for Beckett... while she's still with Derrick. And some activity happens. It's just weird. I mean, if you kiss a guy who isn't your boyfriend, that's cheating, right? I feel like Lyla is so ditsy and clueless, and she doesn't come clean about anything immediately. She tries to cover things up and make excuses and blame things on Beckett, when really, what she needed to do was realize the state of her relationship with Derrick, break up with him, and take time for herself or get with Beckett. No big deal. The secrecy and subterfuge and sneaky business is so ridiculous, honestly.

This isn't the best contemporary novel in the world, but if you already have it (via review copy or preorder or whatever), then give it a shot. If you had no intentions of reading it and/or don't have a copy, then don't. Skip, move on, read something else. I really didn't like Barnholdt's The Thing About the Truth, but I LOVED Through To You.

3 stars. This one was okay! I think I'll read the next books, if only to get perspective on the other girls, and find out what happens with everyone. I'm especially curious about Aven, because the romance in her story sounds like something I would like!