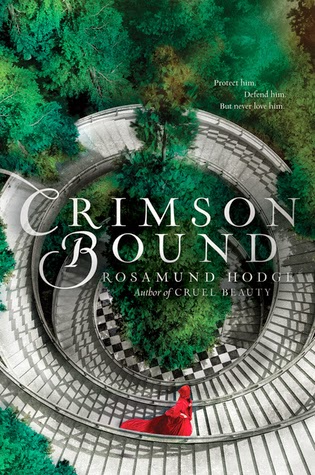 When Rachelle was fifteen, she was good—apprenticed to her aunt and in training to protect her village from dark magic. But she was also reckless— straying from the forest path in search of a way to free her world from the threat of eternal darkness. After an illicit meeting goes dreadfully wrong, Rachelle is forced to make a terrible choice that binds her to the very evil she had hoped to defeat.

Three years later, Rachelle has given her life to serving the realm, fighting deadly creatures in an effort to atone. When the king orders her to guard his son Armand—the man she hates most—Rachelle forces Armand to help her find the legendary sword that might save their world. As the two become unexpected allies, they uncover far-reaching conspiracies, hidden magic, and a love that may be their undoing. In a palace built on unbelievable wealth and dangerous secrets, can Rachelle discover the truth and stop the fall of endless night?

Despite the rating, I actually really liked this book overall. It should have gotten at least four stars, but there some key elements to this book that I just couldn't stand. Some of them could have been easy fixes. Overall, I love Hodge's writing style, her storytelling, how she recreates a fairy tale. This book was dark and romantic, sometimes chilling and very bloody, and a very engaging read.

Rachelle is bloodbound, meaning she is bound to the Forest, after been chosen by a Forestborn, and forced to murder someone. All bloodbound are murderers, and feared by humans. Bloodbound aren't quite human anymore - they have accelerated speed, healing, and other abilities. Most bloodbound hunt woodspawn and other creatures. Rachelle helps protect humans. But she blanches at the task of guarding Armand, a bastard prince who is known to be a saint. Supposedly, he's the only marked person that isn't a bloodbound or forestborn, or dead. But perhaps he is the key to helping her find a mysterious sword that will destroy the Devourer and save the world from endless knight.

Right from the start, Rachelle is proven to be a kickbutt, tough-as-nails, vicious character. She's not merciless, but she isn't afraid to run someone through with a sword. She's wicked smart, calculating, a bit impulsive, irritable, and she's very good at her job. People fear her, for what she is, and her skill. She and her friend Erec are two very powerful bloodbound.

Things start to get interesting when Rachelle is tasked with guarding Armand. The king is weakening and will need to name an heir, of his various make relatives. Armand wants a certain half-brother to have the throne, and will do anything for this half-brother. Armand is sweet, and not a warrior like Rachelle or Erec, but he is intelligent and shrewd nonetheless. He has no hands, as the forestborn that marked him cut them off.

The book is long, but I never felt terribly bored. The story starts cruelly and keeps going, never letting up its bloody and dark pace. There are plenty of twists and turns, some unforeseen, some cliche. There is plenty of action, plenty of mystery, plenty of lore and fairy tale. I love the fantasy world that Hodge has created. Her world-building is masterful, as is her writing. I may not have LOVED this book, but I'm glad I read it, and will keep reading Hodge's books nonetheless. Her books are so strange, and so intriguing. This book features deadly creatures, a forest that seems alive, and lore that is captivating and chilling. Hodge has a very creative and original mind, and I look forward to new ideas by this author.

There IS romance in this book. I'd like to say I enjoyed the romance but... there was a dash of insta-love and a love triangle, and those are two things that I absolutely do NOT enjoy. They didn't make/break the book for me, but both elements definitely made the book less enjoyable (hence, the rating).

Overall, I liked this book. I can (mostly) ignore some things and keep the positive image of this book that I have in my head. It's a great standalone, and I'll definitely be looking out for more of Hodge's books in the future. I liked Cruel Beauty more, but I'm glad I read this one.

I mentioned the bit of insta-love and a love triangle. The insta-love was somewhat minimal, but I personally found it in this book, despite the magnitude of it. If that makes sense. It's not a love-at-first-sight thing, but I thought Rachelle fell for Armand (and vice versa) pretty quickly - especially considering she hated him like five seconds ago.

And there IS a love triangle. That pissed me off more than the insta-love, because the love triangle is more developed and tangible. The insta-love might not be seen as insta-love to other readers. But the love triangle is something no one will miss. We have Erec, the bloodbound best friend, representing the Shadow side. And we have Armand, the marked-but-not-bloodbound-kind-of-mostly-human bastard prince, representing the "light" side. I had a preference, and I like how this book ended, but the love triangle was so unnecessary. It's not the main focus of the book at all, but it was there, and it was annoying. If you're one of those people who don't like it when the heroine gets her hands dirty with both men (so to speak), then you might want to skip this one.

That's another thing - be careful, because this might be a bit spoiler-y. Towards the end of the book, Rachelle learns that one guy does one thing, and it feels like a betrayal. She doesn't know the facts, she doesn't even know if was a real betrayal. But what's the first thing she does? Jumps into bed with the other guy. I kid you not. Literally in seconds, it felt like. Definitely within hours of the "betrayal" happening.

I'm not sure if the author wanted this to seem "empowering" or something - I know we're all about feminism these days, I get it - but doesn't that seem a bit degrading? Beneath yourself, to be in love with one guy and then straight-up have sex with someone else, especially someone you told you would never be with. I'm sorry, but this is inconceivable to me.

And on that vein... this book is filled with cliches. That bit about the sex I mentioned above is ridiculous, and there are stupid, obnoxious cliches in this book too. I distinctly remember thinking, OF COURSE THAT PERSON IS THAT PERSON. Of course he/she was doing that from the start. Of course that was a part of this other person's past. Some things were just so obvious, and it was annoying to be reading and thinking, really, Hodge? You couldn't have taken a different route? I'm not saying this book was super similar to another one, or something. I'm saying there were a lot of painful cliches in this book that could have been avoided.

Despite my dislikes, I enjoyed the book, so I would give a conditional recommendation. Honestly, it's not the best fantasy fairy-tale retelling out there, but it's good, and I liked it. But I hope Hodge stays away from love triangles and obvious plot arcs and silly decisions from now on. It would make her books so much better, in my opinion. This one could have been a rare five-star read! It certainly felt that way, for nearly half the book.

3 stars. A positive rating, and I take away a positive feeling after reading this book. But I can't say I'd go around shouting its praises or bother rereading it. I will be reading Hodge's books in the future though. This one just wasn't amazing in certain aspects. Overall though, it was okay. Good.