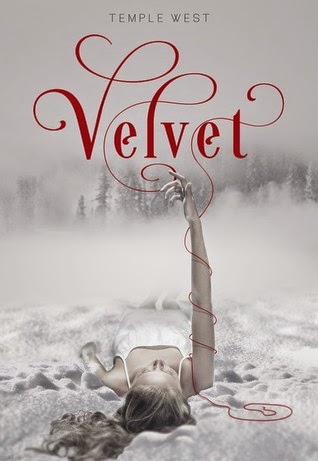 After losing both her parents before age seventeen, aspiring designer Caitlin Holte feels like her whole world has been turned upside down, and that was before the terrifying encounter with a supernatural force. Then, she learns that her hot bad-boy neighbor, Adrian—who might have just saved her life—is actually a half-demon vampire.

Suddenly Caitlin is stuck with a vampire bodyguard who feels that the best way to protect her is to become her pretend boyfriend. Trouble is, Caitlin is starting to fall in love for real, while Adrian can never love a human. Caitlin trusts Adrian to keep her safe from his demon father, but will he be able to protect her heart?

I honestly had no idea what to expect when I received Velvet for review. I remember browsing through Macmillan’s catalog and seeing the book, and something about this book made me pause. I’ve been on an anti-vampire streak for years, probably since about 2009 ish (that’s about six years, woah). So when I saw the word “vampire” in the synopsis, I should have been deterred, right? But I also saw the world “bodyguard”, and I was curious. Ultimately, I gave this book a shot with absolutely no expectations, and I’m glad I did!

Caitlin just moved to Stony Creek, New York, after her mother died a few days ago. Her father has been dead for years. So she’s living with her mother’s sister now, an aunt, uncle, and cousin that she never knew. They never came to visit her mother when her mother was sick. Caitlin is still grieving, and pushes away her family. She has an emotional meltdown in a forest, and something strange happens, involving a boy who saves her. Caitlin begins school in Stony Creek, and becomes friends with Trish. But the boy who saves her also goes to the school. Caitlin doesn't remember what happened to her, but she remembers him – Adrian. Soon, she’s caught up in a life she never thought would exist. She has a vampire bodyguard, trying to keep her safe from a demon who is absolutely nuts. Caitlin never meant to fall in love with Adrian, but somewhere along the line, she did. But is she just a duty to him, someone to protect? And can he keep her safe from a seemingly inevitable and hopeless fate?

When I first started reading the book, I remember thinking, oh my gosh this is going to be a rip-off of Twilight. UGH. There are definitely some elements that parallel. Like a vampire male and human female together in high school. Female recently arrives, catches his attention like no other (and he catches her attention). Suddenly they're seen everywhere, and the aloof Adrian de la Mara and the new girl Caitlin Holte are inseparable. Sometimes he rescues her, and acts really protective.

Despite these similarities, I wouldn't say that this book is a rip-off from that blockbuster series, nor is it fan-fiction or what have you. There is a lot of humor to this book, and there is angst, but legitimate angst (unlike Twilight). Caitlin's mother died just days before this book begins. She's allowed angst for the whole series!

I think I liked Caitlin a lot! She's a bit reserved, very angry, feisty, caring in her own way. She is angry with her aunt and uncle, for never visiting her mother when she was sick. Caitlin finds it hard to forgive them and move on, which is understandable. Caitlin is tougher than she lets on, and deals with finding out Adrian is a vampire, and that a demon is after her, pretty well. What's more, she comes to care for Adrian's broken little brother, Lucian, who was taken by Adrian's father into a demon world when Lucian was really little. Lucian is a little... messed up. But Caitlin is sweet to Lucian from the start, and cares about him.

Adrian was difficult to read in the beginning of the story, but I grew to like him pretty quickly. He's pretty sweet himself, though he does have a caveman streak at times. I constantly wondered, why her, throughout the first part of the story, but when we got the explanation about the demon after Caitlin, everything starts to make sense. Adrian is a nice bad boy, though he's waaaay older (obviously, vampire), forever young, and restricted by tons of vampire rules.

The explanation about the demon being after Caitlin makes sense, and isn't cliche. It isn't because she's gorgeous (she might be, she might not be), or because she has some sort of immunity to vampires/demons (she doesn't). Caitlin isn't anything special. The demon is after her for a purely coincidental reason, and to me, that reason made sense and wasn't too cliche. Basically, the story was well-developed and very interesting!

There is romance, of course. Caitlin is drawn to Adrian, at first because she vaguely remembers that he carried her home (in the first few pages of the book, no spoilers), but then in school, because he's gorgeous and a bit antisocial and has an air of mystery about him. Adrian is given the duty of protecting Caitlin fairly quickly, so we're sure that it's a job for him. Since this book is written in first-person, limited to Caitlin, we never know when Adrian falls for Caitlin. But Caitlin lusts after Adrian, and eventually, falls for him. The lust-turned-love feelings totally worked in this book. I loved seeing the two of them wrestle with their growing feelings - and their attraction to each other. Of course, there are vampire rules, and Adrian is a good vampire. But there is no shortage of chemistry and romance in this book!

The ending of this book is quite dramatic! There are some things that made me cringe, some things that made me sad, and some things that, well, totally heated up this book. The ending has a bit of everything in it - right until the end, when a huge bombshell is dropped. The ending is slightly cliffhanger-y, but involving a secondary character. Meaning, the protagonists aren't part of the cliffhanger. Someone else is! In any case, it's an ending in which you'll want the next book, but it's not an aching, cruel need. It's more like a gimmee-asap-I'll-wait-not-so-patiently need.

Mmm, I can't think of anything at the moment. Perhaps the Twilight parallels were a little too much, in the beginning? I can see why some people got frustrated with the book initially. It does have a Twilight vibe at first. But that kind of disappears as the story goes on. In my opinion.

Coming from the girl that stayed away from vampire books for years on end... yes, I would! I can definitely see why the Swoon Reads imprint of Macmillan picked up this series - it's humorous yet dark, cute yet sexy, lighthearted yet heart-stopping. This one is definitely worth the read, if only to get your swoon on!

4 stars. I'm glad I gave this one a chance, on a whim. I had no expectations and had read no reviews nor seen any feedback, and I'm really glad that was the case. This one was a fresh read for me, and it really worked! I can't wait to read the sequel.