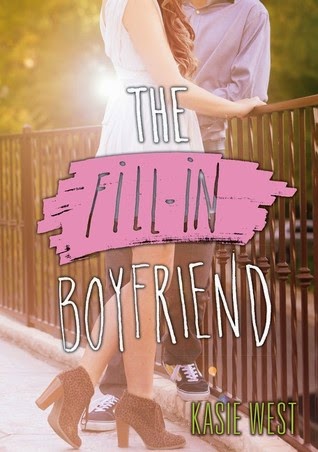 Oh guys. Kasie West does it again. Her contemporary is out of this world, people. This book is so sweet, so enjoyable, and yet, so powerful. Reading the summary, you'd think it's just about Gia and her boyfriend/ex-boyfriend/fill-in boyfriends. But there are other issues at hand, and in classic Kasie West fashion, this book is filled with heartwarming romance, developed characters, friendships, relationships, and a significant issue in today's society - especially among young people.

Gia's boyfriend breaks up with her right outside senior prom, just before they would enter. Bradley is a junior in college, and Gia's friends don't believe he really exists. So when Bradley breaks up with her, she's devastated... but mostly because now she doesn't have a boyfriend to show off. She grabs a random guy who dropped off his sister at prom, and together, they pose as a couple, and then break up at prom. But Gia finds that she misses her fill-in boyfriend, after the prom fiasco. But everyone thinks he's Bradley, and the real Bradley regrets breaking up with her. Gia has a mess that she didn't expect in her perfect, ordered life, and she doesn't know what she wants anymore.

Believe it or not, Gia is the archetype of a Mean Girl, a Plastic. She's the queen bee, head of her pack, student council president, most popular girl in her class - how about school. One of her friends, Jules, is a total Regina George (I'll keep going with the Mean Girls references!), a terrible person, in my opinion. That girl is truly the mean one, but Gia goes along with what Jules does, because Jules will take away the rest of their friends from Gia, and Gia doesn't want that. There can't be two queen bees, that sort of thing.

All that being said, as I was reading this book, I didn't think I would like Gia! She's shallow, conceited, not necessarily cruel, but clueless. She's a lot like a lot of girls I know... glued to her phone, constantly checking how many likes, retweets, comments, etc. her social media posts are getting. She's not malicious, but she isn't nice to everyone. And so when her fill-in boyfriend's sister (who goes to Gia's school) sees them at prom, the sister (Bec) puts her foot down. Gia never acknowledged Bec's existence before, and Gia's friends were mean to Nate (Bec's friend), so Bec doesn't want Gia anywhere near Hayden (the fill-in boyfriend). Understandable!

But Gia undergoes a lot of character development in this book. Being broken up with (instead of doing the breaking up) changed her. Gia FEELS shallow, and her relationships with her friends strains after prom. Gia finds herself hanging more around Bec, who doesn't even like her. Gia's brother comes home from college and doesn't spend time with her. Gia is sad about the whole situation, but she grows up a lot.

Gia and Hayden see each other much more throughout the book. As it turns out, Hayden has an ex-girlfriend that he wants back. Bec manipulates the situation and has Hayden take Gia to his ex-girlfriend's graduation party. And then Hayden and Gia hang out again and again, including going to a play or going to his house or throwing baseballs at old cars. The more time Gia spends with Hayden, the more she realizes how much she likes him... which is hard for her. Hard for him as well, because he doesn't trust anyone, after his ex-girlfriend and his best friend went behind his back.

I like Hayden a lot. He is sweet, loyal, and a tiny bit protective. He agreed to be Gia's fill-in boyfriend, and played the role beautifully. I think he's a college student, taking classes for acting. I'm not a hundred percent sure on that though. Hayden isn't overly macho or manly, but he is right amount of masculine and sensitive and dreamy.

The romance is so sweet! I wouldn't say that there is a ton of steam and chemistry sizzling all over the place, but Gia and Hayden certainly hit it off, right from the start. More importantly, they fall for each other slowly but surely. It takes some time for each to trust each other, for various reasons. I mean, they ARE using each other to fill roles to make exes jealous. I like the romance a lot. Kasie West sure knows how to build a romance without nasty things like insta-love, insta-lust, love triangles, etc. NO love triangle, guys! I know it might seem like there should be one, especially given the summary, but I promise you, no love triangle!

There is so much more to this book than just the romance. Gia's relationships with her friends are significant - Gia and her friend Claire are to be roommates at UCLA (where Bradley, and Gia's brother, attend college). Gia and Jules, on the other hand, don't get along at all. The friendships take hit after hit, and the girls break apart and band together, like a cycle. Gia becomes closer with Bec, who seems less shallow than Gia's current friends. There is also Gia's relationship with her parents (weird relationship), and with her brother. Family and friends are just as important as Gia's relationship with Hayden!

There is also a universal theme in this book that I think is pretty crucial, especially in today's society. Gia is mocked by someone important to her for her obsessive use of social media. She is very angry and upset and heartbroken by the person's words against her, but she knows that everything was true. This is such a problem today - the social media, the need for attention, and validation. I'm so glad Kasie West incorporated this theme in the book. It was a really big part of the story, so I was happy to see it.

Overall, I am so happy with this book! I don't know if I have a favorite Kasie West book because I've loved all five of her published ones to date!

I don't think I had too many dislikes... perhaps I wanted a little more physical romance, but I'm starting to see that that isn't really West's style. Which is totally fine, because the stories don't NEED that, but I wouldn't mind a more physical side to the relationships. Anyway, that's it.

I would absolutely recommend this book. Contemporary fan or no (remember, I'm not the biggest contemporary fan), you should give this one a shot. It's light but not overly fluffy, and there are a lot of significant themes about love, relationships, family, and social media. Totally worth the read. I wonder if there will be companion novels... I could see Bec and Nate getting their own book! Perhaps Spencer too. Spencer would make an interesting antihero.

4.5 stars -> rounded down to 4 stars (no reason in particular, just how I feel). I think Kasie West is an amazing contemporary writer! Her paranormal books were good, but her contemporary novels are out-of-this-world awesome. More, please and thank you!