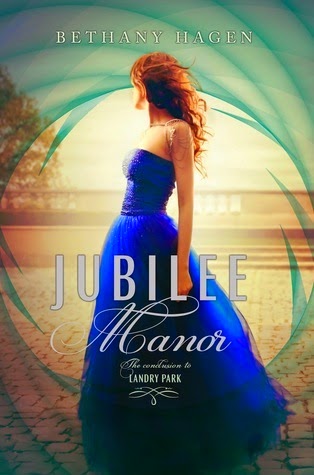 The thrilling conclusion to Landry Park is full of love, betrayal, and murder--perfect for fans of Divergent, The Selection, and Pride and Prejudice

In Landry Park, Madeline turned her back on her elite family, friends, and estate to help the Rootless. Now, in Jubilee Manor, she struggles to bring the Gentry and the Rootless together. But when Gentry heirs—Madeline’s old friends—are murdered, even she begins to think a Rootless is behind it, putting her at odds with the boy she loves and the very people she is trying to lead. If she can’t figure out who is killing her friends and bring them to justice, a violent war will erupt and even more will die—and Madeline’s name, her estate, and all the bonds she’s forged won’t make any difference.

This conclusion to Landry Park, which VOYA dubbed "Gone with the Wind meets The Hunger Games,” is a richly satisfying, addictive read.

Read my review of Landry Park!

Apparently this series is only a duology! Which makes me extra excited to read this book! Landry Park was quite good, though I'll have to do a reread before this one!
Posted by Alyssa at 12:00 AM