Review: The Wondrous and the Wicked by Page Morgan 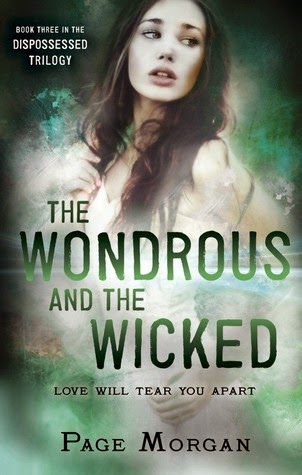 ***SPOILER FREE REVIEW (perhaps spoilers for books 1 and 2, but not this book)***

For fans of Lauren Kate's Fallen series comes the exciting conclusion to the trilogy that includes The Beautiful and the Cursed and The Lovely and the Lost. The Waverly sisters must save themselves before all is lost.

Since the Waverlys arrived in Paris, the streets have grown more fearsome by the day. As Ingrid learns to master her lectrux gift, she must watch Axia's power grow strong enough to extend beyond her Underneath hive. By all indications, the fallen angel's Harvest is near-and the timing couldn't be worse.

Targeted by vengeful gargoyles, Gabby has been exiled to London for her own protection. Meanwhile, the gargoyle castes are in disarray, divided between those who want Luc to lead them and those who resent him and his fondness for humans. The Alliance is crumbling from the inside as well, its members turning against one another, and possibly against the Waverlys, too.

Axia has promised that the world will burn. And now, unable to trust the Alliance, separated from Luc, Gabby, and her twin, Grayson, Ingrid is left to face the demon uprising alone.

Finally. FINALLY, I have this book in my heads. I feel like the wait for this book has been especially slow and painful. I binge-read The Beautiful and the Cursed and The Lovely and the Lost in April 2014, one right after the other. So it's been about a year, which isn't really that bad of a wait, but I needed this book so much. By the way - I don't agree with the comparison in the synopsis (Fallen series by Lauren Kate). This series is nothing like the Fallen series! It's much better, for starters. Anyway.

In this final novel, Ingrid, Gabby, Grayson, Luc, Marco, Vander, Nolan, must make their stand against Axis and her Duster minions. Each one of them have a significant role to play, and if they want to defeat Axis once and for all. Gabby has been banished to London, for her own good, while Ingrid and the others remain in Paris. The Dispossessed are divided between two gargoyles, one of which will claim the position of elder. The Alliance is divided, with traitors and betrayal filling the ranks. The demons have multiplied, Axia's power and hold have increased - the Waverlys are left to their own devices, to stop Axia from destroying the world.

One thing I have to mention - I didn't quite remember a lot of specifics (and even general information) from the first two novels. NOT A PROBLEM. Page Morgan does an excellent job of catching up readers as the story of this book goes - without info-dumping readers. You won't feel lost, and you won't feel like you need to reread everything. Though it wouldn't hurt.

This series is definitely one of my favorite series. Gothic historical fiction with a healthy dose of paranormal elements and beautiful romance... definitely my type of read. I absolutely love how well Morgan creates this world in historic Paris, how well she builds her world in this historic time period, but does not let the time period restrict her story. I didn't find anachronisms in this historical fiction series, though I didn't go hunting for them, probably because the paranormal aspect of this series was in balance with the historical side. As always, the world-building was concrete and well-written. I love this Gothic vision of Paris that Morgan has constructed.

The characters. There are so many of them, and yet, it is a joy to read about all of them. This book is written in third person omniscient, so we never get any one person's first-person perspective. The points-of-view don't necessarily alternate, but scenes are told from Ingrid, Gabby, Grayson, or Luc's perspective (third person). I LOVED this. Like in The Beautiful and the Cursed and The Lovely and the Lost, this use of third person with several perspectives really works. I usually don't like so many narrators, but I couldn't see this story without them.

Ingrid and Gabby continue to prove themselves, to prove how strong and resilient they are, in their own ways. I feel like Ingrid has grown even more bold throughout this book, putting herself in situations deliberately, trying to find answers for herself, instead of letting someone else do it for her. I love this growth in character. Gabby also continues to develop - her backbone and spirit really shows in this book. She doesn't like to be pushed around, and it's definitely an important quality to have, especially in this book. Gabby wears this trait well, and I was glad to see her become more of a matured young lady, versus the immature little sister.

Grayson is a character that I came to like a lot more in this book. I can't remember how I felt about him in previous books, but I really liked him in this book. Same with Marco - he was probably one of my favorite characters. He's so fierce and cold, but he's also gruff and loyal and intelligent. I haven't read his novella, but I think I will. Chelle also makes an appearance in this book - she's the hunter that Grayson falls in love with. Vander, Nolan, Nory, and other male characters are very important to this book as well - though I don't have much to say about them.

My favorite character is still Luc. I loved having the opportunity to read scenes from his point-of-view (remember, in third person). He has lost so much, struggled so much, fought with himself so much... I felt like after every scene I read, I liked him even more. He has a lot of page time in this book, so fret not!

I haven't said much about the story on purpose. I don't want to risk spoiling anything. The grand climax of this series centers around defeating Axia - if the Waverlys, the Dispossessed, the Alliance, etc. can work together and figure out how to do just that. The Dispossessed have their own conflicts - a new elder must be elected, and several bloodthirsty gargoyles have stepped up and have begun amassing castes of gargoyles. The Alliance is not as stable as it used to be - Alliance members begin to choose their own allegiance. And the Waverlys - well, they are fighting for each other, as well as their loved ones, and Paris.

The romance worried me a lot, especially in The Lovely and the Lost. Nevertheless, the romance is something that is resolved in this book (among many other things), and I think readers will be pleased with the direction that Morgan took. I was, and I'm very picky about romance.

The ending was wonderful! Very explosive, but things wrap up organically. There is one part of the end, at the very last pages, that totally shocked me. In a good way! I didn't expect that at all, and I love Morgan for doing that thing in particular. Everything comes together - Ingrid's abilities, the rest of the Dusters, the Harvest... Overall, I am so in love with this series. I don't think I have a favorite of the three - I love all of them! I gave all three of them four stars - and they are hard-earned four-star-ratings!

This one started off very slowly. I think it took me about one hundred pages for me to really get sucked into the story and forget about how many pages I'd read and how many I had left. The beginning of the book didn't seem as interesting or life-threatening or anything, but perhaps it was setting the scene for greater action later in the book.

There are four characters whose perspectives are given, to tell this story. I liked Luc's the most, then Ingrid's, then Gabby's, then Grayson's. Gabby is in London, removed from all the action. Her scenes, especially in the beginning of the book, were boring. Grayson's story didn't hold my interest very much either. But the story would not be the same without Gabby or Grayon's perspectives.

Yes. Yes yes yes. If you've only read The Beautiful and the Cursed, keeping reading the series and don't stop until you've finished this book. If you've read book one and The Lovely and the Lost, then you better read this one! This book doesn't disappoint at all, and the ending is a fair one that readers will look upon fondly. Seriously, this series is one of my favorites of all time. Don't miss it!


4 stars. Gorgeous covers, wonderful writing, lush setting, beautiful story, heartwarming romance... there are so many amazing parts and pieces to this series, and an excellent conclusion is a jewel in the crown! I'm so glad I decided to read this series, on a whim. I'll definitely be looking out for more of Page Morgan's books in the future!