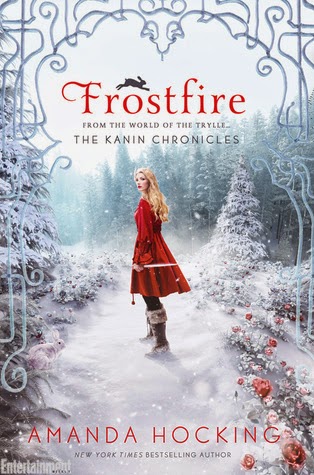 First - can we talk about how BEAUTIFUL the covers are, for the entire series?! If you haven't seen the second or third book's covers, definitely check them out on Goodreads. The cover of this book really embodies Bryn - as well as the Kanin world. Same with the other two covers!

Bryn is half Skojare, half Kanin - and she has always been an outcast in the Kanin tribe, because of her differences (both physical and otherwise). She's blonde (whereas Kanin are brunettes), ice pale (whereas Kanin have tanned skin), and has no troll abilities (where Kanin have persuasion and other supernatural abilities). But her differences make her work even harder, to be a successful tracker, and eventually, a member of an elite Guard of the King.

But when a mission goes wrong and a traitor who hurt her father reappears, Bryn will have to make some decisions. She has a feeling that Konstantin (the traitor) isn't simply a traitor, and that there is something larger at play. But even Bryn's friend and boss, Ridley, doesn't believe her. Bryn has to discover the truth, or the wrong person could be punished.

I really liked this extension of the troll world that Hocking created, starting with the Trylle trilogy! If you haven't had the chance to read those books yet, definitely try and read them before reading the Kanin Chronicles. It's not necessary, but I think it would help. I literally binge-read the Trylle trilogy weeks ago, for the purpose of being able to read this book with no trouble/more background.

Bryn is a really likable character, in my opinion. She's a little air-headed at times, just like Wendy, but I liked her more than I liked Wendy. Bryn has a different drive, motive, MO, whatever. She has worked so hard for what she has and what she wants. She's not royalty, she's a hybrid, and she's also a couple years older than Wendy was in the Trylle series. In context though, I think this series occurs years after the Trylle trilogy - it mentions Finn being like, twenty-four.

In this book, Bryn is a tracker, bringing in changelings. She wants to do much more than that, but she wants to be a faithful servant to the crown. When Konstantin Black shows up while she is tracking a changeling, everything changes. Konstantin and some guy named Bent seem to be after changelings, and the Kanin will not let this happen. Ridley, Bryn, and other Kanin begin to track down changelings at an alarming rate.

Ridley is Bryn's boss - about five years older than her, retired tracker, now a Rektor (in charge of the trackers). Bryn never really noticed her attraction to him... but there is a lot of chemistry between them. He has a girlfriend (awkward), but that doesn't seem to do anything to the attraction between them. He wants Bryn and Bryn wants him. But the relationship is strictly forbidden (tracker and Rektor), and Bryn doesn't want to attach herself to anyone. Or does she?

It's entirely possible that, like the Trylle series, a love triangle could pop into this series. I could see Hocking working some sort of romance angle between Bryn and Konstantin. I wish she wouldn't, because I'm not the biggest fan of Konstantin (yet?), and I like Ridley.

The thing is, we don't get to know much about Konstantin, or his motives, or what's going on, really. We don't get to know why he attacked Bryn's father, years ago. We don't know why he and Bent are trying to take changelings. But it's bigger than two people betraying the tribe. Personally, I think Konstantin is trying to change the way things are done (not everyone likes the changeling system), but that's my conspiracy theory).

Does this book end well? Not exactly. Hocking has a way with ending books with plenty of unanswered questions, a cliffhanger in the plot, the romance. I think this really works in this series - especially since we won't have to wait a year or more for the next book - the sequel will be published in May.

So, with that, I leave you with - I can't wait to read the next book!

Like I said above, I'm hoping that Hocking steers clear of the love triangle realm. I totally ship Bryn and Ridley. Although... in the Trylle trilogy, Loki wasn't even fully introduced into the series until book two. So, we might not even meet Bryn's chosen one until book two. Scary thought...

Personally, I really liked this book! I liked the Trylle series as well, and I'm enjoying the spinoff series so far. The Kanin world seems so much colder and darker than the Trylle world - in the best of ways! I'm excited about book two.

4 stars. Fans of Amanda Hocking will love this new book (and series), I'm sure of it! And hey, trolls, that's interesting, right?! I'm intrigued!

USA RESIDENTS: enter to win a copy of Frostfire on Goodreads!
Posted by Alyssa at 12:00 AM