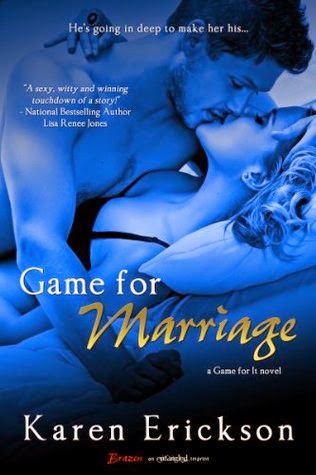 Game for Marriage by Karen Erickson
Book One of the Game For It series
Publisher: Brazen
Publication Date: January 11, 2013
Rating: 4 stars
Source: Copy from Amazon

He’s going in deep to make her his…

Struggling artist Sheridan Harper never imagined she’d spend a sizzling night with Jared Quinn, the smoking-hot star quarterback of her local professional football team, the San Jose Hawks. And she’s even more shocked when Jared’s publicist offers her a proposition: a fake marriage to keep Jared out of the gossip mags. Being that close to Jared would be too tempting, so to protect her heart, she insists on secretly including a clause forbidding sex between them.

Jared just wants to keep his starting QB job and keep it in San Jose. His reputation as a ladies’ man has landed him in the headlines one too many times, but there’s something about his kind, passionate new wife that tempts him beyond reason. Any sort of intimacy between them is completely forbidden, but as their bodies fall in deep, will their hearts follow suit?

YAY for more Brazen novels! I was planning on reading a different book for today's review, but I was in the mood for a super steamy romance novel. Brazen books rarely let me down. I liked Erickson's Game for Trouble, which is book two of this series. It was interesting how I read the second book - Willow's story - before this one. I was like, I recognize the names Willow and Nick... so some of the characters were already familiar. I liked this book even more than I liked Game for Trouble!

Jared's reputation is slowly deteriorating, thanks to several ill-timed photos and false rumors. As a  star NFL quarterback, he has talent, but the new owner of the team wants him to clean up his act. When he meets Sheridan at a fair, the team's publicist dreams up a perfect solution to Jared's problems. Sheridan and Jared could get married, live as a married couple for a while, and Jared's reputation would be secured - and Sheridan would have plenty of money to bail her business out of the red. A perfect, tantalizing, steamy arrangement...

This book starts off sizzling and picks up steam (all puns intended hehe). Jared and Sheridan meet, and the chemistry sparks between them immediately. They can't keep their hands off each other, and one things leads to another, and the same night, they've gotten seriously intimate. The next day, Jared's publicist (and Jared) paid Sheridan a visit at her studio, and make her the offer. Jared feels so bad, but somehow, Sheridan agrees. They get married, she moves into his giant home, and that's that. Oh, but wait, there's a catch - Sheridan asked her lawyer to sneak in a no-sex clause for the duration of the marriage, and Jared has to agree. But the two of them have really hot chemistry, so you and I both know that line is going to be toed. And possibly some.

I love the banter and tension between Jared and Sheridan. The no-sex clause doesn't stop Jared from teasing Sheridan, and doesn't stop Sheridan from wanting to take back the clause. The foreplay is alive and sizzling throughout the book, until things happen. Because you know they will. Erickson definitely knows how to build a steamy romance, and keep the romance alive after the characters come alive and come together.

I liked Sheridan a lot. I feel like I could identify with her - she's quiet and a bit shy and sometimes lost in her head. But she's not a naive dreamer - she has ambitions and dreams, and works hard for what she has. But she's also bold when pushed, and Jared definitely pushes her.

I liked Jared a lot too. He's a very dedicated football player. I really like that passion towards anything, but it really comes out in a man and his sport. Apparently that's totally my type (driven athlete), but hey, they're usually in FANTASTIC shape. Exhibit A (Jared)! But he's more than a hot body and pretty face - he's sweet and caring and diligent.

The story is lovely to read, even though I'm not usually a fan of the stories built on deception (a fake marriage). I like how Erickson constructs Jared and Sheridan's story, showing readers the characters, their passions, their relationship. Erickson handles the climax and ending very well, in my opinion. It's not extravagant or too cliche, in my opinion, and even involves the sports plot. I'm quite pleased with this romance novel!

I have no immediate complaints! It's a four-star read for me, but there was nothing that really stuck out to me that I didn't like.

To all romance lovers that want a steamy romance, smart and witty character, and the ever-important HEA, definitely go for Erickson's novels. This is an excellent start to a great series. I wish I had read this one first, but I like that I read the first two books in the series out of order.

4 stars -> more like 4.5 stars. I might read the third novel in the series - Foley wasn't a favorite character of mine, but he was definitely an interesting one. Plus I love Erickson's romance novels!