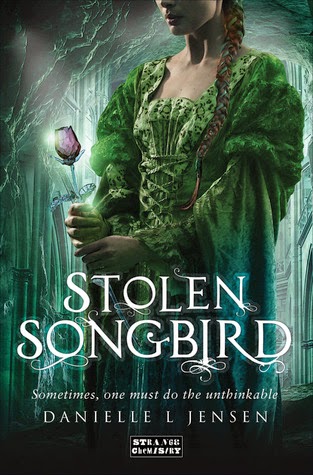 For those who have loved Seraphina and Graceling comes another truly fabulous fantasy...

For five centuries, a witch’s curse has bound the trolls to their city beneath the ruins of Forsaken Mountain. Time enough for their dark and nefarious magic to fade from human memory and into myth. But a prophesy has been spoken of a union with the power to set the trolls free, and when Cécile de Troyes is kidnapped and taken beneath the mountain, she learns there is far more to the myth of the trolls than she could have imagined.

Cécile has only one thing on her mind after she is brought to Trollus: escape. Only the trolls are clever, fast, and inhumanly strong. She will have to bide her time, wait for the perfect opportunity.

But something unexpected happens while she’s waiting – she begins to fall for the enigmatic troll prince to whom she has been bonded and married. She begins to make friends. And she begins to see that she may be the only hope for the half-bloods – part troll, part human creatures who are slaves to the full-blooded trolls. There is a rebellion brewing. And her prince, Tristan, the future king, is its secret leader.

As Cécile becomes involved in the intricate political games of Trollus, she becomes more than a farmer’s daughter. She becomes a princess, the hope of a people, and a witch with magic powerful enough to change Trollus forever.

I think this is my favorite Pili-pushed recommendation so far. For those of you who don't know, Pili (from In Love with Handmade) and I trade recommendations, and once a month, we read/review a recommended book. To read all of my Pili-pushed reviews, see the "Pili-Pushed" tag at the bottom of this post!

Cécile is kidnapped out of nowhere, by someone she wants thought a friend. The "friend" takes her to the secret home of trolls, which Cécile didn't even know existed. There, the trolls are planning her marriage to the crown prince, Tristan, so that Cécile will break a curse placed on the trolls. Cécile is married against her will - but as time goes on, Cécile falls for the prince, and makes friends with other trolls. Soon, she's caught up in the politics and deception. How can she leave when the half-bloods (half-human, half-troll) are suffering under the rule of the full-blooded trolls? How can she turn her back on her husband's secret cause? How can she not try and give so many people hope?

The beginning was a bit busy, in my opinion. The focus is Cécile's voice, her singing, and Cécile trying to fill her mother's shoes. Cécile has just completed a performance, and is really happy. And then a former friend kidnaps her and takes her to a mountain and trades her for her weight in gold. The trolls need a red-haired daughter of the sun to help break the curse. So, Cécile is now married to Tristan, and it's like hate at first sight.

To be honest, I am a HUGE fan of the hate-then-love-at-first-sight thing. It's one of my favorite romance tropes. Cécile hates Tristan because she hates the entire situation - she doesn't want to be forced to marry anyone! Tristan hates Cécile because (according to Cécile) she's human; really, that's not why he despises her. He doesn't like being bonded with anyone, and Cécile is human (i.e., very breakable). If she gets hurt, he feels it. They can feel each other's feelings. It's not Cécile's fault that she seems to feel a lot... which is annoying to Tristan.

Soooo... I loved the romance. Very slow-burn. very hate-to-love, very passionate. In the beginning, Cécile and Tristan really do not like each other. Then, they slowly understand each other better, and only pretend to antagonize each other so that people think they are not getting along. Then it comes to the point where they really care about each other, but there's that facade in the way...

I liked Cécile. She's very rash and impulsive and lives in the moment, making stupid, quick decisions that have heavy costs. However, I LIKE her. She's fiery and determined, strong-willed and protective of herself. She's a strong person and a strong character, and while I can't say I agreed with everything she did, I liked her nonetheless.

I really liked Tristan. We get Cécile AND Tristan's first-person point-of-view, though not necessarily alternating. Tristan is not who he appears to be, throughout the book. But in my opinion, he is a selfless and sweet guy, who has a lot of adult burdens that have a lot of adult consequence. Princely burdens with princely consequences. I liked his rationale better than Cécile's, when it came to making decisions.

At first, I was apprehensive about the story - kidnapping, forced marriage, no thank you?! But the story starts to get really interesting (it was already interesting, but more in a positive way) quickly, and I especially loved watching Tristan and Cécile step around each other. Jensen weaves a complex and intricate story, pulling all the strings together at the end. The world-building is very good; this novel is fantasy, involving trolls and magic and witches and curses. I loved the uniqueness of this story, the characters, the romance.

The end... the end is the only reason why this one isn't getting five stars. I'll get to that in the next section.  Rest assured, I will definitely be reading Hidden Huntress.

I'm actually kind of irritated with the ending, to be honest. It's cliffhanger-esque, and it's brutal, and I wasn't very happy with it. It felt a bit cliche, and I had a feeling it was coming. That doesn't mean I have to like it (and I didn't). But that's okay...

Despite the ending, I would totally recommend this one! Especially to fantasy lovers. This book has been so highly recommended to me, by many, many bloggers. Many bloggers participated in the Top Ten of 2014 event during the last week of 2014, and many bloggers featured this book - multiple times during that week! I know see why.

4 stars. More like 4.5 stars. I really, really enjoyed this book - it was so fun and engrossing to read! It didn't feel like nearly five hundred pages, to be honest!