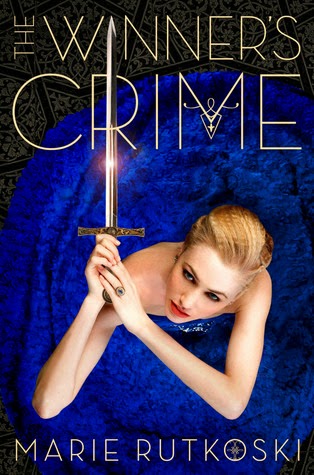 The engagement of Lady Kestrel to Valoria’s crown prince means one celebration after another. But to Kestrel it means living in a cage of her own making. As the wedding approaches, she aches to tell Arin the truth about her engagement…if she could only trust him. Yet can she even trust herself? For—unknown to Arin—Kestrel is becoming a skilled practitioner of deceit: an anonymous spy passing information to Herran, and close to uncovering a shocking secret.

As Arin enlists dangerous allies in the struggle to keep his country’s freedom, he can’t fight the suspicion that Kestrel knows more than she shows. In the end, it might not be a dagger in the dark that cuts him open, but the truth. And when that happens, Kestrel and Arin learn just how much their crimes will cost them.

It has taken me an incredibly long time to write this review. When I initially finished the book, the first thought in my head was, "I am slain." Rutkoski, you are a wonderful and terrible person. This series will probably rip my heart to shreds - and I can't say I'll enjoy the process. This book and The Winner's Curse are AMAZING novels, beautifully written and frighteningly tragic, and I can't stop reading. It's one of those times when you KNOW things are just going to go straight downhill but you can't look away...

Kestrel is preparing to marry the son of the emperor, and there is ball after dinner after celebration. Kestrel plays a dangerous game with the emperor, risking her reputation and life to help the Herrani - not that Arin knows she's helping them. Arin is in the dark about what her motives are for marrying the prince - Kestrel lets Arin believe that she wants to marry him. Meanwhile, Arin is trying to gather support for the Herrani's cause. They may be free, but they will never be quite free from the emperor. With no ally in Kestrel (or so he thinks), Arin turns to other sources for alliances, even if it will kill him.

This book hurt. It hurt to read this one, from beginning to end. So much deception, lies, false betrayal, withholding information, failed explanations, guilt, pain, sadness, resignation, pain pain pain... this is one of those books that make you FEEL, but I wouldn't necessarily say in a good way. The hurting kind of feels, where your heart cracks and your soul splits and life is sad and sadder and really sad.

Kestrel lies to Arin. Arin doesn't understand, but he knows she's lying... until she tells lie after lie and he starts to believe her. This broke my heart. I haaaate deception, especially when it comes to the two protagonists. At one point, I seriously disliked Kestrel; how dare she hurt him so?! But then, the opposite can be said, in The Winner's Curse. It's like Arin and Kestrel enjoy hurting each other - but we know that isn't the case.

I like the growth of their relationship. Arin and Kestrel don't see each other many times in this book, but their thoughts revolve around each other. When either aren't scheming, they think about each other. Even when they ARE scheming, it's usually with the other person in mind. Arin loves Kestrel, but Kestrel wants to hide her feelings for Arin, because it will get him killed by the emperor. Kestrel lies to Arin constantly (when they DO see each other), but WE know why. ARIN doesn't.

A lot of time passes in this book, and a lot happens in the story. We get to know Kestrel better, Arin better, the prince better, even the emperor and the General. The emperor is ruthless and cruel, and doesn't hesitate to use the torture of prisoners to show Kestrel exactly what he is capable of. Kestrel's wedding is very close, by the end of the book - just to give you an idea of the time covered in this book. A lot of characterization, a lot of terrible and sad events, a lot of death.

You know my thoughts on Kestrel and Arin, so that speaks for the romance in this book. The romance is there, but it's not. There aren't many purely romantic scenes in this book, but the few that are presented are beautiful and torturous. I hope Rutkoski makes up for it in the third book.

Just like in The Winner's Curse, the writing in this book is beautiful. I love Rutkoski's writing style. And the world-building is flawless. I love fantasy, and Rutkoski has a great feel for fantasy. Her idea of fantasy is truly epic and lush and majestic and cruel. The politics is an important part of this fantasy world, as there is a ton of scheming and blackmail and subterfuge going on. Love!

Overall, I loved/hated this book. Really, I loved it, but at the same time, my heart hurts so much. The ending was a huuuge cliffhanger, and nothing is resolved (yet?). If anything, it seems like everything is even more muddled and messed up and confusing. I just want things to be sorted out! Perhaps in the third. You better, Rutkoski! As I cry noisily...

I hate cliffhangers. And boy did this one end on one big one. Also, I love/hate this book in general... which isn't necessarily a dislike, but UGH WHY YOU GOTTA BE SO CRUEL, BOOK?! You fellow bookworms understand me (I hope).

Yeeeesss. Read The Winner's Curse, if you haven't already. Read this one too. This is a fabulous example of a well-written, well-structured sequel. It sets the scene for an epic showdown in book three, with seriously high stakes, plenty to be lost. I can't wait! But I can. Except I can't.

4 stars. This one "loses" a star because the cliffhanger is complete torture and I haaate it, but waiting for new books is the best kind of torture, it seems. Meanwhile, I'll be in therapy, if anyone needs me!