Review: I Loved A Rogue by Katharine Ashe 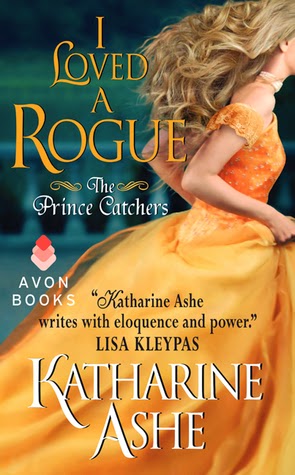 In the third in Katharine Ashe's Prince Catchers series, the eldest of three very different sisters must fulfill a prophecy to discover their birthright. But if Eleanor is destined to marry a prince, why can't she resist the scoundrel who seduced her?

She can pour tea, manage a household, and sew a modest gown. In short, Eleanor Caulfield is the perfect vicar's daughter. Yet there was a time when she'd risked everything for a black-eyed gypsy who left her brokenhearted. Now he stands before her—dark, virile, and ready to escort her on a journey to find the truth about her heritage.

Leaving eleven years ago should have given Taliesin freedom. Instead he's returned to Eleanor, determined to have her all to himself, tempting her with kisses and promising her a passion she's so long denied herself. But if he was infatuated before, he's utterly unprepared for what will happen when Eleanor decides to abandon convention—and truly live.

It is always a wonderful and terrible moment, when you finally have the last book in a series. This particularly historical romance series is one of my favorite - all three of the books were quite good, and did not let me down! I can't decide which is my favorite - I  loved I Married A Duke, I Adored A Lord, and this one, all for different reasons.

In this final novel of the Prince Catchers series, it's up to Eleanor, the oldest Caulfield sister, to find a prince and find the truth about the Caulfied girls' parents. When her foster father (the vicar) marries, Eleanor decides to go on an adventure - to find out what happened to her parents, prince or no prince. But at the insistence of her sisters, she is accompanied by a guest at the wedding, a man from Eleanor's past, the one boy that captured her heart - and then left. Taliesin is a Gypsy, and a former pupil of the vicar. He left Eleanor when they were young for a good reason - but he is back, and he agrees to accompany her on the mission. Together, Taliesin and Eleanor seek the truth about the girls' parents.

Immediately, I knew I would like Taliesin. He's a Gypsy, so he's not all that accepted by the British. He's an educated Gypsy - the vicar took him in for education at a young age. He lived with his uncle though. Taliesin met Eleanor through education with the vicar. He always had a thing for Eleanor, and one day, that thing went places. The next day, Taliesin left - but not because of things with Eleanor. Unfortunately, that's what Eleanor thought. Years later, when he shows up for the vicar's wedding, Eleanor isn't all that happy to see him.

Taliesin is all kinds of complicated and hawt and wonderful and brooding. And not any of the cliche stuff (in my opinion), although that in itself sounds cliche. Just in a physical sense, Taliesin is different, and had to work very hard to create a decent reputation for himself. He is very good with horses, so he buys and sells them for a living.

Eleanor is kind of like that single young maid auntie who wants to stretch her legs and see the world, but has been taking care of Pops the whole time because she's the eldest. Now that the vicar has married, Eleanor is basically free to do as she pleases. So, with Taliesin (much to her chagrin at first), she searches for clues as to what happened on the ship that brought her and her sisters here.

I loved that there was history between the two protagonists - whereas in the previous two novels, the protagonists had never met each other before. Eleanor and Taliesin's reunion is a bit boring (we aren't given the entire past story at once), but we slowly get pieces of what happened between them when they were younger.

The romance is pretty slow and progressive, and at one point, I was worried about the introduction of a new male, and a new female. But there was nothing to worry about, because there would be no love triangle of any sort in this book. I loved the romance - I wanted a little more fire and chemistry, but I definitely enjoyed Taliesin and Eleanor's relationship.

The mystery is indeed solved! Eleanor and Taliesin cobble together the truth about the girls' past - it's actually quite complex. I didn't think things would get so complicated and intricate, but in this book, all is revealed. I'm impressed by Ashe's big reveal - simply amazing!

As for the prophecy - does Eleanor marry a prince? Well, I did say that the mystery is solved... but as for the prince part, I'll leave you to find out for yourself. Same with the mystery, because you will never figure it out, in its entirety, for yourself. I promise ;)

Like I said, perhaps I wanted a little more from the "romance" aspect of the book. The plot (the mystery of the parents and the ship and whatnot) eclipsed the romance for sure - which isn't necessarily a bad thing! I'm just a voracious romance reader and wanted more romance. But that's okay.

Yes! This one! The whole series! Actually, I'd definitely recommend the entire series because of the mystery that threads the books together. You can read each book by itself, without reading the others, but it's worth the time and money to read all three, in order! But you don't have to read them all or in order.

4 stars. A lovely conclusion to a wonderful historical romance series! Definitely one of my favorite series - and I will certainly be reading Ashe's books in the future!