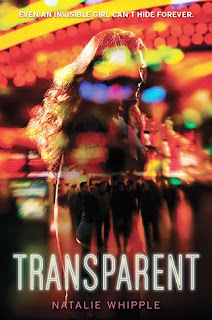 An invisible girl is a priceless weapon. Fiona’s own father has been forcing her to do his dirty work for years—everything from spying on people to stealing cars to breaking into bank vaults.

After sixteen years, Fiona’s had enough. She and her mother flee to a small town, and for the first time in her life, Fiona feels like a normal life is within reach. But Fiona’s father isn't giving up that easily.

Of course, he should know better than anyone: never underestimate an invisible girl.

Oh my gosh guys! I really did not think I would like this book as much as I did! I mean that with no disrespect towards the author or the editors or publisher or anyone, but I when I picked this one up from Edelweiss, I didn't think I would LOVE it. I thought it would be an enjoyable read, but nothing new or awesome that I would really like.

Well, I was WRONG. And I am so happy to be wrong. I loved this book. I think it's a stand-alone, and it might be one of the first stand-alone novels that I've read this year - no sequel or companion. I think that's great - because I am a little tired of trilogies and sequels and more sequels. Companions are still fine by me, but I'm really liking stand-alone novels right now. It's a wonder that I don't read more stand-alone novels.

Anyway. Transparent. What a story. I was confused at first at Fiona and her invisibility - because the author kept coming back to her clothes, and how her clothes are fancy, but all anyone sees is her clothes. Then I realized, people can see Fiona's clothes, but not her. I thought that people couldn't see her at all - no body, no clothes. But it makes sense - and that's why she has to do missions naked. Interesting.

The novel starts with a bang. Readers are introduced to Fiona and her mother via a mission for Fiona's father. We get to see how Fiona's father works, how the missions, work, and just how much Fiona does not want to be doing anything for her father.

So, when Fiona's father threatens Fiona, her mother takes and they run away from Fiona's father. And the story gets awesome and crazy from there. You don't just run from the epic siren-man who lures any person he wants into doing what he wants.

I loved the story's progression. The plot is smooth and bumpy at the same time. The author gives readers enough time to acclimate to the new setting, to new characters and love interests and relationships, and yet, she keeps the action coming. We get normal life scenes, and then we get not-so-normal life scenes. Fun!

Ahhh, the romance. I'm not going to give any names, but let's just say I saw that one coming as soon as we meet Fiona's intended love interest, and I am glad things go... well for them. I wondered how Mrs. Whipple would pull off romance with an invisible girl in the picture (or, NOT in the picture, I suppose), but she did, and for that, I applaud her greatly.

I could go on. I really could. But I won't. You should read this one.

Anyway. This book was so good, and it's definitely a 4-star book for me. And what a wonderful, 4-star-rated book it is!

Yes! Very original, very smooth writing, very interesting plot. I think anyone could read this book and at least like it. It goes by very quickly, and it's not dense and epic and not too emotionally-charged, so you won't be reeling for days. That's a good thing!

4 stars. It just FEELS like a 4-star rating to me, versus a 5-star rating. But I assure you that you will not regret reading this book!