Review: The Ruin of a Rogue by Miranda Neville 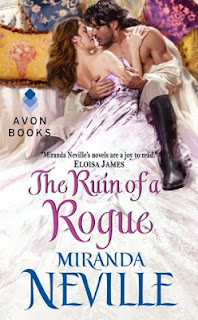 
Charm, wit, and nerves of steel have helped Marcus Lithgow gamble his way across the Continent. But when his heart is at stake, all bets are off for this most perfect rogue...

It's been years since Marcus set foot in England—why toy with the ton when he can fleece wealthy fools in Paris and Rome? Yet everything changes when he inherits a ramshackle estate. Marcus's first and only chance at a respectable life needs funding . . . the kind Anne Brotherton can provide. Such a wallflower should be ripe for the picking. So why does Marcus fell like he's the one hanging by a thread?

Anne Brotherton is sick and tired of being an heiress. She cannot bring herself to marry a fortune hunter. Why can't men like her for her sharp mind and kind hearts rather than her impressive dowry?

She nearly falls for Marcus's smooth seduction. But when Anne realized she's being strung along, a lust for payback empowers her like never before. Two can play the game of deception. The game of love, however, has its own rules.

Ahhh, I really wanted to like this book. You all know my obsession with historical fiction, and more specifically, with historical romance. I got this eARC with two others from Edelweiss, and I chose to read this one first because it sounded awesome! Rogue, heiress, games?! I had high hopes for this one - not that I don't have high hopes for the other two eARCs I got along with this one.

Anyway. I was totally looking forward to an awesome historical romance book. Marcus sounded like a yummy rogue with a plan. And he was - sort of. I liked his plan from the beginning and the way he went right after what he wanted, despite the fact that he had basically no money, and that Anne eventually caught on and drove him up a wall.

I didn't really see the part about his "smooth seduction". I mean, I saw a kind gentleman, eager to please a lady, but not fall over himself trying to make sure she was pleased. I didn't really think Marcus was a rogue at all! He seemed like a poor and desperate man, but he also seemed like a complete gentleman to me! He didn't try to kiss her or do anything sexual AT ALL. Which was very nice of him, and I respected that, but if he's supposed to be a rogue, with rakish behavior, then that doesn't really fit his personality.

The ending is good! Happy ending and all that. There are sacrifices made, but as with most historical romance novels, there is a happy ending for the happy couple.

That concludes what I liked from this novel.

Oh my gosh. I mean no disrespect to the publisher and the author and everyone who worked so hard to make this book what it is, but there are SO MANY THINGS that I just did NOT enjoy. It pains me to say this, because I love Avon Books and historical romance.

Okay. Well. My first thing to point out is that this book is indirectly split up into two parts: the first part deals with Marcus and Anne, in which Marcus was being super nice to Anne in order to "charm her", for her money. The second part of the book deals with Marcus trying to restore an old manor he inherited from his mother's uncle. Anne follows him to his new manor because she has heard that there are ancient Roman ruins in this particular manor summer, and she is interested in archaeology, so naturally, she wants to explore the ruins.

So Anne was a boring and almost a nuisance. She stood up for herself when she realized that Marcus was after her for her money, but she still acted like a spoiled heiress! I expect her to act like a spoiled heiress (she IS one), but she tries to convince herself that she's different than the other aristocratic heiresses. Ugh, no.

And Marcus was in no way the rogue and rake that the premise claims him to be! I really don't think he acted like a rogue at all! He acted like a nice gentleman, even when Anne joined him at his manor, even when he struck up a bargain with her. He didn't demand anything naughty in nature.

And that's another thing. Anne does housework with Marcus. Like, sweeping, dusting, cob-webbing, that sort of thing. MANUAL LABOR. Does anyone else see a problem with this? No heiress/aristocrat/rich lady would EVER stoop that low, just to see ancient Roman ruins. And that in itself is anachronistic - no aristocrat and definitely no LADY would go on her hands and knees to dig up ancient ruins that might not even be there. No one. I so so not believe that.

In the second half of the book, they fall in love while restoring the manor and digging up ancient ruins. I took FOREVER for them to actually decide that they were in love. And there wasn't very much chemistry! I was so disappointed in the lack of chemistry throughout the entire book! Their relationship didn't seem very passionate. It seemed taxed (on Marcus's end), and boring (on Anne's end). Or maybe just all-around boring. I find that sad - because this is a historical romance novel! There is supposed to be some burning passion, or something! All of the "passion" comes at the very end, and it happens only a few times!

Okay, so I feel like some people would say, "Well, maybe this is a historical romance with a lot of intellect and very little sex." Okay, I completely respect that. I love it when books are supposed to be intelligent, and more based on the plot than the romance. BUT, when we're dealing with a historical ROMANCE novel, I think there needs to chemistry throughout the book, among other things.

Did I already mention that I didn't care for the plot? It was so boring. Both parts to the book were unappealing. The characters were somewhat unappealing (mostly Anne). There were some anachronisms that bothered me. I didn't like the lack of passion and chemistry.

I feel like I've said enough. And again, I mean no disrespect towards the people who worked on this book, and the author. But as a historical romance lover, I was not impressed.

No. I'm sorry, but there are much better historical romance novels. Shorter ones, too. Length usually never bothers me, but when I already wanted this one to end from the very beginning, the sheer size of this book made it even worse. I didn't want to stop reading this book, because I thought it would get better, but alas.