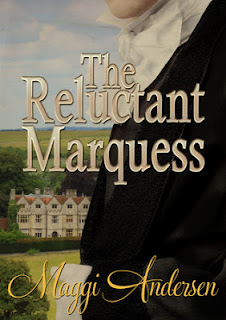 Charity Barlow wished to marry for love. The rakish Lord Robert wishes only to tuck her away in the country once an heir is produced.

A country-bred girl, Charity Barlow suddenly finds herself married to a marquess, an aloof stranger determined to keep his thoughts and feelings to himself. She and Lord Robert have been forced by circumstances to marry, and she feels sure she is not the woman he would have selected given a choice.

The Marquess of St. Malin makes it plain to her that their marriage is merely for the procreation of an heir, and once that is achieved, he intends to continue living the life he enjoyed before he met her.

While he takes up his life in London once more, Charity is left to wander the echoing corridors of St. Malin House, when she isn’t thrown into the midst of the mocking Haute Ton.

Lord Robert is a rake and does not deserve her love, but neither does she wish to live alone.

Might he be suffering from a sad past? Seeking to uncover it, Charity attempts to heal the wound to his heart, only to make things worse between them.

Will he ever love her?

You all know my love for a good historical romance. Almost every historical romance novel that I read, I enjoy on some level. This book took a little more for me to like it. I wasn't completely sucked in by the chemistry, the romance, or the plot. The characters were interesting and likable, and the characterization is done well. I just wish the author could have slowed done and given readers more.

I actually really like Charity. She is our heroine of the story, and she reluctantly agrees to marry Robert, in order to uphold her godfather's wishes. But marriage to the new Marquess of St. Malin isn't all that it seems. Robert is detached, distant, and he doesn't seem to care that she is not used to high society and all of the things that come with being in society - like the social events, the dresses, the gossip.

Charity stands up for herself, despite several social blunders. She didn't give up on Robert, even in the end, when she did something irreversible. She never really obeyed him, especially when it came to his mother. I'm so glad Charity did what she did at that point in the book. No spoilers though!

Robert is... complex. He's actually not, but he's more complex than Charity. He doesn't want to be married to her, but he totes her around to societal occasions and shows her off. He acts like he wouldn't care if she decided to have a man on the side (which she does NOT do, by the way), but we all know he cares, and yet, he has a mistress. He doesn't want Charity anywhere near his mother.

The romance is really slow in this book, as was the chemistry. We don't really feel it until the second half of the book. I'm kind of mad that the romance was so slow. This is a historical romance novel! But, that's okay. It picked up eventually. At the end.

The end is pretty good, if not predictable. There wasn't a significant change from beginning to end, except the obvious change of feelings. So, a happy ending. I wish more could have happened in the end, in terms of the plot, and not just in terms of the characters.

This book is EXTREMELY short. I think the page count for the paperback edition is around 250 pages. That's short! I feel like the author rushed through key parts of the novel, in order to get to the "good stuff", like Charity's interactions with society. The author does not include small but necessary scenes that indicate chemistry between Charity and Robert. And within the larger, more important scenes, there isn't a lot of indication of chemistry either!

So, the romance seemed extremely slow, in a very short book. The pacing isn't bad, but the book should have had more scenes with Robert and Charity sharing cute and intimate moments, despite Robert's frustration with being married, or Charity's dislike of society.

I think the author did a good job of making us believe that Robert and Charity fell in love with each other, by the end of the book. But the physical side of that was definitely lacking.

This book was all-in-all extremely predictable. I feel like I could have mapped this book out from chapter one. Maybe it's because I've read so many historical romance novels, but I really think there could have been more to the plot than just a slow romance.

Hmmm, not really. My three-star-rating is definitely on the negative side of three stars. This isn't the most impressive historical romance novel, and honestly, if the author hadn't sent me an e-copy of this book (over a year ago, I might add, and not necessarily for review), I probably wouldn't have read it. I mean, does the cover scream historical romance? Not really. I would've skipped right over this one.

3 stars - but on the negative side of three stars. I enjoyed this book, but I probably won't read it again.