Don't worry, I'm not going to make you scroll anymore.

Anyway, here it is! 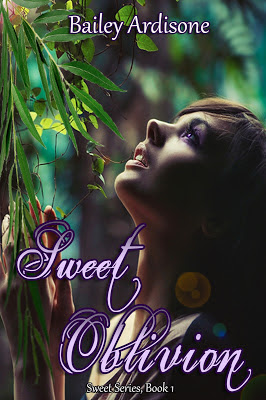 When two worlds collide, nightmares become reality. And some secrets...are best kept in Oblivion.
...Until there is hope.

Have you ever wanted to forget? Nariella Woodlinn has. Many times. Especially when her already frustrating life gets turned upside down by a mysterious boy who randomly shows up in her small town. And she can’t seem to understand anything about him, despite how much she tries.

Nari hates everything about her life, except for her best friend Rydan, but now that they’ve been separated during their senior year of high school, she has to learn to make new friends without him. When strange, unexplainable phenomena start becoming an every day part of her life, Nari struggles to come to grips with reality. And with love.

Naminé has responsibilities. Duties. It is her obligation to fulfill all that is asked of her by their King. But when a glimmer of hope is introduced to her by a prisoner she tends to, it means life or death for her and her people. She does all that she can to turn that hope into reality, and finally end the vicious war that has been ensuing since she was born. Even if that means keeping it secret from her King. Even if it means carrying out the biggest betrayal against the King ever seen during her time.

She has hope. She will fulfill her duty. She will not let her people down.

I suddenly felt anxious, excited even, at the prospect of laying eyes on Mycah again. On being enveloped in his woodsy scent. The way my soul felt complete and whole again only his presence alone could accomplish. ...Were we really just friends?

And then there he was.

As I took the last stair, his eyes found mine from the "Greeting Room" he quietly sat in, drinking from an antique teacup.

He watched me carefully as he slowly put the cup to his alluring lips and took a sip. My heart danced wildly in my chest with every step I took, drawing closer and closer.

I waved at him, not able to speak just yet.

“Morning, beautiful,” he whispered. His English accent made the words sound musical. Or maybe it was his silky voice that did it. Or it could have been the combination of the two, I really didn’t know. Either way, my stomach did a flip.

And then I thought, it must have been the way he was looking at me, not even trying to hide the desire that flooded his aqua eyes as soon as they locked onto mine.

The sun played with his eyes, bringing out the unique colors and making them more vivid. Even though he was lit up by the streaming sun that shone brightly through the large bay window, he never looked more dangerous.

And he never looked more sexy.

Well, that could be debatable.

I mean, if you wanted to count the time he was dripping wet and practically naked, well then, one really couldn’t say.

But this moment was definitely a top contender for first place.

He stood up, keeping perfect posture and foreign demeanor exquisitely intact, and came over to me.

“You alright?” he asked, lips pulling up in a side smile. I nodded, half hating the spell he always put me under, half totally loving it.

He reached out and slowly slid his hand into mine, intertwining our fingers together and pulling me toward the front door. He chuckled and slightly shook his head at the ground. 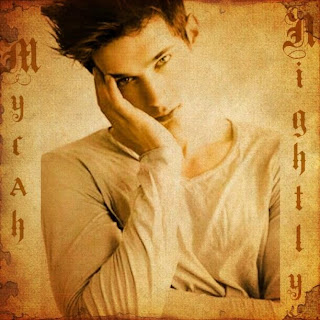 Grab your copy everywhere ebooks are sold! Also available in paperback through Amazon.


And now....for the second book in the Sweet Series, we present: Sweet Escape! 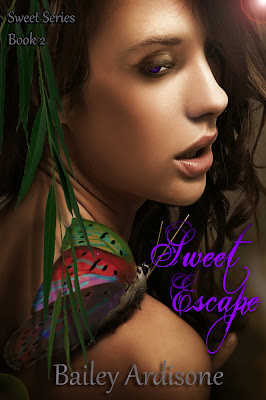 She once thought her biggest problems were ones brought on by the mysterious man she had refused to fall in love with...Mycah. But she quickly discovers none of that compares to what she is about to encounter next.

This time, it isn't because of who Mycah is.

This time, it's because of who she is.

Naminé risked everything to save her people. Her goal was to bring their only hope back to their Kingdom. As the war rages on, Naminé gets thrown right into the lion's den - the false King's chambers. Forced to do his bidding, can she prevent the downfall of the only hope she worked so hard to bring home?

I laid mesmerized from the position on my back, staring up at the cloudless sky. It was as blue as a Robin’s egg. If not more blue. The sun shown extremely bright, but the rays did not scorch my skin. The air was comfortable. Very comfortable. It was the perfect temperature. Warm, without being too warm, and no humidity.

I did not move.

I was afraid to move in case this was all just a dream and any slight stir would make it vanish, throwing me back into tormented reality. It must be a dream, right? Clearly, I had busted my head against the tree trunk and knocked myself out...And I was only imagining this while Zaylie, I was sure, was worried and trying to wake me up.

I could feel the grass beneath me. Soft, lush, exquisite. As if I laid against the perfect bed made just for me. I was Goldilocks and it was just right.


A colorful bird soared above me. But as it descended closer, obscuring my view of the sky, I realized it was not actually a bird at all. It was the strangest butterfly I had ever seen. Its wings were a rainbow of colors - and it was huge. Bird-like huge.


But I didn’t feel frightened or grossed out like I usually did by insects. This was different. It felt different here. The butterfly flapped its wings so gently and effortlessly. I numbly reached up while it landed weightlessly on my fingers.

The moment it touched me and started cleaning its antennae, even though I could barely feel it on me, I got the striking feeling that this was real. Very real. I quickly sat up, causing the vivid butterfly to take flight again and gazed around the beauteous expanse encircling me.


In celebration of the new cover and the up-coming release of Sweet Escape, FOR A LIMITED TIME ONLY: Sweet Oblivion is now on SALE! Get started on The Sweet Series by reading the first book, Sweet Oblivion, now only 99¢! 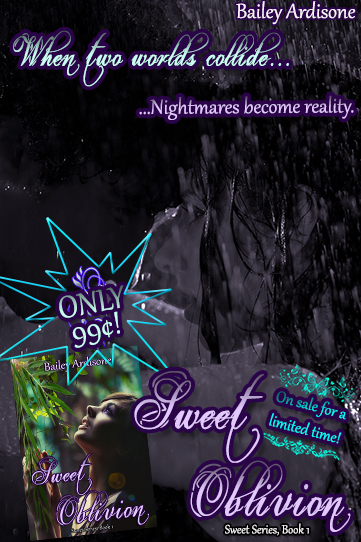 Bailey Ardisone is a collaboration between two sisters who were born and raised outside of Chicago, Illinois. They combined their creative forces to write the first book in their series, called Sweet Oblivion. Though the name Bailey Ardisone applies to both of them, for the sake of answering questions they will each take on one of the names to make things easier. 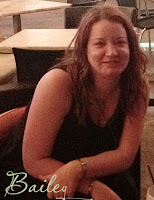 The older sister of the two in Bailey Ardisone, has always loved getting lost in books, movies, music, and art. Fantasy is her favorite genre. She gets her love of words from their grandmother who together used to write poems, short stories and even greeting cards. Her biggest goal would be to travel and explore the world. She loves going to the beach, enjoys football sundays, and spending time with friends and family. 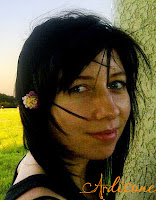 The younger sister of the two in Bailey Ardisone, has always held a strong love for anything art related. Whether it be drawing, music, or constantly day-dreaming, her mind never stops imagining wonderful stories and possibilities. She finally got to put some of those ideas to use with her new found love of writing novels. Some other things she is forever obsessed with are Japanese Anime and Manga, animals, traveling, her home city of Chicago and anything in miniature form. One thing she can never get enough of is sleeping/taking naps and sour skittles.