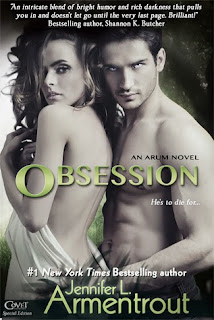 Serena Cross didn’t believe her best friend when she claimed to have seen the son of a powerful senator turn into something... unnatural. Who would? But then she witnesses her friend’s murder at the hands of what can only be an alien, thrusting her into a world that will kill to protect their secret.

Hunter stirs Serena’s temper and her lust despite their differences. Soon he’s doing the unthinkable—breaking the rules he’s lived by, going against the government to keep Serena safe. But are the aliens and the government the biggest threats to Serena’s life… or is it Hunter?

I really, really liked this book! I had a feeling I would, because the Arum have always had a mysterious quality to them. Hunter is just... YUM. I'd say that I like the book a lot BECAUSE of Hunter, but I also like the book because of its plot and its relation to the Lux series, and the romance (swoon!).

But let's talk about Hunter. He is so different from what I expected. Okay. I expected arrogant and domineering, like the synopsis says. But JLA made him... come alive. She made the book in Serena and Hunter's points-of-view, so it was easy to relate to both characters, but especially Hunter.

Hunter is lethal. We are constantly reminded of this, page after page. He isn't the kind of lethal that appears every now and then to remind readers of how "dangerous" he is. Hunter is the REAL lethal, the kind that could blow at any minute and kill everything. He isn't gentle or tender or any of those sweet things. He is brutal and rude and oh-so-BOSSY.

I enjoyed reading about Hunter. I enjoyed his story very much. Although, his story was just as much Serena's as it was his. Serena is a great heroine. I actually liked her more than I thought I would, but I still had problems with her (see below). She definitely held her own against Hunter, and is so worthy of him.

The plot of this was interesting, despite the fact that the romance was clearly the primary plot. I wanted to know what would happen with the senators and the DOD and Project Eagle. JLA spins us in circles with the dizzying and exhilarating romance, but she always reminds us of the underlying plot at hand.

This book connected to the Lux series, which I liked. There is mention of a certain hot Luxen and his girl towards the end of this book. Another male, um, thing (I have no idea what this guy is!) pops up. He's like a fix-all, or a band-aid! Anyway. I hope Hunter and Serena appear in future Lux books!

Did I already say that I loved the romance? It was dizzying and exhilarating, I think I said. I think Hunter and Serena go really well together. But then, I wouldn't mind a Hunter of my own. Smiley face.

The ending is great! It's a positive ending, but I have a feeling that JLA isn't done with Hunter and Serena. Cameos in the Lux books? I hope so!

There wasn't much that I did not like. I feel like JLA's heroines are all the same - snarky, brave, stupid when it comes to some simple but detrimental decisions (DON'T GO BACK TO COLORADO, IDIOT! But of course, that's what Serena did. OF COURSE). But this did not really bother me because somehow, Serena really complemented Hunter. I liked her sometimes, I hated her at other times. All heroines have their flaws, but I feel like sometimes, Serena is just plain dumb. Not often though.

That's my only complaint :)

I totally would! This book is so engrossing and interesting and HOT. But seriously adult-only. Or for mature readers. Promise me you're not one of JLA's younger fans who wants to read this book. Save it for when you are older! And for you slightly older fans (hey, I'm 17!), have at it! You'll enjoy it.

4 stars. This one is definitely one of my favorites of JLA's books! I hope she continues to write about the Arum, because this book really explored the other side of the aliens in this story.