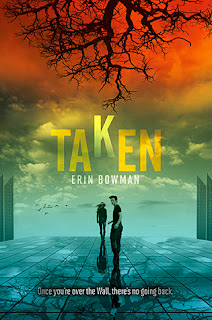 There are no men in Claysoot. There are boys—but every one of them vanishes at midnight on his eighteenth birthday. The ground shakes, the wind howls, a blinding light descends…and he’s gone.

They call it the Heist.

Gray Weathersby’s eighteenth birthday is mere months away, and he’s prepared to meet his fate–until he finds a strange note from his mother and starts to question everything he’s been raised to accept: the Council leaders and their obvious secrets. The Heist itself. And what lies beyond the Wall that surrounds Claysoot–a structure that no one can cross and survive.

Climbing the Wall is suicide, but what comes after the Heist could be worse. Should he sit back and wait to be taken–or risk everything on the hope of the other side?

Taken was easily one of my most anticipated debuts of 2013. I have known about Taken's release before it had a cover or a synopsis, because more than a year ago, I discovered the Friday the Thirteeners blog. I had a feeling that I would really like this book. I had read plenty of dystopian novels, but this one had a unique premise, and eventually, a beautiful cover.

Sadly, I was bitterly disappointed. Maybe my expectations were too high, but this book did not deliver. The beautiful cover was a lure that I fell for, but the synopsis, the premise - I couldn't believe they let me down! I got this book from Edelweiss a month before the release date, but I also pre-ordered this book without reading the book. I don't necessarily regret doing this (hey, I got my book signed last week!), but it's sad when I pre-order a book and don't like it as much as I expected.

As I said before, I loved the premise and cover of this book. I was intrigued by the idea of being a male and being heisted one your eighteenth birthday. I knew that it wouldn't be Gray that would be heisted to set the plot in motion, but a friend of family member.

There IS a love triangle (boo!), but I really like one love interest over the other. It's quite obvious which girl has a brain and which one tends not to use her brain. I hope that Gray sticks to his guts and does NOT give the other love interest a chance. But of course, Gray is "confused", so we as readers won't find out until the end of the series, I suppose.

The plot is interesting, and somewhat engaging, but I found it very predictable (see below). I sort of couldn't wait to finish the book, and not to find out what was going to happen (because I basically knew what would happen), but just so that it would be over. I think the pacing of the plot was pretty good, but again, the plot was predictable.

The plot is a large part of my dislike for this book. Let me start with Claysoot and the mystery of the heists and the wall. Here's the thing: once we start getting into the story, after a major heist of a person very close to Gray, we can see what is going to happen. To me, it was obvious what Gray was going to do. He got a tiny push from his dead mother, and there he went. Predictable.

The next few paragraph MAY have general spoilers. I mention no specific scenes or names, but I do mention general plot devices and twists that I noticed in more than one book.

So, after Gray initiates his journey, he discovers a dystopia-like society, and all of the mysteries of the heists, the wall, Claysoot, the heisted boys... everything is discovered. This happens VERY quickly into the book. After the big mysteries are divulged, my interest dwindled. As soon as we find out what is really going on with the heists, this novel became just like any other dystopian novel. Predictable.

There is a bad guy who thinks he's the good guy. This guy tries to make another guy look bad, when in reality, that second guy is the good guy, and the original guy is the bad guy. Everyone is on the lookout for the "bad guy", who is actually the good guy. Predictable.

So, the plot was predictable. And my interest sort of went out of the window when the big mystery.

I also HATED one of the love interests. I mentioned above that I liked one of them. But the other? From the beginning, I knew that she couldn't be the girl for Gray. For one, she was in love with a previously heisted boy. She didn't really love Gray, in my opinion, despite her thinking that she does. She does something awful and hurtful to Gray (indirectly), and in my opinion, she can just stay where she was. Gray should have left her there, in my opinion.

I'm still confused as to what it was that was killing people who tried to climb the wall, to escape the heist (not a spoiler, I promise!). I know it was touched upon, but no clear explanation was given. Perhaps it is something I can hope for in future books.

So, future books. Will I read them? Yes. That's one of the reasons why I stuck with three stars, instead of two stars. I'm interested enough to read Frozen, and book three. And I love Erin, so I'm more than willing to give the remaining books in this series a chance.

Kind of, but not really. If you are sick of dystopian novels, then don't bother with this one. After about one fifth of the book, it's just like any other dystopian novel out there (the only big difference being that this book is in a male's point-of-view). If you own this book, or have an ARC or eARC of checked it out of the library already, then I would give it a try. Otherwise, I'd say skip it.

3 stars. I really wish I liked this one more, but it didn't meet my high expectations, or even my regular expectations for a book.