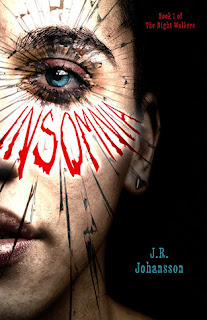 It’s been four years since I slept, and I suspect it is killing me.

Instead of sleeping, Parker Chipp enters the dream of the last person he’s had eye contact with. He spends his nights crushed by other people’s fear and pain, by their disturbing secrets—and Parker can never have dreams of his own. The severe exhaustion is crippling him. If nothing changes, Parker could soon be facing psychosis and even death.

Then he meets Mia. Her dreams, calm and beautifully uncomplicated, allow him blissful rest that is utterly addictive. Parker starts going to bizarre lengths to catch Mia’s eye every day. Everyone at school thinks he’s gone over the edge, even his best friend. And when Mia is threatened by a true stalker, everyone thinks it’s Parker.

Suffering blackouts, Parker begins to wonder if he is turning into someone dangerous. What if the monster stalking Mia is him after all?

I knew I would like this book, but oh my gosh! I loved it so much! I do not usually read these types of books, that are horror-like and creepy. But this book was not overly creepy. If I could handle it, anyone will be able to!

I loved that this book is written completely in a male's first-person point-of-view. We only read Parker's thoughts, which is very different and very fresh, considering the amount of novels in a female'a first-person point-of-view. Parker was fun to follow, and he wasn't crazy and arrogant and cocky like most YA males seem to be. Parker is a calm, rational young adult (most of the time), and he is not ridiculously impulsive. I really like him!

The plot of this novel is quite fun to follow. And creepy. And fun. I was never bored while I was reading, and I didn't see some of the plot twists and turns. I usually have a good radar for crazy twists, but Ms. Johansson had me guessing throughout the novel/

The supernatural/paranormal aspect of the book is fantastic. I don't think I've read many books with dream-watching powers, except sort of Pretty Dark Nothing, so this concept was pretty new and pretty original to me.  I like the dark twist that Ms. Johansson took with Parker's powers.

I really like the romance in this book. It seems like it's going to be straightforward, based on the synopsis, right? Well... not really. I would not say there is a love triangle, because we know who Parker cares about definitively throughout the book and by the end of the book. But at the same time, there COULD be a love triangle. And if that were to happen, I honestly wouldn't know which way to go with it. On the one hand, I like the girl that I originally would be the primary love interest, and I do NOT like the girl that is the actual love interest. But Parker really likes the girl that IS the primary love interest.

As I stated before, I don't really like the primary love interest. I know that Parker really does, but she rubbed me the wrong way. She's younger than Parker, and that is obvious. She is one of those girls that act like they are better than you, but we all know that she isn't.

By the end of the story, I could tolerate her more, but I still didn't like her.

Otherwise, I was fine with this book!

YES! Don't let the "creepy" cover deter you (is it really that creepy? I didn't think so when I first saw it, or even now). I promise you that this is a debut you do NOT want to miss!

5 stars. It's amazing how many 5-star-rated books I've read recently - usually it's not so many in even a year! But all of them, especially this one, deserve 5 stars from me!