Blog Tour Interview with Polly Holyoke, author of The Neptune Project (and Giveaway!)

Welcome to the blog tour for The Neptune Project by Polly Holyoke! I've got a fabulous interview with this awesome author, and just below that, a giveaway!

Read my review for The Neptune Project HERE. 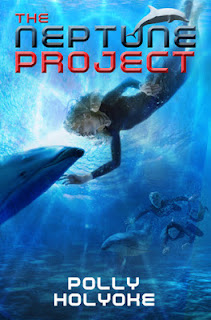 Alyssa: Hi, Polly! Thank you so much for joining today on my blog!

Polly: It’s my pleasure to be here.

Alyssa: So, Polly. Describe your book in ten words. GO!

Polly: Genetically-altered teens fight to survive in the sea.

Polly: I had to delete a scene or two that I liked, but the book is probably stronger without them.

Polly: I definitely like to start my writing day with a cup of English Breakfast tea with just the right amount of milk and sugar. That’s a very British way to enjoy tea, but I got hooked on having it that way when I went to the University of St. Andrews in Scotland my junior year of college.

Alyssa: What type of books do you like to read? What are you currently reading?

Polly: I’m reading a number of YA and MG books by other 2013 debut authors right now. I recently finished Parched by Melanie Crowder. It’s a climate disaster dystopian set in the future, and it is a beautiful, searing read. In general I like to read literary, historicals, science fiction and fantasy.

Alyssa: Where is your favorite place to read?

Polly: Any place which is quiet, which in my busy house is often hard to find! I get much of my reading done in the car waiting to pick up my kids from various events.

Alyssa: What’s your favorite distraction when writing under deadline?

Polly: I go for walks. Whenever I get stuck or stalled, I put my trusty pack of dogs into their harnesses, and off we go for a stroll.

Alyssa: What do you think of the cover of The Neptune Project?

Polly: I love the way my main character Nere is depicted. Her hair and her sea suit are just right, and the cover artist did a wonderful job with the light beneath the waves. The water off the coast of California is more green than blue, and the visibility there is rarely that clear, but a cover showing a bunch of green murky water wouldn’t have appealed to kids’ imaginations the way this beautiful blue one does!

Alyssa: What’s one song that embodies The Neptune Project?

Polly: Well, since I work for Disney now, I often say the lyrics from “Under the Sea,” fit my story nicely. “Darling, it’s better down where it’s wetter, take it from me,” hopefully ends up being true for my characters.  But “Never Let Me Go,” by Florence and the Machine sounds like sea music to me, and the lyrics, “And I’m going under, but I’m not giving up! I’m just giving in…” make me think of a harrowing moment in the story when her mother forces Nere under the surface to make her breathe water into her lungs for the first time.

Alyssa: Are you working on anything related to The Neptune Project? Or something new? Anything contracted?

Polly: I have already written a sequel, and Neptune 2 has been bought by Puffin UK. I’m crossing my fingers and hoping I’ll hear good news soon from Disney Hyperion as well.

Alyssa: And that’s a wrap! Thank you so much for stopping by my blog, Polly!

Polly: Thanks so much. Guess I better dive back into my work, so to speak!

Alyssa: Have fun with that! :)

Polly Holyoke has been imagining stories since she was in fifth grade. When she isn't writing, Polly loves reading, camping, skiing, scuba diving and hiking in the desert (where she quite stupidly got herself bitten by a rattlesnake). She lives with three rescue dogs, two spoiled cats and a nice husband who is tolerant about the piles of books all over their house. Her debut middle grade novel, THE NEPTUNE PROJECT, is the story of a young girl leading a group of genetically altered teens fighting to survive in the sea. She is thrilled that this novel will be published by Disney/Hyperion and Puffin Books UK summer, 2013. She thinks the best part about being an author is going to work in her sweatpants and getting paid for daydreaming!