Review: The Hunter by Monica McCarty 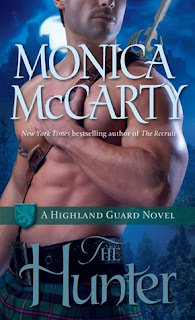 The war for Scotland’s freedom continues as King Robert the Bruce battles on. At his command is an elite army of trained warriors, soldiers dedicated to their king, their country—and to the remarkable women they love.

Prized for his unbeatable tracking skills, Ewen “Hunter” Lamont accepts a dangerous assignment: locate a missing undercover courier. But this is no ordinary target. Ewen has met his prey before as “Sister Genna,” a fiery, forbidden woman forever etched in his memory after one stolen, sinful kiss. Now that he knows her real identity, he’s more determined than ever to keep her safe. But without the protection of the veil between them, fighting the allure of the beautiful lass may be the toughest battle this extraordinary warrior has ever faced.

After her ill-fated attempt three years ago to rescue her twin sister, Janet of Mar has found salvation acting as a royal messenger—until she surrenders to a darkly handsome warrior whose rough, sensual kisses stir feelings the woman in her can’t deny. But when betrayal leads to danger, and a crucial communiqué is put in jeopardy, Janet has no choice but to put her faith in the hunter who can find anything—perhaps even her heart.

I didn't know what to expect from this book, since it isn't the same era of history that I am used to reading, but I loved it! Ewen and Genna really dazzle readers in this book, as they run and chase and fight their way to the King, and to themselves.

That being said, the plot of this book is outstanding. I was never very bored in this book, as there was constant action throughout the book. I was a bit confused in the beginning, with Ewen's history, but I read on, and could see how that history came into play in the novel.

The characters were very, very well-written. I was impressed by how three-dimensional the characters seemed, and how much depth even the secondary characters had. Genna (Janet) is such an awesome heroine - believe me, she is truly an excellent messenger. She got herself out of sticky situations time after time after time. Ewen is incredible as well. It's remarkable to see why he earned his title as "the hunter".

The romance is wonderful! It was not instant and earth-shattering, but the chemistry is pretty sizzling. Genna (Janet) is a fabulous heroine, and Ewen really complements her. Both of them are very clever and intelligent, and they constantly try and outsmart each other. It's adorable and endearing to "watch" the two of them struggle within themselves, to discover what is best for themselves and each other.

I loved the ending of this book! Even when I thought the climax was over, and the falling action had fallen enough, and everything was smooth sailing, it wasn't! Ms. McCarty had readers interested up until the very last word of the very last page - because everything didn't wrap up all at once.

Overall, I loved this book! I wish I could have started at the beginning of the series (this book is book SEVEN), and perhaps I will!

This is really a small thing, but I feel like this book was so long. I usually love long books, but some scenes and descriptions could have been cut down. There's nothing like non-stop action, and then a huge description to kill the buzz.

But it wasn't a big deal. I skipped some of the longer descriptions (like in the very beginning), and I was fine while reading the book!

Totally! If you like medieval fiction, this is definitely one for you!

4 stars. Now let me go back and read the previous six books :D