Book Blitz and Giveaway: Romancing the R.A. by Ashelyn Drake 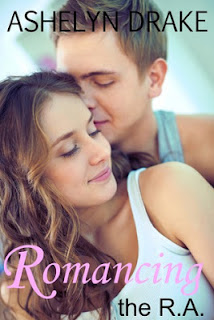 Romancing the R.A. by Ashelyn Drake
Book One of the Campus Romance series
Publisher: S.B. Addison Books
Publication Date: May 28, 2013

Noelle Buckman is looking forward to making a fresh start in college, one that doesn't involve immature high school boys. The second she steps on campus for freshman orientation, she can sense the possibilities. Especially when she spots Andy, a resident advisor who’s not just hot but also thoughtful enough to open doors for a girl.

And Andy has his eye on Noelle. Even when her nerves take control and she thinks she comes off as a hillbilly with no direction, Andy can see what she’s really like and he’s more than a little interested.

But orientation is less than two full days and there’s an entire summer between Noelle and Andy. Will her attempt to romance the R.A. be as short-lived as college orientation?

He’s stunned at first and doesn't move. I start to pull away, thinking I've made a huge mistake, but then I feel Andy’s hand on my lower back, pulling me closer. His lips part, and he deepens the kiss.

Every inch of me is on fire. Andy’s an incredible kisser, but the position we’re in is awkward. I reach my hands up and bury my fingers in his hair, which prompts him to lift me onto his lap. Much better. Our bodies are pressed so close I can feel every inch of him. My lungs are screaming for air, but I’m not willing to give in to them. I've been dying to kiss Andy ever since he first smiled at me, and I’ll be damned if I’m backing away that quickly.

His hands move up my back to my hair, and he pulls my head back gently exposing my neck. His lips trail down my jaw and to the nape of my neck. I bite my lip to stifle a moan, but it manages to slip out anyway. Andy slowly eases off, opening his eyes to see my reaction. I debate pulling his lips back to mine, but for the moment I drape my arms around his shoulders and just stare into his baby blue eyes.

He can say that again. “Yeah.”

“I can honestly say that’s the first time I didn't have to make the first move.”

“And it’s the first time I ever made the first move.”


He smiles. “Then I’m honored.” He leans forward and places a single kiss on my neck. His hips rise under me, and I know exactly where he’s hoping this is going to lead. My body is screaming for his touch, but I don’t want to be that girl. The one who goes off to college and sleeps with the first guy she meets. As much as I want Andy, I can’t do this right now.