Welcome to the book blitz for Aberrant by Ruth Silver! I have the book description, the author's bio, an excerpt, and a giveaway! Stick around for all of that! 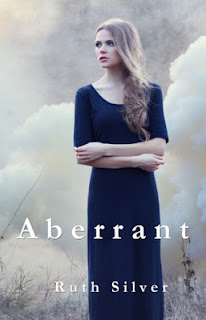 Aberrant by Ruth Silver
Book One of the Aberrant series
Publication Date: April 28, 2013

In the future Dystopian society of Cabal, the government instills equality for all and offers its citizens the perfect system. There is food, shelter and jobs for everyone. The one requirement is to follow the rules without question, including the government's match in marriage and "The Day of the Chosen", a lottery that randomly selects families to conceive children as natural means hasn't existed in generations. Following her eighteenth birthday, Olivia Parker accepts her requirement to marry her childhood best friend, Joshua Warren, and is eager to start her work assignment and new life when it all comes abruptly to an end as she's arrested and thrown in prison. The only crime committed, her existence. Olivia is unlike the rest of the world born not from "The Day of the Chosen." The truth haunts the government and puts her life in grave danger as one simple fact would destroy the perfect system.

With Joshua's help, Olivia breaks free of prison and is forced on the run. Together they set out to find the promised rebel town in search of a new home and new life together. Their situation seems less than promising as they reach the town of Haven. New rules and customs must be adhered to in order to stay. Leaving would mean most certain death in the large expanse of the Gravelands. Time is running out as the government mounts an attack to destroy Olivia and bury her secret with her. Thrown into a world unlike their own, they must quickly adapt to survive. Ruth Silver is the best-selling author of Aberrant. The Young Adult/New Adult Romantic Dystopian Adventure, Aberrant is the first in a trilogy,  released April 17th, 2013. Silver first began writing poetry as a teenager and reading heaps of fan fiction in her free time. She attended Northern Illinois University in 2001 and graduated with a Bachelor’s in Communication. While in college she spent much of her free time writing with friends she met online and penning her first novel, Deuces are Wild, which she self-published in 2004. Her favorite class was Creative Writing senior year where she often handed in assignments longer than the professor required because she loved to write and always wanted to finish her stories. Her love of writing, led her on an adventure in 2007 to Melbourne, Australia. Silver enjoys reading YA/NA  novels and sharing her favorite books with other readers. She also enjoys photography, traveling and of most of all writing.

...I sighed softly and did something I'd only read about in forbidden novels. I leant in, brushing my lips against his. The kiss was soft and chaste. It lasted no more than a mere second before I pulled back.

"What was that, Olive?" He gave me a horrified look and all I could feel was my stomach somersault. I knew romance and love weren't ever spoken of in Genesis. There was no need when the government knew who was perfect for one another, and children were won by lottery and conceived in a lab. Intimate acts were considered unnecessary.

"I read about it in a book," I whispered, afraid I'd done it all wrong. "It was a kiss," I breathed, chewing on my bottom lip nervously. I’d never kissed anyone before and worried he thought it was terrible. I’d never seen two people share a kiss, I didn’t quite know what it was supposed to look like, but I thought I’d done it right after reading about it. My hand reached out, grabbing his arm. "Please don't be mad at me." I breathed. "You have to swear you won't tell anyone!" Joshua hesitated for only an instant before he leaned in, taking another taste from my lips trying again. The second kiss was softer and satisfied both of our curiosities. My heart raced and my skin warmed to his touch. "I thought today was going to turn out so much worse," I confessed. Joshua laughed as he pulled back slightly, staring at me. His eyes had darkened a deeper richer shade of blue. I'd never seen his eyes change colors before. His fingers moved to tickle my stomach with a grin. "Worse? Really? You're not happy you married me? You're just relieved it wasn't someone worse?"

"No!" I shrieked, "That's not what I meant!" I tried to catch my breath, but he hardly gave me a second more than necessary. I pulled from his ticklish grasp, jumped from the couch and ran across the room in a fit of laughter. He quickly followed, jumping over the sofa as he was just inches from me. He was close now, smiling and trailing behind me as I ran toward the bedroom. It was probably the worst place I could go, trapped between Joshua and a mattress. I felt him tackle me down onto the plush bed, his hands skimmed my stomach but he was no longer tickling me. The laughter still hadn't subsided.

"Trying," I gasped between fits of laughter. Lying down helped settle the feeling of my racing heart, and after a moment I shifted along the mattress, reaching out to him. "I want to tell you a story," I insisted as my fingers found his cheek. "One I read in a book." I wanted him to learn the things I had about love and romance. I couldn't help but feel my body stir with a strange fire and warmth as he loomed just above me. Staring up at him I froze on the mattress hearing the latch click on the front door. I knew it had been locked.