Review: This is W.A.R by Lisa Roecker and Laura Roecker 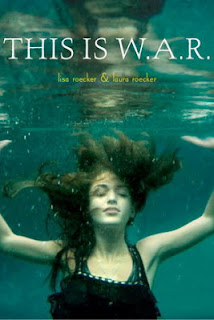 
At Hawthorne Lake Country Club your trust fund can’t buy you happiness, but if it’s big enough, it almost always buys innocence. When Willa Ames-Rowan drowns in Hawthorne Lake everyone who’s anyone knows James Gregory is the one who killed her. But no one will ever say a word. Enter The W.A.R. Four girls, four motives to avenge Willa’s death, and only one rule: Destroy the Gregory brothers at any cost. The girls pool their trust funds and devise a series of elaborate pranks to deliver their own particular brand of vigilante justice. Innocence is lost, battles are won, but it’s the truth about what really happened that night that stands to destroy them all.

This book was... interesting, to say the least. I like the whodunit feel of the book, even though we as readers DO know who commits the crime (or we THINK we do). Everybody thinks that they know who drowned Willa. It's no secret that everyone believe James Gregory did it.

There are many characters in this book, and all of the characters are very different. Rose is the first character introduced. It is clear that she harbors feelings for the one and only James Gregory, but she tries to avoid him, since he is the supposed criminal. She tries to avoid ALL of the Gregory men, especially after the weird scene she saw between her mother and James's grandfather, the Captain.

Madge is the other primary character that learn more about as the book goes on. Really, there are four girls that are given chapters in their points-of-view, but Rose and Madge are the two with the greatest importance. Eventually, Madge goes a little crazy for revenge, and her hatred for James goes overboard. I never really liked Madge, but her character was interesting to follow.

I did, however, like James.I felt bad for him, right from the beginning. To me, it was clear that he was not solely behind killing Willa. I promise you that is NOT a spoiler. I liked him and Rose together, though we don't really see them as a couple together throughout this book.

Overall, this book was interesting, but sort of flat for me. The plot was mildly intriguing, but at the same time, I was just dying to finish the book, so I could move on and read another book.

This book was boring. I was so bored sometimes, and other times, I wanted to shake some of the characters (most of the time, it was Madge). The whole rich-girl scheming crazies was not amusing. I found some of the girls' characters and morals insufferable. The only girl I really liked was Rose. And I liked James, but he's a boy.

The plot structure in general was weird. When present events finally started to pick up, like the W.A.R. schemes actually happening, I was still not impressed.

Not really. This book is probably on the low end of three stars. I was invested enough to finish the book, but overall, I was not impressed.

3 stars. Maybe this rating is too high, but I'm glad I finished this book. I probably won't read it again, or any novels to follow.