Review: The Edge of Falling by Rebecca Serle 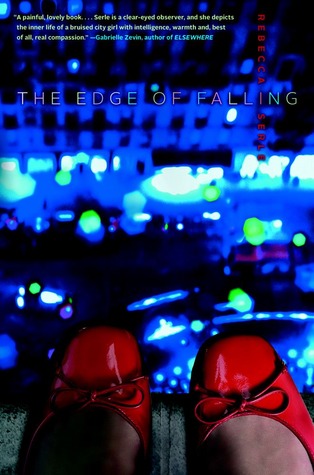 Growing up in privileged, Manhattan social circles, Caggie’s life should be perfect, and it almost was until the day that her younger sister drowned when Caggie was supposed to be watching her. Stricken by grief, Caggie pulls away from her friends and family, only to have everyone misinterpret a crucial moment when she supposedly saves a fellow classmate from suicide. Now she’s famous for something she didn’t do and everyone lauds her as a hero. But inside she still blames herself for the death of her sister and continues to pull away from everything in her life, best friend and perfect boyfriend included. Then Caggie meets Astor, the new boy at school, about whom rumours are swirling and known facts are few. In Astor she finds someone who just might understand her pain, because he has an inner pain of his own. But the more Caggie pulls away from her former life to be with Astor, the more she realises that his pain might be darker, and deeper, than anything she’s ever felt. His pain might be enough to end his life…and Caggie’s as well.

This book was a pretty good read. It definitely was not what I thought it would be. Caggie is dealing with a lot of heavy stuff right now - her sister died, when she (Caggie) was supposed to be watching her, and then Caggie saves a classmate from falling off a balcony, at a peer's party. Except that Caggie isn't a hero - because SHE was the one that went to that balcony, to jump, to kill herself, and Kristen was trying to save her. Not the other way around (though the other way around was what happened).

This book is definitely one of those "tough-issue" books, and we all know my experiences with those. I usually have polar extremes when it comes to those kinds of books - I either love it, or loathe it. My most recent "tough-issue" read (before this one) was Faking Normal by Courtney Stevens, and I was sooo not a fan (which is unfortunate, because the author is so amazing and nice!).

I'm not really sure how I feel about the characters. I sort of understood Caggie, except I don't necessarily agree with her choices, from beginning to end. I was suspicious about Claire, Abigail, Astor, and Peter. The only characters that I actually had genuinely friendly feelings toward were Trevor and Kristen - and that's because they seemed to be the only honest, caring characters of the book.

Astor is an interesting character. I'm not sure I like him very much, but I don't blame him for what happened - not really. Sort of, but not really. Like, some things were definitely his fault, and at times, he was definitely acting crazy, but he needed to experience healing just as much as Caggie did.

All of the characters experience some sort of growth, as the story progresses. The story primarily focused on Caggie's decline in school and her whirlwind relationship with Astor. For the most part, I liked the story. I liked the unconventionality of the romance - I personally saw it coming, but most people probably wouldn't. I enjoyed this book for the most part, and I'm glad I read it.

As I mentioned above, I'm not entirely sure how I feel about Caggie. I don't think we clicked, but I could see her side of things MUCH easier than I could with most heroines of "tough-issue" books. I feel like her emotion shutdown and the way she expressed her grief was more subtle and more complex than other heroines of "tough-issue" books, which I would much rather read. At the same time, Caggie's decisions were probably just as screwed up, at the end of the way. Some of the things she did, especially when it came to Astor, were too much. Like, there were red flags going up in my head throughout the book, in many regards.

Most of the characters rubbed me the wrong way. I'm glad that they all went through their processes of grief, and most of them grew and developed throughout the story, but I didn't like most of them, for the most part. I liked Trevor a lot, and I liked Kristen, but otherwise, meh.

I wasn't very passionate about this book, and I didn't absolutely love it. I know it doesn't seem like I have a ton of reasons for rating this book as low as I did, but I just didn't love it. Nor did I really like it. I enjoyed it, I'm happy to have had the opportunity to read it, but I probably wouldn't buy it, or read it again.

I'd say maybe. This isn't like, a number one, absolutely loved, must have, must buy/borrow, will cry over, will change lives kind of book. It's a good read, but don't break your neck trying to get to the bookstore or library for this one. It's not the best contemporary novel out there, but if you already have it, or really wanted to read it before, then go for it. Do it. Otherwise, skip it.

3 stars. Maybe it was a feeling of apathy that held me back? I don't know. But I wasn't wild about this book. However, I enjoyed it, and I am happy that I read, finished, and reviewed it.