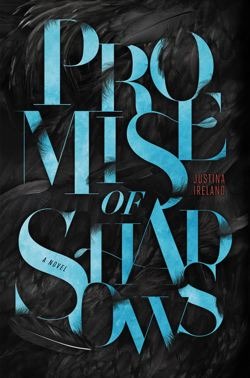 Zephyr Mourning has never been very good at being a Harpy. She’d rather watch reality TV than learn forty-seven ways to kill a man, and she pretty much sucks at wielding magic. Zephyr was ready for a future pretending to be a normal human instead of a half-god assassin. But all that changes when her sister is murdered—and she uses a forbidden dark power to save herself from the same fate.

Zephyr is on the run from a punishment worse than death when an unexpected reunion with a childhood friend (a surprisingly HOT friend) changes everything. Because it seems like Zephyr might just be the Nyx, a dark goddess made flesh that is prophesied to change the power balance. For hundreds of years the half-gods have lived in fear, and Zephyr is supposed to change that.

But how is she supposed to save everyone when she can’t even save herself?

I love Greek and Roman mythology, you all. Well actually, I love most types of mythology - including Norse and Egyptian and so on. But Greek mythology is definitely my favorite. So when I read the synopsis of this book months ago, I knew I had to read it. Yes, my rating shows that I did not enjoy this book as much as I had hoped I would. But I'm glad I gave this book a chance.

Zephyr was sent to Tartarus because she killed a minor Æthereal (god), which is basically impossible for the vættir (non-god, non-human race, like Zephyr, who is a Harpy). But the Æthereals - especially Hera - are suspicious, and want to know how she did it. No one knows about Zepyhr's dark powers - shadow vættir are not supposed to exist anymore. So Zephyr escapes from Tartarus with the help of some friends. Thus starts the race to defeat Hera and her army of Acolytes from stealing shades and shadow vættir.

I liked the use of mythology in this book - and Ireland's adaptation of mythology. The author definitely added her own interpretation to Greek mythology, which was cool. All of the stories and legends and mixed-up families was so like the original Greek mythological tales. I liked Ireland's spin on things.

The plot, the characters, the romance, the pacing, the mood, the execution, the inconsistencies. There were so many things that niggled at me while I was reading this book, and I should have written them down as I was reading. I did NOT finish this book in one sitting, which made me sad. It did not hold my interest at all.

So, the plot. The plot was so boring. This book was so boring. I mentioned that I did not finish this book in one sitting, that the book did not hold my interest. I literally FELL ASLEEP while reading this book - no joke. Granted, it was a Monday after my four classes, and it was the first day of classes after a four-day weekend, but STILL. This book was NOT exciting. I wasn't thoroughly invested. The plot was all about stopping Hera from stealing shades and destroying the shadow vættir.

Honestly, I still don't really understand the point. I don't really get why Hera was stealing shades and bent on destroying the shadow vættir. Actually, I think I understand the latter. But the former? Why? And why was that so catastrophic? Why didn't the gods (Æthereals) intervene directly, if it was an Æthereal behind everything, and they knew it? One Nyx is NOT stronger than one Æthereal. So that makes no sense.

I did not connect with a single character. And I didn't like any of them. They seemed flat and one-dimensional to me, and not the types to which I could relate. I can't stand flat characters, and I especially can't stand when I can't connect to characters on some level. Also, there were a ton of secondary characters, and I feel like none of them were really fleshed out.

The romance. Blah blah blah snooze. The romance was so boring. I could see the attempt at an angst-filled romance, but it was an ATTEMPT, and it so did not work. Instead, I was really hoping that either Zephyr or her love interest would die - or both. I seriously did not care at all if they did not end up together, or if one died, or whatever. So... the romance was pretty badly done.

I was not a fan of the pacing. Most of this book was sitting ducks, or whatever the phrase is. There are a ton of paragraphs and pages involving long explanations and stories and history. No thank you, let's get to some action. The action scenes were few and far apart, which was annoying, because the non-action scenes were really boring. So, the pacing wasn't the best. It was too slow.

The execution of this novel was (overall) pretty poor. The concept was really cool, and Ireland's spin on Greek mythology was fabulous, but the execution of the actual story was not so good. It's bad when your reader could care less about basically everything. And doesn't understand what's going on or why things are going on or so on.

I already mentioned a few inconsistencies (like with the gods not intervening), but the fact that I noticed more than a few at all is a red flag to me. For example, I also noticed something about Zephyr's hair. I thought at one point, when she incinerated everything, Nanda had to cut off all Zephyr's hair, really short. But then at the end of the book, Zephyr's curls were back. What? From that point of the hair-cutting to the end of the book, only a few weeks passed (like maybe three at the most). Hair does NOT grow that quickly, to that length anyway.

Anyway, those are the not-so-great things about this book (for me). Another thing - I really thought this book was a standalone. But the ending is a bit ambiguous. Well, I won't be reading future novels in this series (if it does end up being a series), so that's that.

Heh. Not really, no. I was so ecstatic to read a book involving Greek mythology, but it was such a disappointment. The negatives highly outweigh the positives. Heck, I had a hard time FINISHING this book, and STAYING AWAKE. Save your time and sanity and read something else!

1.5 stars -> rounded up to 2 stars. I'm actually not sure why I'm giving this 2 stars as opposed to 1 star - probably because I really WANTED to like this book. Oh well.