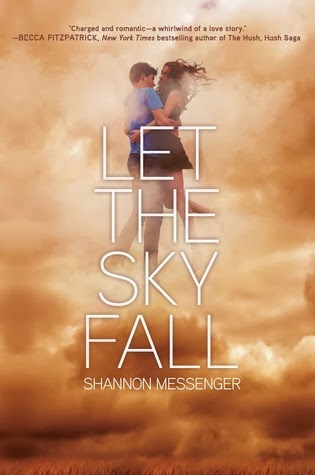 Vane Weston should have died in the category-five tornado that killed his parents. Instead, he woke up in a pile of rubble with no memories of his past - except one: a beautiful, dark-haired girl standing in the winds. She swept through his dreams ever since, and he clings to the hope that she's real.

Audra is real, but she isn't human. She's a sylph, an air elemental who can walk on the wind, translate its alluring songs, even twist it into a weapon. She's also a guardian - Vane's guardian - and has sworn an oath to protect him at all costs.

When a hasty mistake reveals their location to the enemy who murdered both their families, Audra has just days to help Vane unlock his memories. And as the storm winds gather, Audra and Vane start to realize that the greatest danger might not be the warriors coming to destroy them, but the forbidden romance growing between them.

I was actually really surprised by how much I enjoyed this book! I'm pleased that I enjoyed it as much as I did, but I'm surprised. I'd read a fair amount of positive reviews for this book, when it initially came out last year, but then I read a few reviews that pretty much picked this book apart. Those few negative reviews from bloggers I actively followed were enough for me to put off reading this book for about a year.

But then I had to go and request this book from Edelweiss, and of course I was approved, so I had to be sure to read the first book (this one) before reading the sequel. Good time to binge-read, right? If only I had the third book, too. Then I could read the entire series and be happy.

Vane survived a category-five tornado, and he remembers one thing: Audra. For years, he sees Audra in his dreams, the one thing from the fatal storm that seems to be consistent in his non-memories. But the Audra comes back. And she reveals everything to him - including the key facts that he is a Westerly, a future king of the Windwalkers, and the future of the Windwalkers.

This book is split into Audra and Vane's perspective. We get Vane's perspective first, so I immediately bonded with him first. Usually, the first character introduced is the one I like more. I wasn't always a fan of Audra (especially with what she did - she seemed to be the reason for all of the "bad"), but I didn't mind Audra.

In Audra's mind, Vane seems to be a bit obnoxious and cocky and irritating. In Vane's mind, Audra is perfect and broken. In MY opinion, Vane is a bit cocky and sometimes obnoxious, but I think he is also scared yet determined. He is confident, but he also recognizes the fact that he has no idea what he is doing. Audra is NOT perfect. She is definitely broken up over what happened years ago, and she shoulders the blame, the burden, and the responsibility of basically EVERYTHING.

All of that said, I definitely preferred Vane's perspective to Audra's perspective. I found Vane more interesting than Audra, and more authentic. Not that Audra wasn't authentic, but I didn't like her voice as much as I liked Vane's. But I DID like the dual-perspective dynamic - Messenger definitely did a great job in making the voices unique and interesting, and it worked in this book.

The majority of this novel is focused on Vane and Audra training and preparing for the Stormers (I think they are called Stormers?) and Raiden to come. This didn't bother me too much, but it was a little bit slow. A lot of discoveries and plot twists happened during this time, but actually events, meh.

Otherwise, the plot of this book was pretty good - straightforward, with several plot twisters (hehe, wind pun!). I enjoyed the book from start to finish, and wanted to keep reading. I read this book from cover to cover in one sitting, which was nice. I can't wait to read the second book! Which is hilarious, because I'm reading it tomorrow.

As I said before, I think the romance was a bit insta-lovey. Like, immediately upon seeing Audra, Vane sees to become obsessed with her. I know he's been seeing her in his dreams for years and all, but he just becomes ENAMORED. Audra falls in love more gradually, which was nice (and interesting) to see.

I'm also kind of mad at Audra, for basically causing everything (she didn't REALLY, but that's how it seems). Like, a bird is not that important. But then I'm also mad at another people, like Audra's mother, for being a jerk, and Raiden, for being power hungry in general. I guess I don't like these events and characters, but I see their purpose. Sort of.

And I mentioned that the plot was a bit simplistic - meaning, the majority of the book was spent following Vane's training with Audra. Cool, but at the same time, can other things happen? Also, I'm a bit confused about how everything went down in the end, but I'm just going to roll with it and read the second book. Sounds like a plan, right? Right.

Also, I think the majority of the Windwalkers are full of BS. They want to pin the future of their race on one boy, on one person. They have all these rules and terms and conditions laid out for him, his entire life planned for him. It's like he's going to magically adjust to being a Windwalker (after seventeen years of NOT using his wind-related abilities), and he's definitely going to leave his old life behind and agree to everything they want to do (including that bit with Solana... um, NO). Full of BS, I say.

3.5 stars -> rounded up to 4 stars. This book was pretty great! I can't wait to read the sequel. Check out my review, coming tomorrow (February 17th) on my blog!