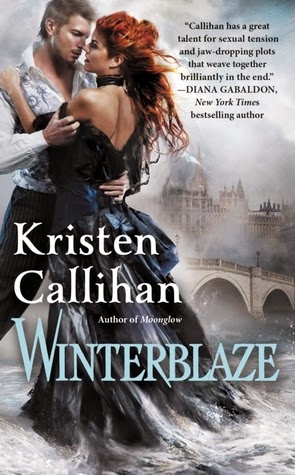 Poppy Lane is keeping secrets. Her powerful gift has earned her membership in the Society for the Suppression of Supernaturals, but she must keep both her ability and her alliance with the Society from her husband, Winston. Yet when Winston is brutally attacked by a werewolf, Poppy's secrets are revealed, leaving Winston's trust in her as broken as his body. Now Poppy will do anything to win back his affections . . .

Their relationship is now put to the ultimate test.

Winston Lane soon regains his physical strength but his face and heart still bear the scars of the vicious attack. Drawn into the darkest depths of London, Winston must fight an evil demon that wants to take away the last hope of reconciliation with his wife. As a former police inspector, Winston has intelligence and logic on his side. But it will take the strength of Poppy's love for him to defeat the forces that threaten to tear them apart.

I've been meaning to read this book for a really long time now. Like, I had it before its release date last year. Yep. That's about a year or more, that I've had this eARC! It was one of my first eARCs, and I'm sorry that I waited this long to read it. I'll be honest, I had trouble getting into the novel, and I was slightly deterred by the length. But it wasn't too bad, and I enjoyed it.

The synopsis kind of confused me. I didn't realize that Winston left London after the werewolf attack. The beginning of the book was all about how Winston ran from Poppy (according to Poppy), and how Poppy betrayed Winston (according to Winston). But then we find out that a demon is after Winston, and Poppy is the head of the Demon Police (or whatever), so the two are (sort of) reunited.

Except that Winston is still so angry at Poppy for her betrayal (she didn't tell him about her, um, supernatural job, even after fourteen years of marriage). And Winston doesn't want her protection, or his wife involved in such dangerous matters in general. Especially when something comes to light - Poppy really should NOT be involved.

This book is really long, but it's pretty action-packed. Or at least, it's interesting enough that the length didn't matter to me too much. I enjoyed the twists and turns, the constant curveballs, and slowly figuring out what was going on with the demon. It's fascinating the way Callihan sets up this book - she does chapters in the present, and chapters in the past, alternating throughout the book. There is a very important reason for that, and I thought it was pretty cool.

I really like Winston. I was definitely on his side the entire time. I admit, I didn't like Poppy much at all. But Winston... I felt really bad for him. I feel like he was at the butt end of all the jokes, got the shortest end of the stick, etc. Poor guy! I mean, his wife kept something HUGE from him. Before they got married, he gave up everything for her - literally, EVERYTHING, and in my opinion, that made the betrayal so much worse.

But I enjoyed seeing the growth of these two characters in this book. It was lovely to see them reconnect and fall in love all over again. Their chemistry and passion never dimmed - in fact, if anything, it grew with the distance. Despite my dislike for Poppy, I'm glad that the two of them got their happy ending.

I have the next book - Shadowdance - and I hope to read that one soon! I'm really interested in Jack and Mary Chase's story. Personally, I'm a huge fan of Jack.

As I mentioned before, I really did NOT like Poppy. And when you don't like the female protagonist... there's a problem. I found her to be way too controlling and hurtful. I definitely blamed her for just about everything, because her decisions are what brought on everything with the demon and Winston's fate. Okay, not all of them, because the demon was pretty twisted, but many, many things, I blamed on Poppy.

Also, I just didn't like her personality. I mean, I like feisty and stubborn, but she was just TOO feisty and stubborn. She was definitely too independent and domineering for me to like her. Personally, I don't think she was ready for that next step in life that popped up and became super important later in the book. She so does not deserve Winston - he's too good for her.

And the paranormal aspect - maybe it's because I'm coming into this series at book three, but I wasn't really feeling the paranormal aspect. This is historical London with demons and werewolves and creatures, and there is a Demon Police (that's what I'm calling them - it's really something like SOS) that counters them. Oh, and the Demon Police is led by Poppy. Who, by the way, is a woman, and knows a bajillion different ways to kill a demon (or human), and knows many different types of combat.

Yeah, no. Not plausible, even in the world of demons - in the HISTORICAL world of demons. I just did not really buy the whole paranormal aspect, and that was a big let down, because that's a huge part of this book. But I wasn't feeling it.

Yes and no. If you read and enjoyed the previous books in this series, you'll probably enjoy this one. But it's not worth starting the entire series, JUST to get to this one. I have a good feeling about the next book though.

3 stars. I actually quite enjoyed this one, but there were some things that brought down the rating to what it is (for me). But it wasn't a bad read!