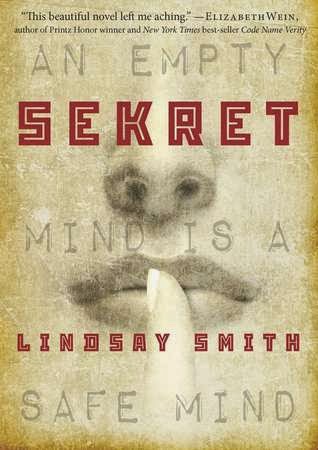 An empty mind is a safe mind.

Yulia's father always taught her to hide her thoughts and control her emotions to survive the harsh realities of Soviet Russia. But when she's captured by the KGB and forced to work as a psychic spy with a mission to undermine the U.S. space program, she's thrust into a world of suspicion, deceit, and horrifying power. Yulia quickly realizes she can trust no one--not her KGB superiors or the other operatives vying for her attention--and must rely on her own wits and skills to survive in this world where no SEKRET can stay hidden for long.

Ooo, I'm surprised that I liked this novel so much! I kind of hate saying that, but it's true. To be honest, I had no idea what this book was about when I received the review copy. I didn't really know about it, and I didn't request it, but at the time, I didn't want to say no. I'm glad I didn't! I was happy that I liked this book as much as I did.

This book is set in the 1960s, in Soviet Russia. Yulia has the ability to see the past history of an object, just by touching it. She doesn't really know how to control her power, but she can't let anyone know about it, in order to protect her mother and disabled brother. But one day, the KGB take her, and hold her mother and brother hostage, giving Yulia no choice but to work for the KGB, with other "gifted" young adults. These peers have mind control powers as well, such as seeing possibilities in the future, seeing a place from far away, controlling what a person thinks, and so on.

Sergei is really nice, and has a great personality. Masha is a complete b****, and her twin brother Misha has the male personality to match. Larissa is nice, but she is the one that sees the possibilities in the future. Valentin is the one who can control and wipe a person's memory - which makes him the most dangerous. Ivan... I can't remember what Ivan does, but he and Larissa are dating.

Nevertheless, I really enjoyed reading about this cast of characters. The story is told from Yulia's perspective (first person), and I liked her voice. She is vigilant, constantly afraid for her mother and brother, constantly questioning everything, giving off the "ice princess" persona that she really is. I like her though. I really like Valentin - he truly is mysterious and brooding, but because of his power, he sort of has to be. I dislike the twins, but for all the best reason. Larissa, Ivan, and Sergei are really important secondary characters, especially Sergei. I didn't really see his role in all of this, not completely, anyway.

The teens work together to help the KGB sniff out traitors, specifically people that want to the plans and designs of a Russian space shuttle (or something like that). But another person who can control and wipe memories, like Valentin and Rostov (Rostov is the head of the operation of the teens), pops up, and this book isn't just about finding traitors - it's about protecting the teens (especially Yulia) from the scrubber and his team. Except... are THEY the enemies? Or is it the other way around?

The book is really interesting, once it picks up. I really enjoyed the historical aspect to this book, and that helped my interest. Smith did a really great job of portraying 1963 Soviet Russia, and the state of mind of the citizens. The first few chapters really captured the attitude. And we are constantly reminded of where the novel is taking place, as the novel goes on.

The romance is one of things that caught my attention. At first, I thought the romance was going in one direction. Then I was like, that's too obvious, it has got to be Yulia and someone else. Anyway, I'll let you all figure out the romance - but if you see anyone mention a love triangle, DON'T BELIEVE THEM. There are two males that could have potentially formed a love triangle with Yulia, but no. It's all Yulia and one guy. And their relationship is slow and gradual and beautiful. I absolutely loved watching them fall in love - it wasn't really immediate.

Well, suffice it to say, I enjoyed this book! I'm glad I gave it a shot, because I ended up really liking it! There is a really cool science fiction aspect to this book (I mentioned the mind-controlling powers). The abilities are explained by experimentation in the genes of the teens, so I would classify this book as science fiction, and not paranormal. Just clearing that up.

I hope to read the sequel when possible! I'm glad I gave this book a chance. What a fantastic debut!

What I Did Not Liked:

I think my biggest "problem", which wasn't really a "problem", when you get down to it, was that it took a while for me to get invested in this book. I didn't really get into the story until Yulia did something surprising that involved a brass key (when you read the book, you'll know to what I'm referring). That's when things sort of changed, especially between Yulia and Sergei and Valentin.

But up until that point, I was a bit apathetic. I was just waiting for Yulia to try to escape again, to take a few steps back in order to plan her big escape. And for the climax to come - probably something to do with the American scrubber. My point is, I had a good idea of what was going on until that point. At that point I mentioned above (with the key), I still had an idea of what would happen, but this time, I felt more invested, because of Yulia and Valentin.

Yes! And not just to fans of historical fiction, but also to those who love a good paranormal read - but this kind of paranormal is more like science fiction paranormal. In fact, I'm not even going to call it paranormal, because the abilities are supposedly the result of experimentation and genetic modifications. So. Science fiction fans will find this interesting (I know I did). And the romance is pretty great (and this is coming from the love triangle hater). So this book could appeal to many people!

4 stars. What a fabulous debut! I do hope to catch the sequel, when it becomes available for review (or when it comes out). I'm coming for you, Skandal!